Although it was too late to sign in at reception, the cheerful security guards waved us through to follow the narrow dirt road winding through thickets of acacia interspersed with open grassland until we found an ideal camping spot overlooking the dam.

It was so peaceful watching the play of light on the water, first as the sun set and then as the reflection of lights on the opposite hill skittered across the dam. All too soon the balmy night became alive with insects of all shapes and sizes attracted to the lamp outside the tent. There was hardly room for the wall to be seen in the ablution block either, it was so covered with insects.

The level of the dam is low. It nonetheless hosted a sizeable group of Egyptian Geese, Darters, and even a Fish Eagle. A herd of impala came down to drink at the edge of the dam and a herd of wildebeest shuffled away in the darkness next to the ablution block as I approached, torch in hand. 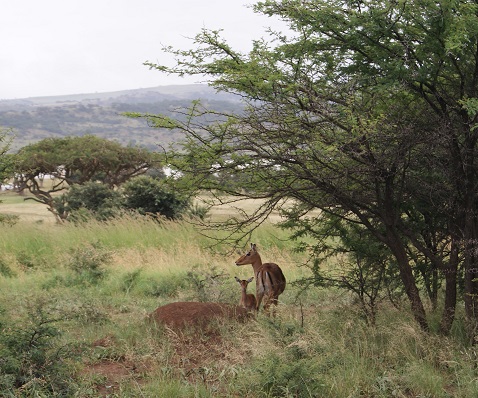 A terrific storm blew up seemingly from nowhere during the night: thunder rolled across the sky, lighting flashed brightly, and a strong wind buffeted our tent as the heavens opened in a deluge of rain – setting the pattern for the next two nights. Fortunately, we remained snug and dry within the tent.

We used the Spioenkop Game Reserve as a convenient base from which to explore historical battle sites, graves, forts and monuments within the districts of Estcourt and Colenso. Each day we encountered wildebeest, impala, zebra, eland and giraffe as we drove to and from our camp site.

One of the more amusing sights was that of a female employee walking nonchalantly through a herd of about eight giraffe gathered near the reception block. When one seemingly blocked her path, she merely waved her hand at it as one might swish away an annoying fly. They must have grown accustomed to each other.

It was with a degree of reluctance – despite the wet weather – that we broke camp, watched closely by a herd of eland and wildebeest nearby. We had enjoyed the serenity and natural beauty of the reserve and look forward to spending more time there in the future. 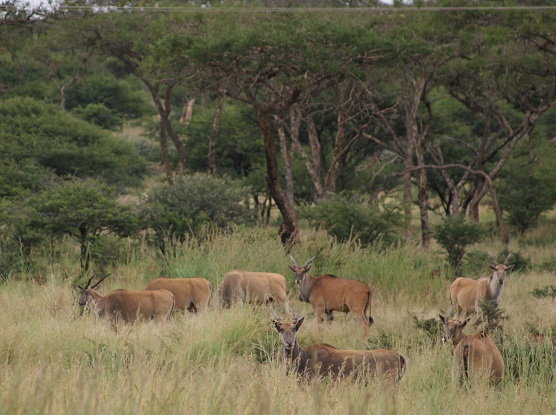