The delightful news was going to be that the long-suffering pair of Lesserstriped Swallows finally finished rebuilding their mud nest during the first week of February. A bit late in the season for breeding, I thought, however that instinct to procreate must be hard-wired into them. Sadly, the nest fell down only a week later. Such have been their ups and downs that I am unable to tell whether or not they have raised any chicks this summer.

Meanwhile, the Whiterumped Swifts that moved into the snug nest the swallows left intact last year have bred successfully. As they tend to flit into the nest after dark and leave before sunrise, it is only the lack of their mess under the nest that suggests they now have migration on their minds. This picture of a young Whiterumped Swift was taken near Brits last year. 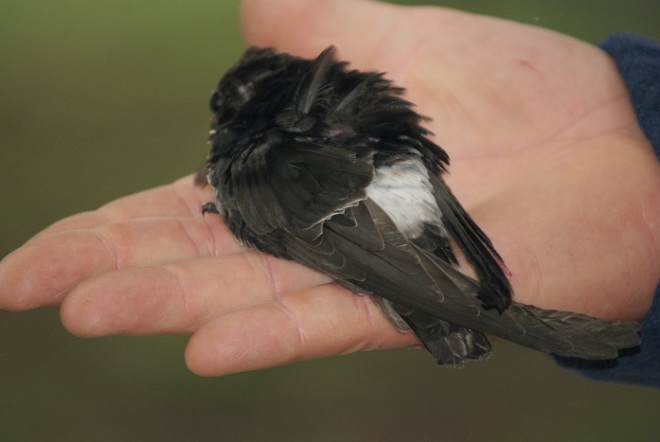 I welcome the sound – and sight – of African Green Pigeons and Redwinged Starlings feasting on the first figs of the season. They are joined by Speckled Mousebirds, Cape White-eyes, Common Starlings and the Knysna Turaco amongst others. The Knysna Turaco regularly flits about the branches of the large Natal fig tree chasing one bird after another, as if to establish its right to be there.

The sound of Redfronted Tinkerbirds fill the air akin to a conference of tinkers beating their pots at different times – they are not at all easy to spot, especially since the trees have responded to the rain this month by ‘bushing out’ their foliage. A single Yellowfronted Canary made a brief appearance a few days ago.

We have also had exceptional views of the local Gymnogene (African Harrier-Hawk) flying very low over the garden for several days in a row. On one occasion a plucky pair of Forktailed Drongos mobbed it. I have already devoted a post to the Spotted Thickknee seen this month – a wonderful sighting that was!