The Black-backed Jackal (Canus mesomelus) counts among my favourite animals to see in the wild. I have spent hours watching their social behaviour in the Kgalagadi Transfrontier Park and enjoy spotting them in the Addo Elephant and other National Parks. These omnivores have a special character about them: they look bright, alert and trot in the veld with a rather jaunty air, like this one in the Kgalagadi.

One of my favourite things when camping in the wild is to listen to the high wailing calls and yelps of the Black-backed Jackals from early in the evening through to the dawn. Sometimes you can make out the calls of one being answered by another and then another until there is a chorus of them. This, along with the call of the African Fish Eagle, is one of the iconic sounds of the South African bush. The one below was photographed in the Addo Elephant National Park.

Black-backed Jackals are often regarded as cunning, intelligent scavengers which are quick to arrive at the scene of a lion kill, for example. One can see them darting in and out to get whatever they can of the feast – all the while keeping a wary eye on the lions and hyenas! The kill featured below – in the Kruger National Park – was already a day old and the main feeders had already left it. Only an old and sickly lion was there to ineffectually defend it, with vultures, spotted hyenas and Black-backed Jackals ready to pick the carcass clean. 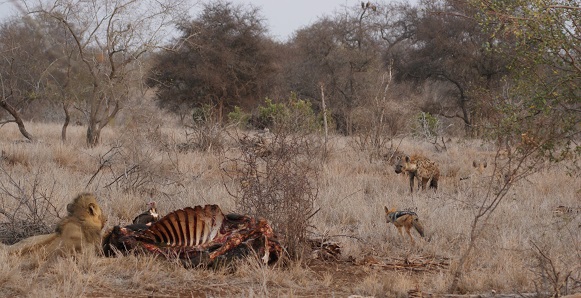