The African Sacred Ibis (Threskioruis aethiopicus) are depicted in Egyptian murals – evidence of their role in religious life there, where they represented Thoth, the Egyptian god of wisdom, knowledge and writing.

These predominantly white ibises are common all over South Africa and are easily identified by their heavy decurved black bill, used to look for food in mud and shallow water or grass and soil, as well as the black edge to their flight feathers. They also sport a conspicuously naked black head and neck. 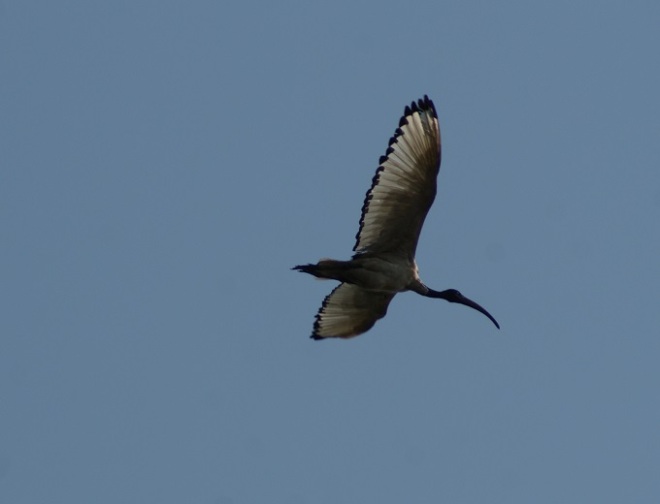 The head and neck of juveniles are covered in a fine, black down and they do not gain their full adult plumage until they are about three years old. The one pictured below is probably still a juvenile, given the remnants of whitish feathers still visible on its head and neck.

Here it is again, looking for morsels in a car park.

Flocks of these birds gather near a dam just outside of town and some still fly into town during the late afternoon to roost somewhere in the CBD. Several ‘roosting trees’ have been removed by irate residents over the past few years, yet the birds still find sanctuary in others for the night. Note the dirty yellow flanks of this breeding adult.