This story was inspired by a post written by Don Reid, about an abandoned house he came across whilst out birding. You can read about it here: https://mostlybirding.com/2018/12/30/a-house-abandoned-a-mysterious-shoe/

The story is about the shoe he found there:

“Well Saartjie.” Oom Koos sighed so heavily it seemed all his air was escaping into the heat that sat upon them like a heavy blanket. “We might be brandarm, but we can enjoy a view money cannot buy.” Oom Koos waved his gnarled hand slowly from side to side, encompassing the spectacular view stretching from their stony garden across the dry valley towards a series of hills fading to blue in the distance until you couldn’t tell where they ended and the sky began.

It hadn’t always been like this. There had been a time when Saartjie had grown bushels of vegetables at the back of their tiny house. In some years the pumpkin vines threatened to enter the kitchen. That was when little Krisjan used to peep into the large yellow flowers, convinced he would find a kaboutertjie or a fairy sleeping inside. Saartjie made a delicious stew from the pumpkin leaves in those days. She sometimes even stuffed pumpkin flowers with lamb mince flavoured with chopped up leaves of the wild mint that grew next to the small mountain pool that had served them so well until the Big Drought.

Oom Koos swirled the last of the mint-flavoured hot water around his mouth before setting his enamel mug carefully on the stone step next to him. Saartjie tried hard, she really did. He could still remember those days when she and Krisjan went to collect mint leaves. On her own the trip would take no more than half an hour. With Krisjan in tow it could take well over an hour. Not only did he stumble over the loose rocks, but his attention would be drawn to butterflies, to beetles, and to the tiniest of flowers that blossomed in that harsh climate. Saartjie was so patient. In time he had had to learn to be patient too. Krisjan … they had nurtured such hopes for him. Oom Koos spat out some of the dried mint leaves still lodged in his mouth; he much preferred it when Saartjie used fresh leaves.

He turned stiffly to look at her lined face staring resolutely across the valley. The hot, dry wind had tugged wisps of her steel-grey hair from the plastic combs, making it fly about her face. It hadn’t always been like that.

Saartjie’s long jet-black hair used to be held in check by means of a firm plait that kept to the middle of her back. He loved watching her washing and rinsing her hair in the large metal basin balanced on a flat rock outside their kitchen. When they were first married, she would sometimes let him comb out the knots. Oom Koos looked fondly at his wife, seeing her long black tresses set free in the candle light before she joined him in their wooden bed softened only by a lumpy coir mattress. Somehow they had never got round to replacing it.

After Krisjan was born with one leg shorter than the other, there never seemed to be spare money for anything. Saartjie’s vegetables were often exchanged for meat or fruit. Krisjan needed the best if he was to grow strong. Oom Koos’s sheep grew fat on the flimsiest of grass cover and the small, tough leaves of the stunted shrubs on their pocket handkerchief parcel of land.

A fresh-faced young man arrived on horse-back one day and introduced himself as the new “Agricultural Extension Officer.” They had coffee then – what wouldn’t he give for an aromatic mug of coffee now – which Saartjie had served in large mugs and sweetened with condensed milk. The young man had spoken to him about grazing, and the ‘carrying capacity of the land’, and how much water each sheep drank per day. He warned Oom Koos about changing weather patterns and about something called ‘El Niño’. At last the young man had stood up and said, “Oom Koos, I’m sorry to tell you, but you need to reduce your flock by at least ten sheep.”

Such shocking news that was hard to bear: ten sheep! He mentally calculated what the butcher in town might pay him per pound – he still thought in pounds – and answered carefully. “Three more months, Meneer. They’ll be fatter in three months from now.”

Then the young man had complimented Saartjie on her healthy looking hens and, seeing how quietly Krisjan had been stroking his horse, offered to give him a short ride.

“I don’t think Krisjan was ever happier than that day he rode on the horse with that young man. What do you think, Saartjie?” Although they spoke about him every day, Oom Koos was used to her silences.

“Those clouds on the horizon, see they are hiding the tops of the mountains …” Saartjie gripped her empty mug tightly. She still rubbed her bare left finger: they had sold her wedding ring to help pay for Krisjan’s last orthopaedic shoe built into a steel leg brace with a soft leather strap around the top. Twenty years ago now that was. Twenty years, and she still rubbed her finger. 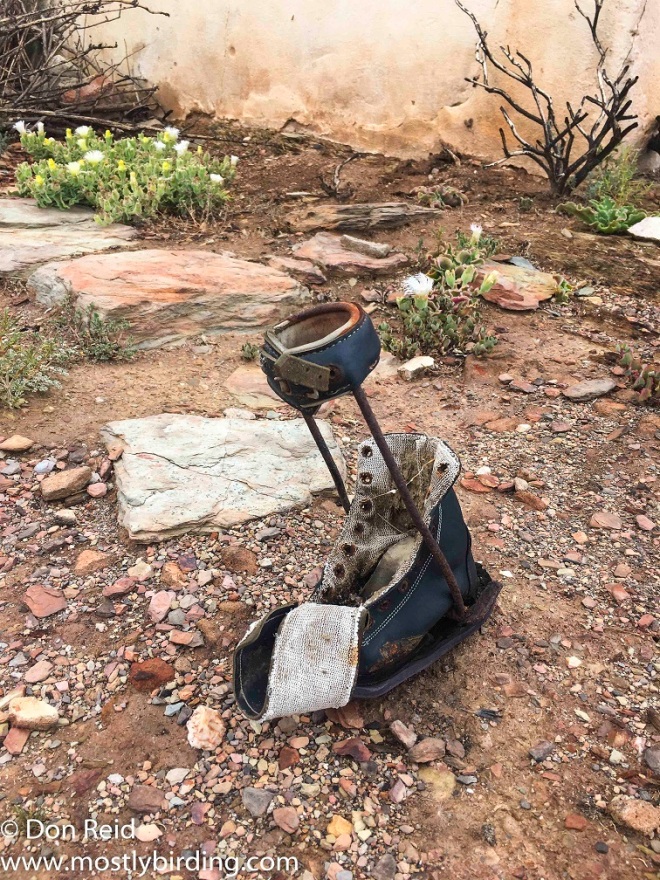 “They’re not rain clouds, my love,” he answered softly. “There is no rain in them.”

There was a time when they would sit just inside their front door watching lightning sparking across that broad expanse of sky; had listened to the echoes of rolling thunder; and had laughed at how quickly their empty containers had filled with fresh water that would save them many trips to and from the mountain pool.

Oom Koos had rebuilt the chimney outside their simple house, using red mud bricks salvaged from an abandoned shed on the next farm. He included an oven with a metal door that had once belonged to a coal stove that he had found in the scrap yard.

“Remember the bread you used to bake my Saartjie?” He touched the nape of her neck, wishing she still wore her hair long. He had been shocked to come home to find Saartjie sporting what looked like a boy’s haircut.

“My Saartjie, what happened?” He couldn’t bring himself to touch her even though she was crying while she kneaded the dough.

“I had my hair cut.” She looked at him defiantly through her tears and continued beating the dough with her fists.

“But my Liefie, why?” He could see Krisjan moving about listlessly on a blanket in the shade outside. His heart felt torn.

“I thought we were cursed when Krisjan was born.” Slap, slap, slap of the dough. “I thought the Lord had abandoned us when he got so sick.” She lifted the dough, beat it down, and then shaped it into a loaf. “I thought all that until I saw a little girl in the hospital today. A beautiful little girl, except that she had no hair.” Saartjie began shaping the next loaf. “Krisjan, as sick as he is, stroked her bald head and then her mother shouted at him to leave her daughter alone. I could hear the shame, the embarrassment and especially the fear in her voice. Sister told me later the little girl has cancer – something that eats you up from inside. She told me it is nobody’s fault. Some people are born that develop the disease – just like Krisjan.”

“Of course not! But he was born the way he is. And he gets sick. It is not our fault. The Lord is not punishing us after all.” A third loaf was being nestled into the tin. The oven could bake three loaves at a time. “Anyway, I heard wigs can be made from human hair. Ansie cut it off for me for no charge and will send it away. I have donated my hair –“

“So that someone you’ll never know will look as pretty as you.” She never grew her hair again, but hacked it off with scissors whenever it got in her way. Even now, he thought sadly.

The young man was right. This El Niño thing must have had something against them for it stopped raining. After three years the mountain pool dried up; Saartjie gave up her vegetable garden; the chickens died; his sheep died; and Krisjan developed a fever. A fire raged through the veld while he and Saartjie were searching for edible bulbs and berries. They had left Krisjan asleep in the kitchen. Too late they realised the strong wind was fanning the flames and whipping them towards the house! Oom Koos and Saartjie raced across the rough ground, arriving in time to see the burning roof cave in. 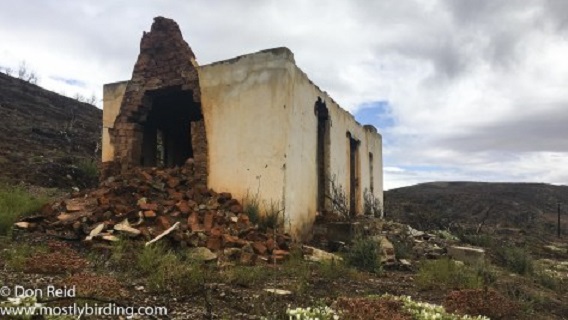 “Krisjan! Krisjan!” Saartjie wrenched herself out of Oom Koos’s exhausted grip. “KRISJAN!” She screamed and tried to pull away the burning rafters with her bare hands. The ambulance men who took his little body away left the blackened shoe behind. “He won’t need it anymore,” one of the men had told them gently.

Everything they owned was gone. Their will was gone too – gone with Krisjan. Then Saartjie got so sick … Oom Koos rested his head against the back of the chair. “We’ll talk again tomorrow Saartjie. Perhaps it will rain tomorrow.”

“Poor Oom Koos,” the nurse pulled the blanket over his knees. “In all these years he still thinks his wife is with him.” She released the brake and began pushing his wheelchair towards the communal diningroom.

“Perhaps it is because he’s blind,” her companion said.

4 thoughts on “THE MYSTERIOUS SHOE”