It is every tourist’s dream to happen upon a lion when they visit one of our many national parks. There was a frisson of excitement when a passing motorist told us of a lion a few kilometers ahead of us. “You should hear it roaring”, he said with a smile. That is unusual, I thought as we continued along the narrow dirt road and eagerly scanned the tawny grass. Indeed, we could hear it roaring moments before we were able to spot it lying in the open grassland. 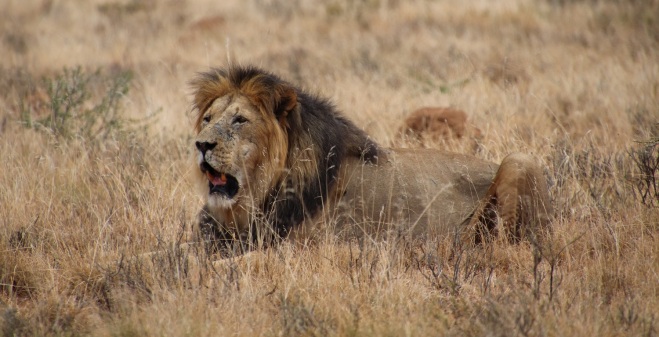 He is an old lion; the scars on his face and the teeth missing between his canines are evidence of this. Despite the heat of the day, this old lion was simply lying down in the grass and roaring – to the delight of the occupants of the two vehicles parked on the road, watching him. After some time he rose to his feet and began walking across the veld. 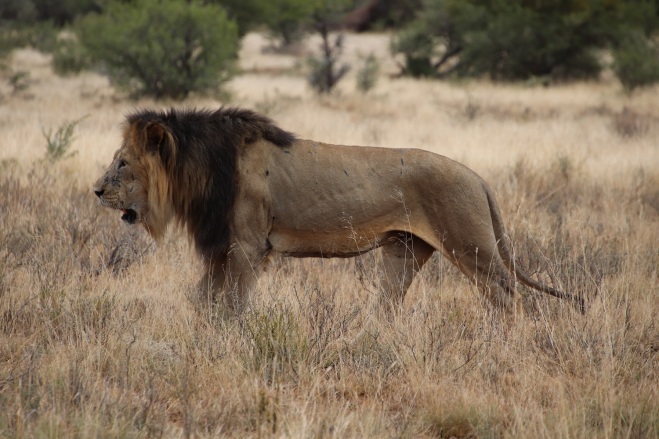 His body is covered in scars, some in the shape of slashes while others look as though the wounds had been much larger. His face is criss-crossed with scars. As he walked, we got the opportunity to see the size of his enormous front paws.

He was heading for the scanty shade cast by a scrubby thorn bush. Once there, he flopped down, looked around for a few minutes then lay flat – almost ‘disappearing’ into the grass.

The following day we came across a young lion resting just below the level of the road in the shade. Look at his smooth face and wind-blown mane.

He was content. He didn’t mind the excited whispers or the clicking of cameras. From his position on the side of the hill he was king of all he could survey … the youngster eyeing his future, while somewhere down in the valley below the older lion was waiting for the end of his.

NOTE: Please click on a photograph if you wish to see a larger image.

24 thoughts on “THE OLD AND THE YOUNG LION”