Grey Rhebuck (Pelea capreolus), endemic to South Africa, are well-camouflaged antelope unless one sees them right out in the open. They are covered with thick, woolly hair that is grey-brown in colour; their bellies are white, as is the underneath of their tails. Although they are predominantly browsers they also eat shrubs, roots and seeds. 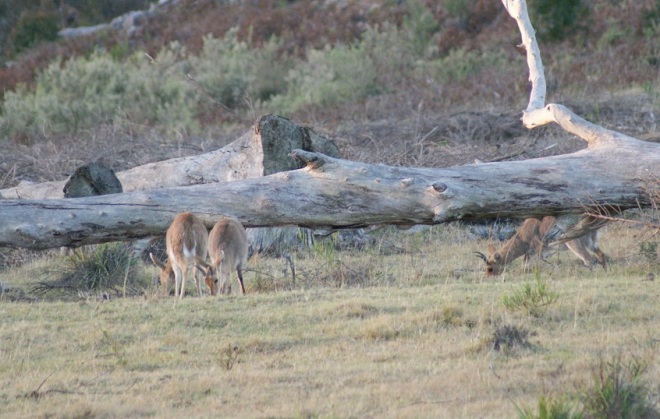 The photograph below that was taken from a distance and in poor light shows a pure white Grey Rhebuck next to a normal one. Despite the poor quality, see how it stands out like a sore thumb – there is absolutely no advantage for the white one, other than to be a target for a meal.

Why interfere with nature to breed creatures such as this?

Impala (Aepyceros melampus) are common Bushveld antelope, although they have been introduced to game farms elsewhere in the country. They are brownish with lighter coloured hair on their flanks. Impala are mixed feeders, both browsing and grazing.

The market for hunting exotic coloured animals is the drive behind breeding dark ones such as this.

I was interested to read in the article linked below that at one time specially bred colour variants of animals such as impala and wildebeest were big money-spinners: “In 2014, breeders advertised golden wildebeest for between R500 000 and R1.4-million and black impala from R190 000 to R500 000.” This is no longer the case: it seems too many breeders jumped onto that bandwagon and so such animals are no longer considered ‘rare’ and the demand for them has dropped.

So much for interfering with nature to gain a ‘buck’ or two!

14 thoughts on “INTERFERING WITH NATURE”