Despite the heat and the drought – or perhaps because of it – October has been a marvellous month for watching birds in my garden. A number of birds have been seeking out the nectar feeder. These include weavers, Black-headed Orioles, Fork-tailed Drongos as well as Cape White-eyes. The latter queue in the surrounding branches to take turns.

Sunbirds are regular visitors too, one of which is the very beautiful Greater Double-collared Sunbird. A pair of them have been flitting around the branches of the fig tree, where I suspect they may have a nest although I have not been able to see it. 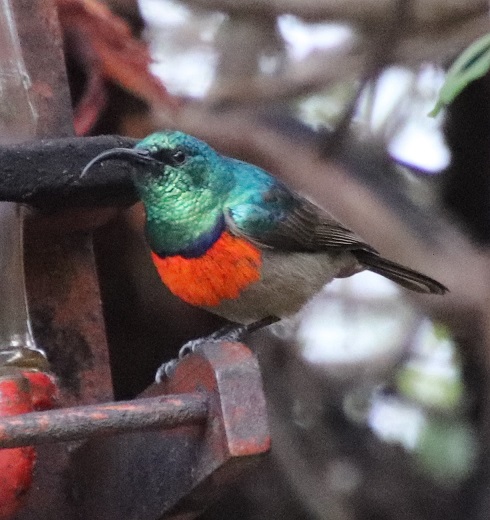 I have mentioned before that this garden seems to host one pair of Streaky-headed Seedeaters that have become regular visitors to the seed feeders, although I have observed one of them pecking at an apple too. If one arrives first, it will call to the other to join it. By the end of the month they had brought their youngster along, so now there are three.

Olive Thrushes feature regularly on this blog for they are such fun to observe. They tend to be cautious about approaching the feeding table and one is often chased off by another before it even gets a chance to sample the fruit. Then it will either fly away or scurry off into the undergrowth only to reappear as soon as it thinks the coast is clear.

Spring (not that either the weather or the environment feels or looks like spring at the moment) heralds the arrival of cuckoos. Klaas’ Cuckoo has been around for a while, but we now hear the Red-chested Cuckoo and the Diederik Cuckoo as well. I was delighted to see the Lesser-striped Swallows arrive at last – later than usual – and am even more delighted that a pair of them are attempting to build their mud nest under the eaves outside our bathroom, although where they find the mud remains a mystery. The most exciting ‘new’ bird on my list this month is a first-timer ever: a Red-throated Wryneck. You will have to forgive the quality of the photograph as it is cropped from a telephoto shot taken from underneath the enormous Tipuana tree it was perched on. It has been around for about a week.