It was Harriet Beecher Stowe (1811-1896) who is quoted as saying: The bitterest tears shed over graves are for words left unsaid and deeds left undone.

These words come to mind whenever I visit older cemeteries in some of the smaller towns and especially the many military graves scattered in the rural areas. Sadly, many of these places suffer from neglect and vandalism: headstones have been broken, metal letters gouged out, metal crosses and chains have either been broken or removed. Trees, weeds and grass grow unchecked except by diminishing numbers of volunteers. The old cemetery in our town is a treasure trove for historians, yet one wouldn’t dream of entering it alone for fear of being mugged!

Back to those bitterest tears; in chronological order come five examples of lives cut short:

Trooper W. A. Randall was killed in action at Kalabani British Basutoland in 1880. I find it particularly poignant that his age is given as 20 years and 10 months – as if to show that he was on his way towards his 21st birthday. The latter must have been as significant a milestone then as it is now. 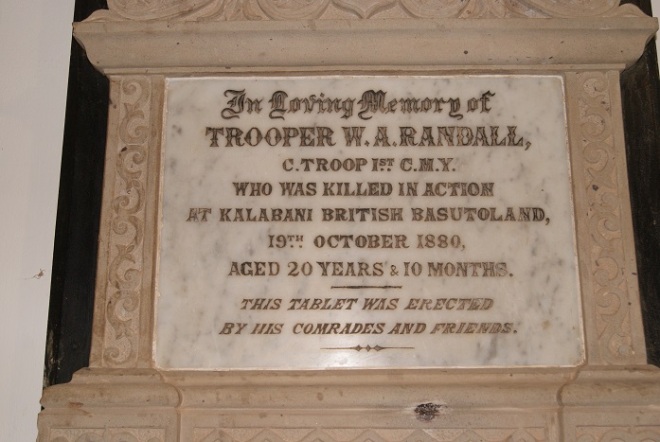 For some it is important to remember why one’s loved one died. The sense of loss perhaps assuaged a little by this – bitter tears shed nonetheless – as in the case of George J. Fitzpatrick who, aged 29, was killed at Willow Grange whilst carrying off a wounded comrade.

Here is a grave of a veld kornet who died seven months before the end of the Anglo-Boer War (1899-1902). W.H.H. Pretorius was only 27 years old – so many deeds left undone! The inscription is written in Dutch, for Afrikaans as we know it, had not yet become an official language.

Not all military men died of wounds: Lieut. F. H. Pratt-Barlow died in 1902 from enteric fever, aged only 20. 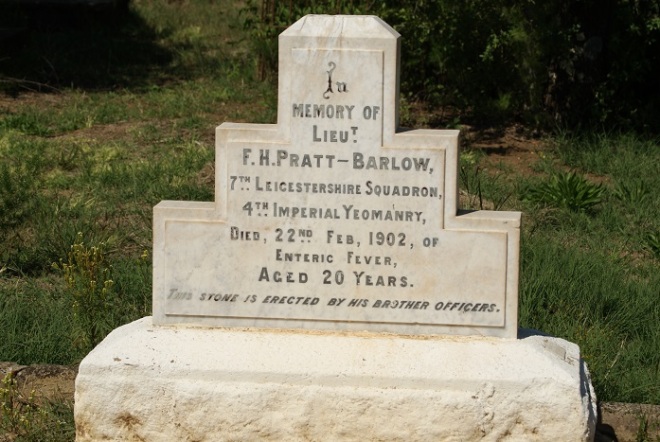 Plaques in churches tell this sad story too: Rex Montgomery Hilligan was 22 years old when he died in 1943: He too loved life but loving dared not save himself lest those he loved should pay the price.

20 thoughts on “THE BITTEREST TEARS”