In these end days of winter when most of the veld is covered with the grey-brown or faded yellow of grasses that have lost their seeds, become brittle and are – like us – waiting for the first spring rains to bring forth green shoots, any bright green leaves stand out like the proverbial sore thumb. While a host of trees and shrubs in South Africa are evergreen, we are familiar with them; with their shape, their leaves and their colour. What stands out are plants like this one that do not belong. The Castor Oil Plant (Ricinus communis) is a shrub with waxy stems and large star-shaped leaves with serrated edges. This is another invasive alien that I learned from early childhood to keep well away from for it is toxic. In fact, those reddish stems (to me) serve as a warning not to fiddle with.

The Castor Oil Plant is thought to have originated from the tropical parts of Africa and, as with other alien invasive plants, they have in the past been grown for their ornamental qualities as well as on a commercial scale here. The problem is that escapees have become wide-spread weeds that thrive in the disturbed soil along the edges of roads and open land as well as along water courses. There is one growing to the right of  the make-shift ladder which is next to a river in the following photograph.

The spiny fruits develop on an erect spike. Although castor oil is extracted from the seeds, they should on no account be eaten! The seeds are highly toxic, especially for horses, although it is interesting to read that livestock are able to ingest the leaves without any ill-effects. 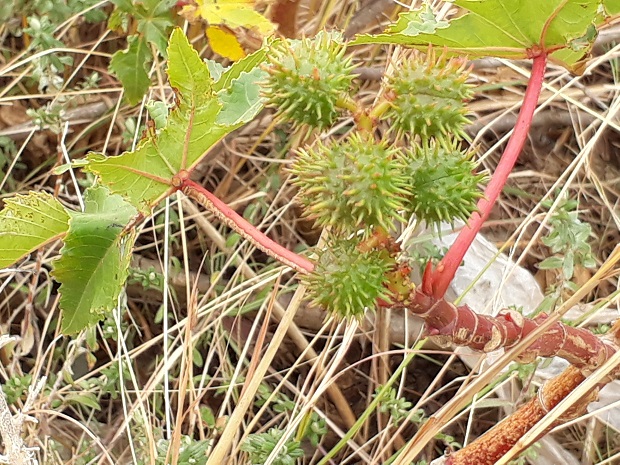 As a declared invader plant, it must be eradicated if found growing on one’s property.