I am in the throes of sifting through an accumulation of teaching files and notes, as well as stacks of pictures, posters and papers. The time has come to really let go and to make space for other interests. This tedious – and rather dusty – process reminds me of the many hours I have spent preparing lessons and notes. I recall too that I spent even more time marking assignments.

Ideally, I would have preferred discussing issues with individual pupils. The pressure of limited classroom time, the syllabus, the needs of other children in the class, as well as extra-mural activities seldom allowed for this. I turned to marking as a means of one-to-one communication, using assignments as a means of showing how various improvements could enhance its readability; pointing out errors and how to avoid them; and always finding some aspect to praise, no matter how poor the final mark might be.

Marking a stack of assignments often saw me burning the midnight oil for I believed that work should be returned at the most 48 hours after submission if my comments were to be taken seriously. I also wanted those who wished to act upon them to be able to apply their understanding to their next assignment.

Positive feedback is encouraging, and a quick turnaround is part of that. How you couch your criticism is also important if you wish to encourage a child to improve. It is because my marking was really a ‘conversation’ of sorts, that I usually eschewed the traditional red pen in favour of using a pencil or other coloured pens – all softer on the eye. Rather than simply placing an impatient cross next to an incorrect answer, I tended to point out where / how the error might have been prevented.

It comes as no surprise that none of my children opted to become a teacher of English!

Among the pages of used paper is this one – as anonymous to me as it is to you, for I recognise neither handwriting. 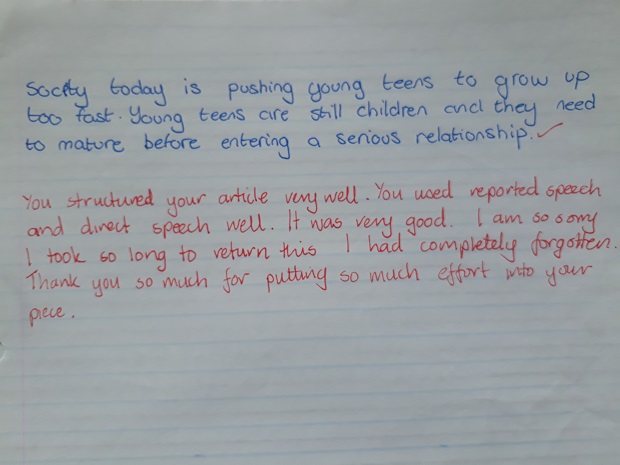 It set me thinking: to my mind, a teacher should model the good expression – including sentence structure – expected in an assignment, as part of the hidden curriculum by which we transmit norms and values. For this reason the volley of simple sentences used in the comment is jarring – their only redeeming feature is that they express positive aspects of the child’s writing. The apology might have been appreciated, but how can a teacher have forgotten to mark an assignment? I hope that the appreciation of effort put “into your piece” might have assuaged the child’s feelings and made up for what seems to have been a lengthy delay.

I am a harsh critic. To me this comment smacks of insincerity and routine reactions quickly noted down. If the child put “so much effort” into the article, surely he or she deserves an overall appreciation of it?

26 thoughts on “THE VALUE OF POSITIVE FEEDBACK”