All indigenous species of wild garlic in South Africa are named after Ryk Tulbagh, the Dutch governor of the Cape from 1751 to 1771. How I marvel at the enterprise of the early explorers, artists, writers, botanists, and administrators whose insatiable curiosity and meticulous record-keeping have formed the basis of so much of what we know about our flora. Tulbagh sent numerous South African plants to the legendary Carl Linnaeus for classification. Wild Garlic was among these.

The general appearance of both the plant and flowers of Wild Garlic resembles that of an onion. Tulbaghia violacea is the best known of the indigenous species as it is has become a popular garden plant both here and internationally. The flowers are very attractive.

Particularly useful as far as I am concerned, is that Wild Garlic tolerates prolonged drought conditions, although it obviously thrives when well-watered. This evergreen perennial with long, narrow, strap-like, slightly fleshy leaves bears pinkish-mauve tubular flowers on long stems. The leaves smell strongly of garlic when bruised, as do the flowers when they are picked. 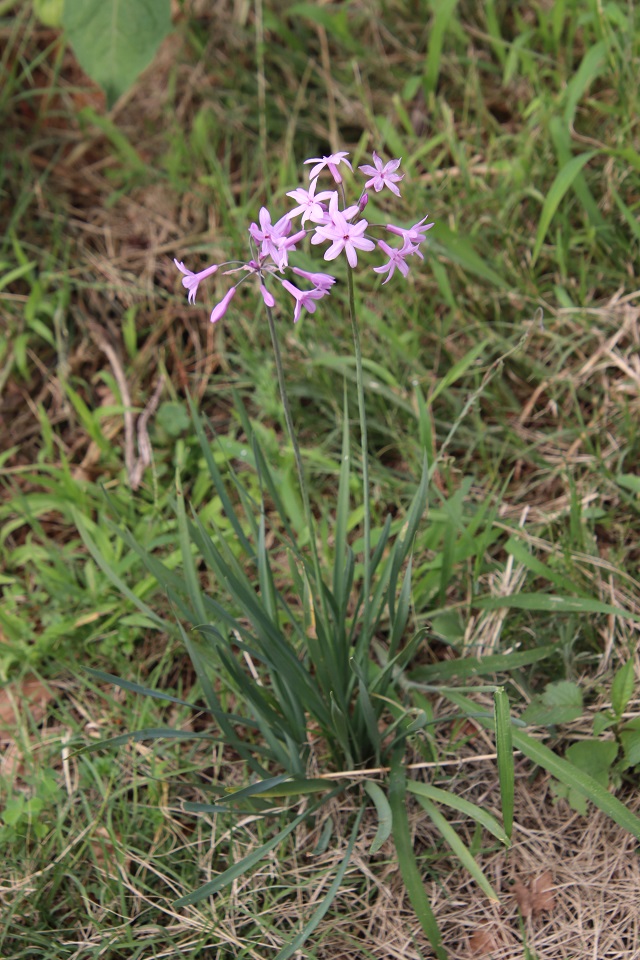 The flowers bloom in the summer, usually from about January until April. I have read a recommendation that crushing some of the leaves while one is sitting outside in the evening might help to deter the annoying presence of mosquitoes – I have not tested this theory yet, but if it works I will be very pleased as I am not partial to using commercial sprays or creams to keep mosquitoes at bay. The other aspect I have not yet tried out is using either the leaves or flowers in salads.

Wild Garlic grows throughout the Eastern Cape, KwaZulu-Natal, and in Limpopo. It multiplies by making offsets that develop into clumps and the flowers are pollinated by butterflies and bees.

This is an interesting article about Wild Garlic which you might enjoy reading: