Cattle Egrets (Bubulcus ibis) are a common sight here, especially since the occasional appearance of the Urban Herd became permanent. Interestingly, Bubulcus is the Latin word for ‘herdsman’ – they certainly do appear to keep a close eye on their ‘charges’ and their relationship with cattle, buffalo, and even zebra are interesting to observe. Each animal appears to have an egret in attendance, ready to pounce on insects flushed by these large animals as they move through the grass. I have occasionally seen an egret pecking at ticks on the tip of a cow’s tail. They are also known to feed on frogs, small mammals, worms and eggs.

These are elegant looking birds, both on the ground and especially when they catch the late afternoon sun when in flight home to their communal roosting spots. I see them flying over our garden singly, in twos or threes, and sometimes many of them together. The tree in which many of them used to roost in town was cut down in an effort to get rid of them, so I am not sure where they go, although they have been recorded as flying up to 20km to their feeding areas.

These ones appear to be resting from their labours. If you look very closely, you may count more than the alliterative eleven basking in the late afternoon sun. 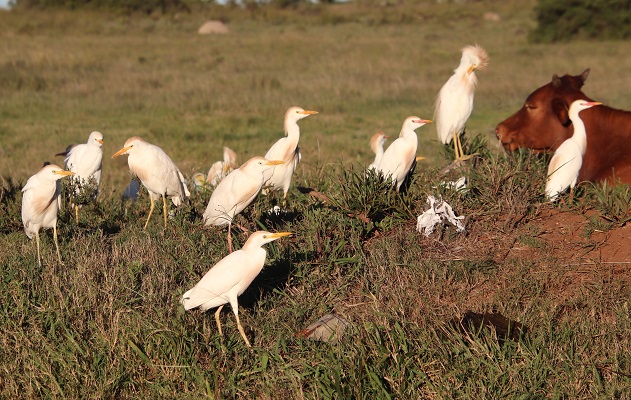