It was in 1979 that friends visited the Tsitsikamma Coastal National Park – as it was called then [it is now part of the Garden Route National Park] – and sent us a post card depicting this view of the Suspension Foot Bridge over the Storms River. The card has faded over time, yet shows the spectacular view of the bridge from the path that winds through the forest. 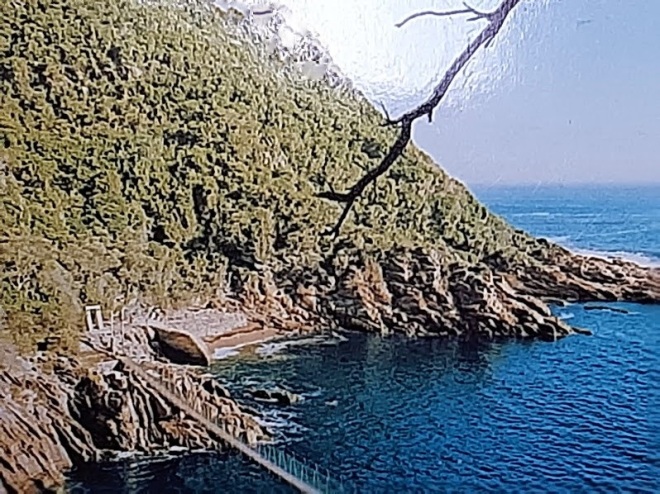 We had not yet visited the area and were taken by their description of it: We are enjoying this very beautiful place and are sure you would too. Even in rainy weather it is a lovely place to be. We were living in Pietermaritzburg in KwaZulu-Natal at the time and it wasn’t until we were living in Mmabatho several years later that we made our way down there – and fell in love with the place! So much so that we have returned many times – most recently in October last year.

Although this photograph is not taken from the original perspective, you can see how the area has been developed over the past 41 years – especially the footbridge. The original one is still there, but has been augmented by others.

Our friends continued: Unfortunately the Otter Trail is fully booked but we are enjoying the shorter walks. Great bird life!

How right they were too. There are a number of interesting walks along the coastline and through the natural forest that hugs the steep slopes of the mountains. Every time we visit there I am astounded by the number and variety of birds we see – even around the open camp sites. I have written elsewhere about walking the Otter Trail, which I did a couple of years after moving to Grahamstown.

As an aside: the postage stamp on this postcard is 3c. During the intervening years postage has increased to R5,34. Given how dysfunctional our postal service is, I wonder if people bother to send post cards anymore!

18 thoughts on “SUSPENSION FOOT BRIDGE: THEN AND NOW”