Despite having been away for a while, this has proved to be a satisfying month of birdwatching in my garden. At night and during the early hours of most mornings we are serenaded by a Fiery-necked Nightjar. An African Darter has flown over ‘my’ airspace a few times in order to make my list and Black-eyed (Dark-capped) Bulbuls have made cheerful forays to the feeding table. The sounds of cuckoos can be heard – the Piet-my-Vrou (Red-chested Cuckoo) is another clear sign that spring is here to stay.

On that note, while the sun rises ever earlier, the mornings remain fairly chilly and so it is not surprising to find a flock of Bronze Mannikins gathered in the branches of a Dais cotonifolia to warm up for a while before their breakfast:

I feature the Common Fiscals a lot in these posts, largely because they are such characters and are photogenic to boot. Spotty has even brought a chick along to the feeding area to see what the offerings are. The biggest surprise for me though was the sighting of the only female Common Fiscal I have ever seen in our garden. She did not appear to be connected to either Spotty or Meneer and I have not seen her since. Note the chestnut flanks that characterise the females: 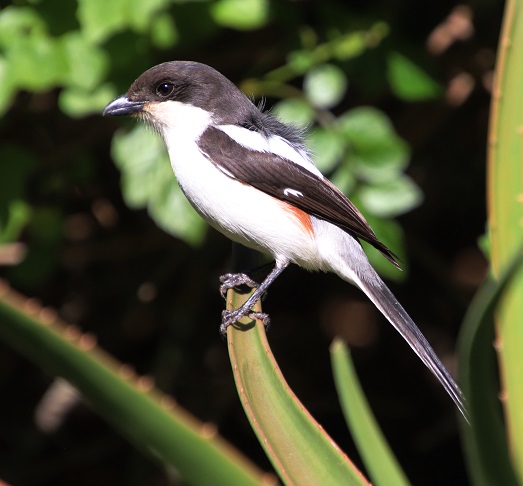 As you can see, I have purchased a new feeder – I’m not sure how well this configuration is being received, but the other one requires a thorough cleaning (when we get a reasonable supply of water again!). Here a Southern Masked Weaver is trying it out accompanied by Bronze Mannikins:

A Grey-headed Sparrow is enjoying a solo feeding session: 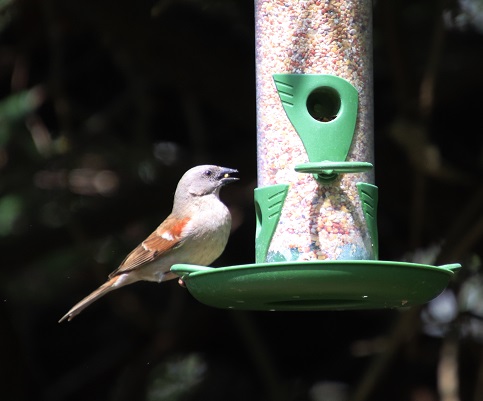 Also catching the morning sun whilst keeping an eye out for the neighbouring cats are these Laughing Doves:

I mentioned the Hadeda Ibis nest last month. So far there is no sign of either eggshells at the base or chicks on the nest, so the eggs are still being incubated:

Follow Something Over Tea on WordPress.com
Join 1,238 other followers