Although these large tortoises are often called Mountain Tortoises (probably as a direct translation of the Afrikaans name, Bergskilpad), it is also called a Leopard Tortoise – which is not surprising when you note its spotted shell. The pardalis part of its scientific name, Stigmochelys pardalis, refers specifically to its spotted shell.

Just for fun, here is a photograph of a leopard. 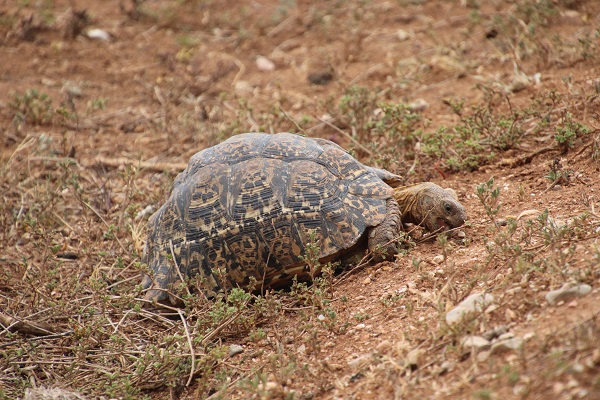 The high-domed shell provides protection from the heat of the sun. Note its tongue sticking out.

Their rear legs are well developed while the almost paddle-shaped and pigeon-toed front legs with a row of small nails is used to move very fast and easily manoeuvre over rocky terrain – which may also have given rise to its alternate name of Mountain Tortoise. 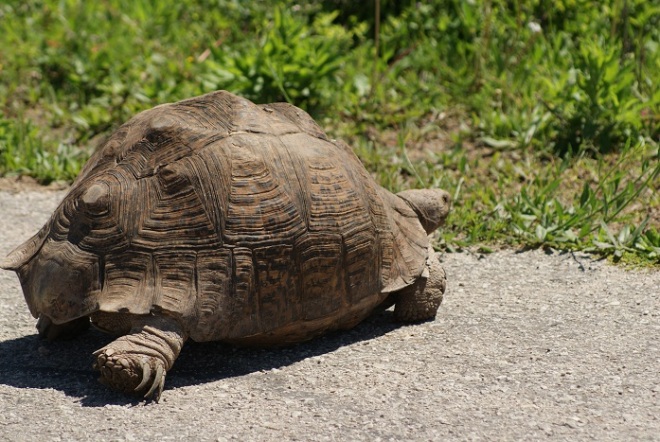 During the breeding season, males are combative, including actions such as ramming their opposition, butting and occasionally even overturning one another. This victorious one has found his female.

We have been in lock-down for ninety-five days already – despite having moved to Level Three (‘advanced’ Level Three nogal!) that allows more businesses to open, we still cannot visit family and friends nor can we cross provincial borders without a permit – and you require a very good reason to get one of those. National Parks are now open for day visitors, yet the above-mentioned restrictions make visiting the Kruger National Park out of the question. In the spirit of the photograph below, I will look back to share some of the delights of the Addo Elephant National Park which we hope to visit again before much longer.

Naturally, one goes to the Addo Elephant National Park to see elephants – they seldom disappoint. We have seen herds of over a hundred individuals congregating around the Hapoor waterhole; been surprised by single elephants right next to the road; and have enjoyed watching small groups – such as the one these two are part of – at the Domkrag waterhole. Here we are able to get out of our vehicle and look down at these magnificent animals as they go about their daily life.

You might be fortunate enough to come across a Secretary Bird striding through the grasslands.  They occur singly and in pairs – it is always worth scanning the veld to see if you can spot another one.

Zebras grace the landscape in Addo – they might occur in small groups or in much larger ones that stretch across the side of a grassy slope. They are always a delight to observe. 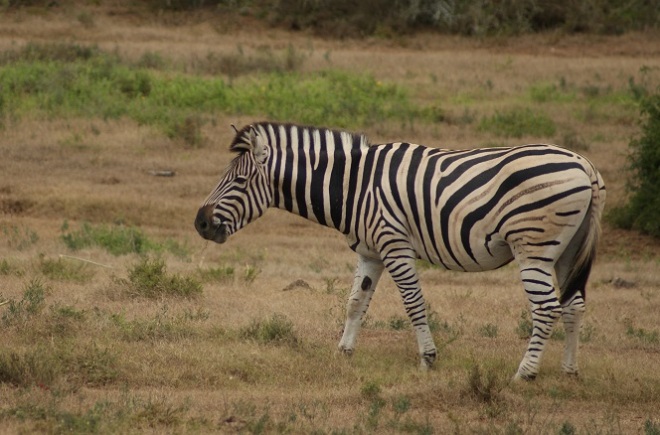 I am always pleased to come across the large Mountain tortoises that lumber through the grass or patiently cross rocky areas. This one was taking advantage of a puddle in the road after rain. 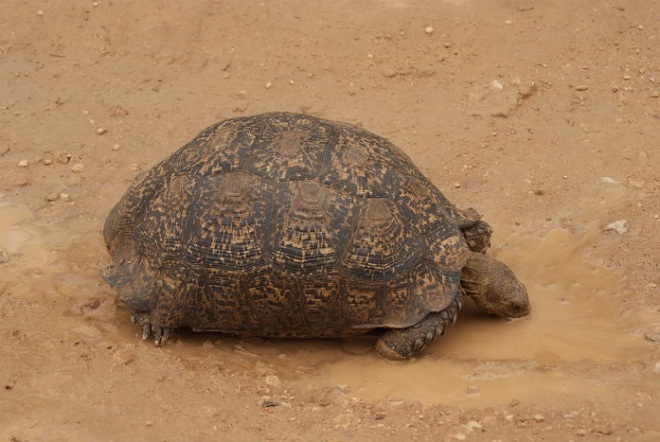 Then there are the beautiful Cape Glossy Starlings that brighten the landscape.

By keeping an eye open for more than just animals, you get to enjoy some of the many butterflies too. 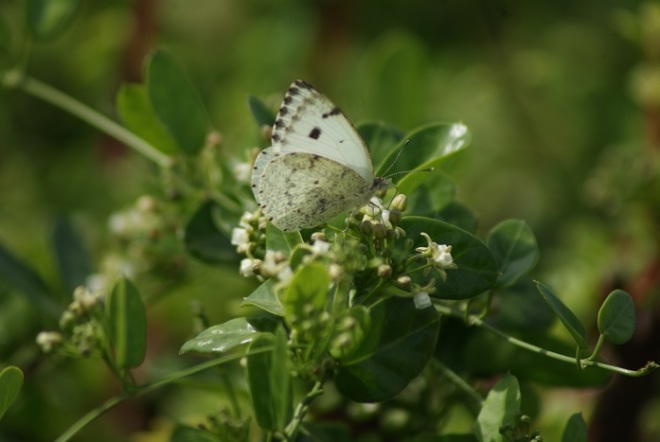 The temperature had risen to over 30 degrees Celsius and the tarred road was giving off visible heat waves when this Angulate Tortoise ventured onto the road. No time to pose for photographs it seemed to say as I poked my lens out of the window: the road is hot and I have places to go!

He nonetheless looks beautiful and still unblemished by his travels through the rough bush and over rocky ground.

Bryan, the Angulate Tortoise, has lived in our garden for over four years now. We leave him to his own devices as there is plenty of food and water for him to help himself, and enjoy our irregular sightings of him wandering around the garden. “As slow as a tortoise” doesn’t apply to him for he can actually dart across the lawn at considerable speed! He generally hides in the shade of the rosemary bush, a daisy bush, or in the shrubbery during the heat of the day and scurries out to get water or to eat before disappearing again, leaving only the sound of rustling dry leaves in his wake. 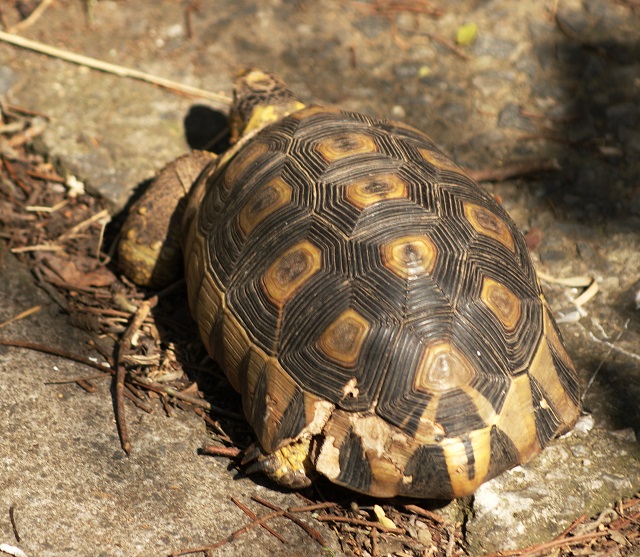 Over the years he has traversed not only our garden – managing to avoid falling into our swimming pool – but that of our neighbours too. He makes himself at home in either the one garden or the other and determinedly returns to whichever one he feels most comfortable in at the time – even when picked up and returned to where it is thought he ought to be. So it is that we never worry when we haven’t seen him for some time, knowing that he is probably either under cover or visiting the neighbours.

That is until the other day when he ventured further than ever before: our neighbour happened to arrive home as Bryan was about to disappear into the verge over the road! Somehow he had got out of the gate and allowed his curiosity to take him to pastures new. He was unceremoniously picked up and brought ‘home’ – where we have spotted him on a couple of occasions since.

Now Bryan is a creature of the wild, rather than a house pet. Regular readers might remember he was rescued from a person who wished to eat him. Of course he is free to go and the time is bound to come when he will simply disappear. Nonetheless, I am relieved that this particular adventure was interrupted for the road he was heading for carries a lot of fast traffic and he wouldn’t stand much of a chance of crossing it.