Having already given you a sense of the expansiveness of the Mountain Zebra National Park, I am  going to show you some of the roads of discovery that run through it. This is the road leading from the entrance gate to the reception at the rest camp. 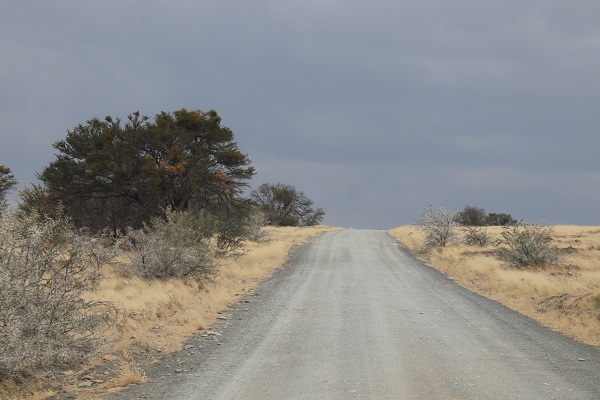 I love dirt roads with the grass and bush growing right to the edges. They spell adventure and immediately encourage a scanning of the environment on either side of it. What lies over that hump? What could be lurking behind that bush? What can we see in hidden in the dry yellow grass?

Usually the car park outside the reception area is filled with vehicles arriving and departing. Thanks to the COVID-19 pandemic it was empty, allowing a clear view of the Karee trees on the traffic island. 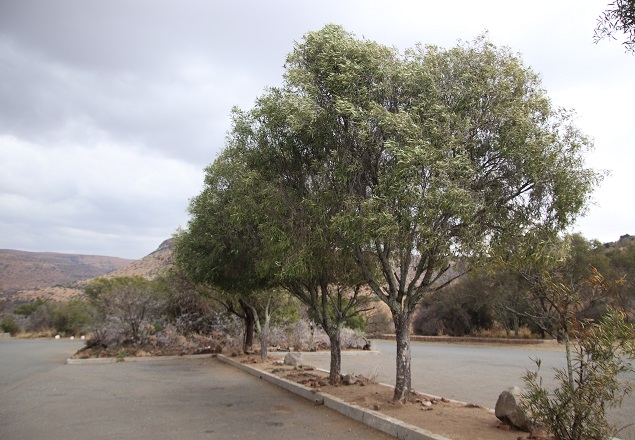 The late afternoon light not only lengthens the shadows of the grass but enriches its colour. The worn tracks indicate the narrow width of the road that winds through the patches of trees, allowing a view of the mountains stretching far into the distance. 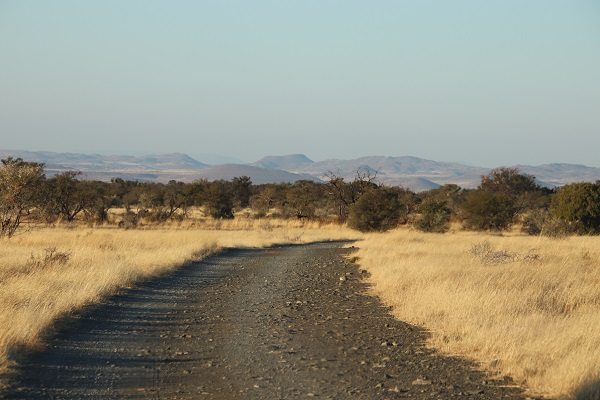 See how this steep road winds down from the plateau to the valley below – and how the view stretches to forever and beyond! 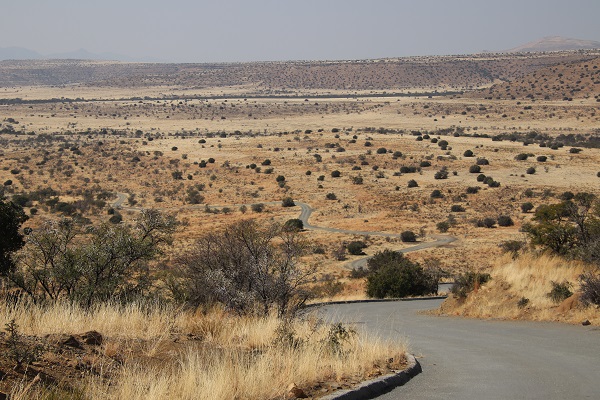 Dark-capped Bulbuls often feature in this blog thanks to their frequent visits to our garden, where they splash in the bird baths and make the most of the food on offer. They are bold and gregarious birds. This one appears to be enjoying the spring sunshine. 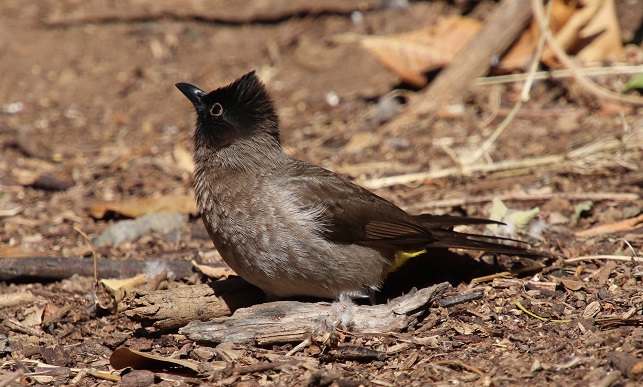 They sometimes eat the tiny blocks of cheese I put out (with the Cape Robin-chat in mind), are very fond of any fruit and make frequent visits to the nectar feeder. 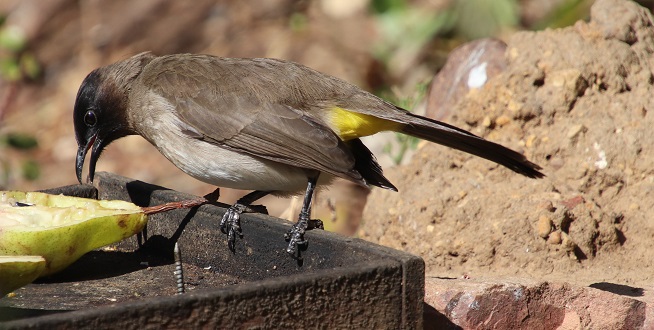 The Dark-capped Bulbuls are also enjoying the nectar and flowers on the Erythrina caffra which is blooming now. I have also observed them eating spiders and caterpillars. I am intrigued by the way they often spread their wings as well as their tail feathers when they arrive to eat – whether there are other birds present or not. 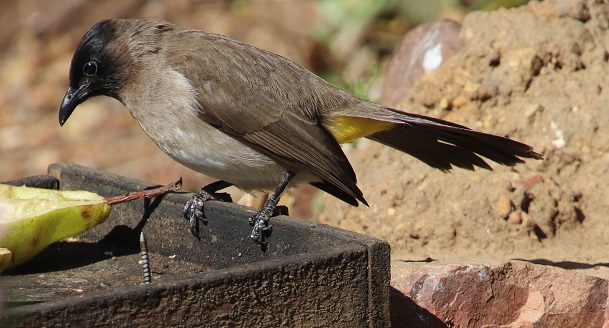 It is always interesting to come across a large bird in the veld. Ostriches are the largest, of course but others, such as the Secretary Bird and Denham’s Bustard, are easily seen striding through the grass. Helmeted Guineafowl occur in fairly large flocks that make them stand out too. One of the more interesting of the large birds, I find, is the Southern Black Korhaan (Afrotis afra). This one is a female, which lacks the characteristically bold black-and-white head and neck. 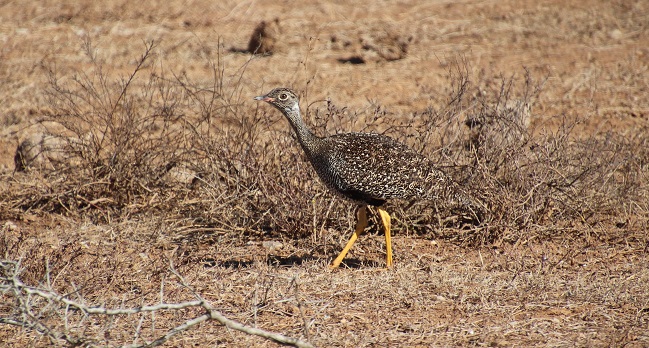 I consider myself fortunate to have seen it so close to the road as the females tend to be secretive and their cryptic colouring camouflages them well – as these two photographs indicate. 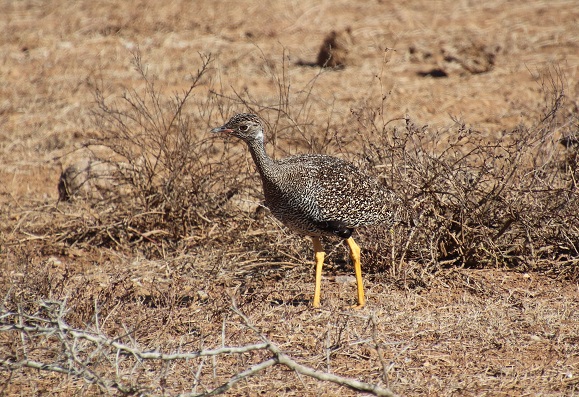 Even when the veld is a little greener, the female can easily ‘disappear’ into the veld. 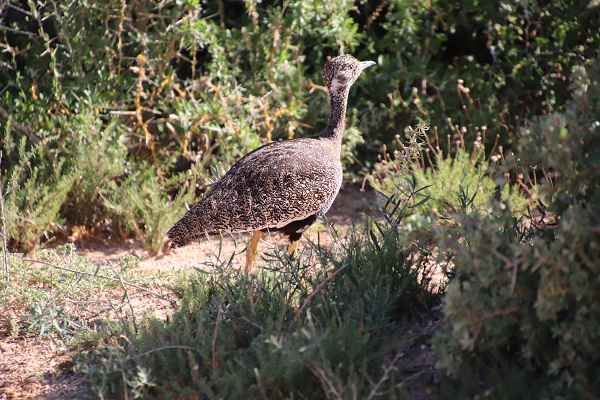 Here is a male with his striking black-and-white head. 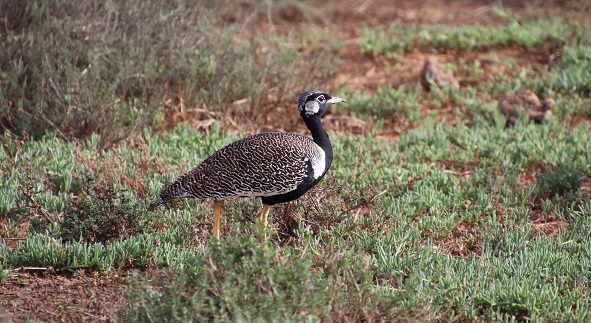 The Southern Black Korhaan is endemic to South Africa, being found in the Western, Eastern and Northern Cape. Being a ground feeder, its diet consists of insects, small reptiles and even some plant material.

The Common Fiscal gets a bad rap from many gardeners and tend to be ignored by the average person who sees one in passing. A pair of Common Fiscals were our first visitors once we had settled in at the Mountain Zebra National Park. We had no sooner put together a picnic lunch when the first one perched on a twig above us. While it observed our fare, it was joined by another. Without being bothersome, both were quick to pick up anything that messed on the table – such as a crumb of cheese. Both arrived, one after the other, at every outside meal we enjoyed. The way they behaved gave the clear impression of them being a pair. 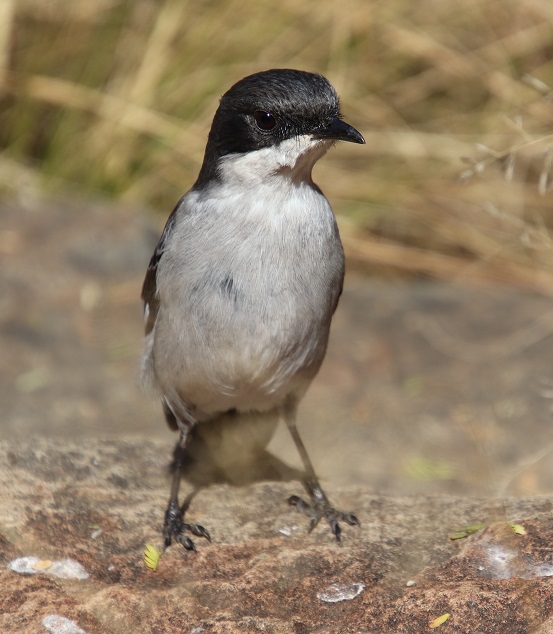 Two Common Fiscals visit our garden. The ringed one has been observed here for several years and  has often featured in my blog. I have been aware of an un-ringed visitor for a year or two, but haven’t taken much notice of either of them until the restrictions of the pandemic encouraged me to observe our avian visitors more closely. The ringed one tends to fly straight in, grab what is edible, and fly off – especially now as there appear to be youngsters to be fed. While it isn’t unduly aggressive, it is ‘business-like’ and expects to have its way on the feeding table. Both fiscals are adept at varying their route back to their respective nests.

I say ‘respective nests’ without having seen either. This is because they do not give the impression of being a pair: the ringed one has been seen dive-bombing the un-ringed one off the feeding tray, and they have had some loud slanging matches in the branches – ending with both flying off in different directions.

The un-ringed Common Fiscal is less aggressive. It perches on a high branch and observes the birds feeding below and waits for an opportune moment to pick up what it needs. I call it the Friendly Fiscal for, over the past few months, it has becoming bolder in its approach: perching just above where we are having tea and even dropping down for a titbit. Ever bolder, it began perching on the edge of a flower pot right next to my chair while I breakfasted outdoors. 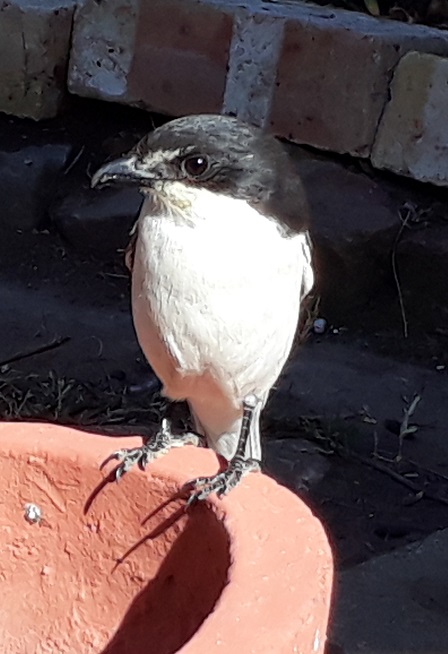 On more than one occasion it has perched on the edge of my plate (on a stool next to me) to peck at whatever was there. Once, it inspected a plate of lunch left on a chair while my husband went indoors to collect his hat. 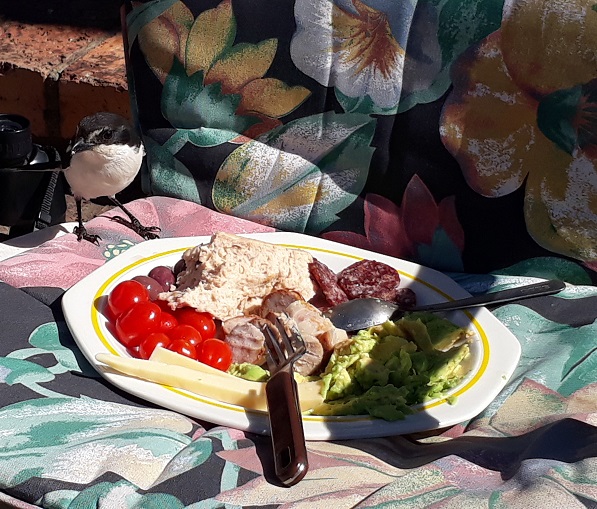 It now often sits on the edge of the table with an expectant look in its eye. 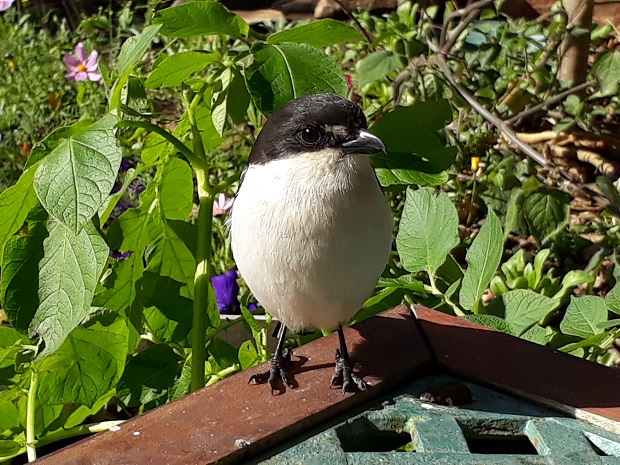 On a particularly chilly morning this Friendly Fiscal perched on the end of my shoe and looked up at me. I had no titbit to offer it, so it began tugging at my sock as if to say “What about me?” I collected a tiny piece of meat which it took gently from my hand. It now often takes food from my hand! 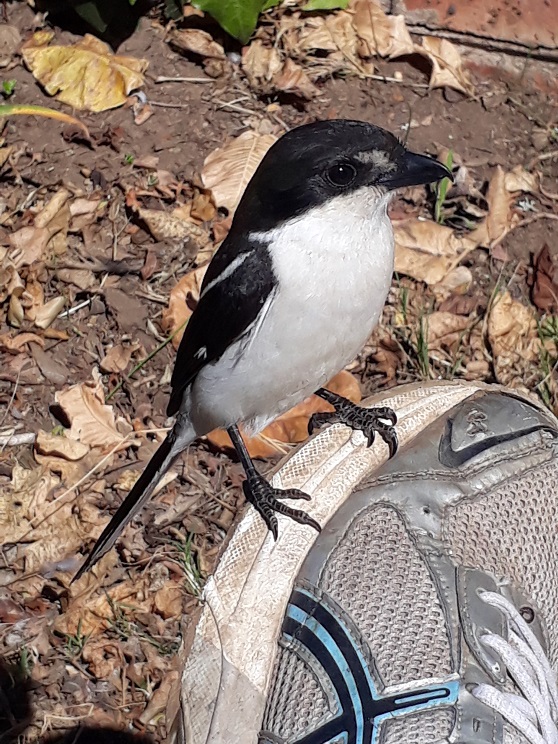 Yesterday – our first beautifully warm day for a while – I was having tea in the garden when the Friendly Fiscal perched on my toe! 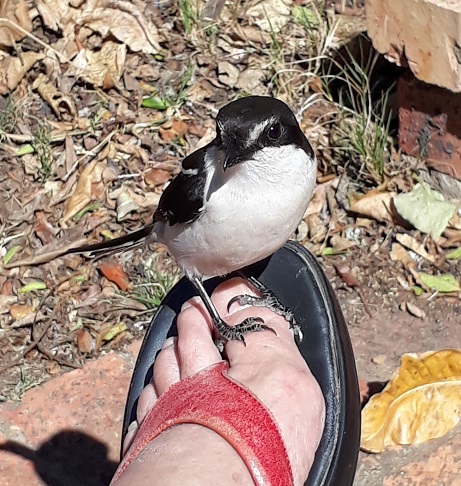 As you can tell, I am becoming very fond of this fiscal – Common or not!

Having been ‘pandemically confined’ for months and only recently being allowed to venture forth – almost inch by inch – or so it felt, it was a treat to spend a day in the Addo Elephant National Park. As soon as overnight accommodation was allowed, we opted to spend two nights at the Mountain Zebra National Park, near Cradock.

As you can see in the photograph below, the sky was heavily overcast when we arrived – that in itself has been a rare sight in our part of the Eastern Cape. Being the end of winter, the grass is dry and golden: look at the beautiful wide open expanse of the grassland with the mountain rising above it. Such space gives one the feeling of freedom! 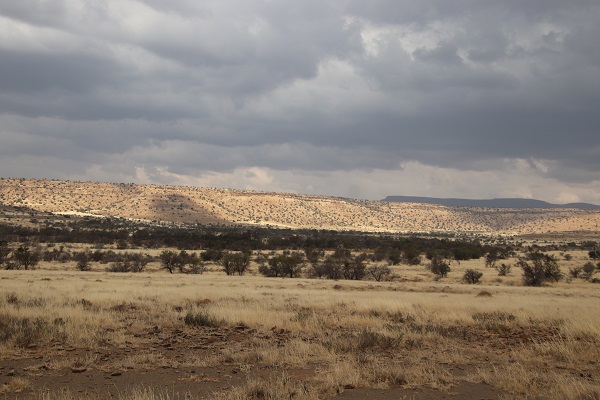 Here is a closer look at the mountain, with an ostrich in the foreground. 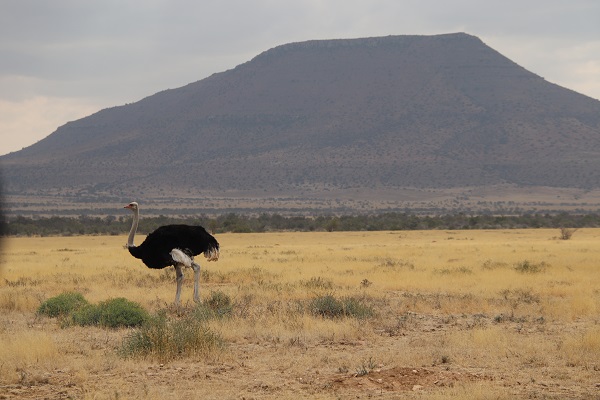 The grassland in the valley seems to go on forever. 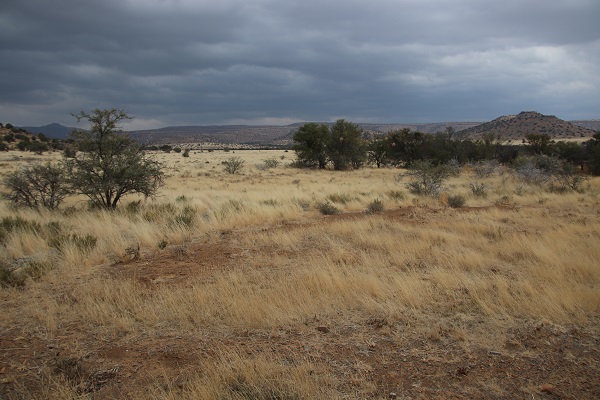 When you get close to the mountain, driving up to the plateau, you become entranced by the bulging rocks, loose boulders and the vegetation growing in between. The pale coloured trees are all Cussonia spp., known colloquially as Cabbage Trees.

Once on the plateau, you can almost see to the end of the earth – mountains and valleys that change with the light of the day. It is scenery that one can absorb in great gulps; difficult to take in all at once; the openness, the beauty, and all that space is ‘cleansing’ and healing. There is a feeling of freedom (one can forget about the pandemic there) and ‘wholesomeness’ that made me feel ‘normal’ for those few days.