I have often noticed the tubular flowers of the Cape honeysuckle lying on the ground as if something had deliberately cut them off – well, that ‘something’ has generally proved to be one or other of the weavers that frequent our garden! Keen to get to the store of nectar at the base – and having beaks far too short to reach inside – the weavers simply nip off the base of the flowers for their prize snack.

During July and into early August, I have observed the stalks of the Aloe ferox growing outside our lounge have increasingly been stripped too. This time I caught a pair of Streakyheaded Seedeaters in the act. Apart from probing the base of the flowers to get to the nectar, they also eat the buds, anthers and stamens – this picture was taken through the window:

Other birds enjoying the rich source of nectar from aloes – only they have the long curved beaks to poke into the flowers – are the Green Woodhoopoes that chuckle and cackle their way through our garden every now and then: 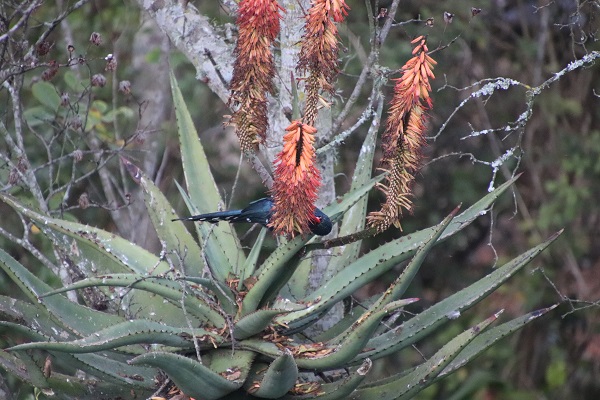 The tall Erythrina caffra tree in the back garden hosts a wide variety of birds throughout its fairly long flowering season. Cape Weavers appear to be very partial to nectar and are considered to be among the more important pollinators of aloes. This one is snacking on one of the Erythrina caffra flowers:

A Blackheaded Oriole takes a turn to feast on the flowers too:

Have you ever considered that petals are actually modified leaves? They surround the reproductive parts of flowers and are mostly brightly coloured in order to attract pollinators. Of course many of us plant a variety of flowers in our gardens because they look attractive to our eyes – others prefer to plant flowers that might be more beneficial to pollinators such as bees and butterflies. The scent of the flower can also prove attractive to both pollinators and humans.

All but the last of the flowers shown below are indigenous to South Africa. They illustrate the variety of shapes and patterns flowers come in. 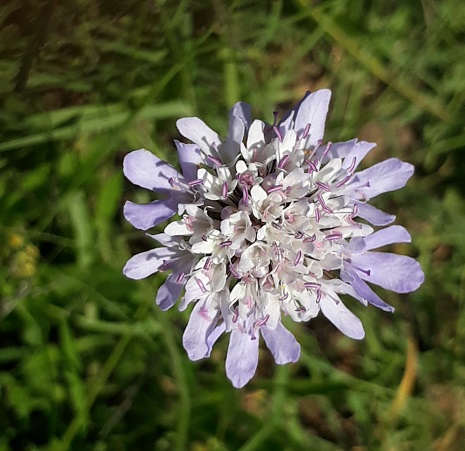 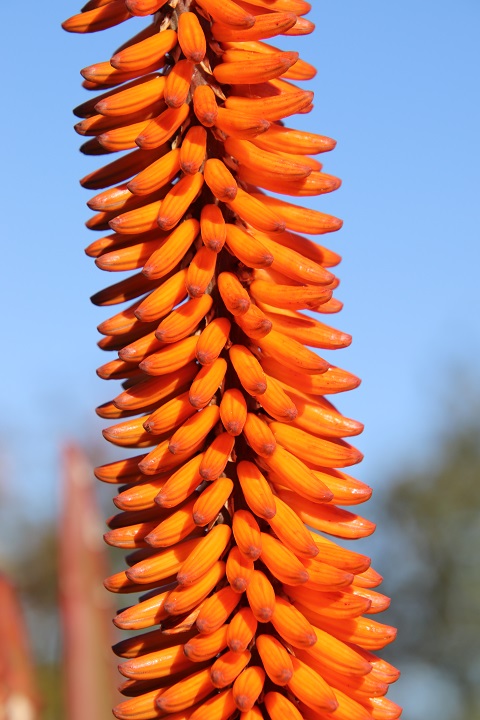 Not indigenous, but who can resist this beauty?

A number of wild flowers brighten up the Eastern Cape landscape during the year. A small, yet bright, flower that grows in the grasslands and blooms intermittently throughout the year is the very pretty Jamesbrittenia microphylla, also known as purple phlox:

I count myself fortunate to see examples of Tritonia securigera, or orange tritonia, as they often appear as single blooms with no others nearby:

Indigenous throughout the eastern parts of South Africa is the very beautiful Plumbago auriculata, commonly known simply as plumbago or Cape leadwort. It has become a popular plant for gardens and so it is special to see it growing in the wild: 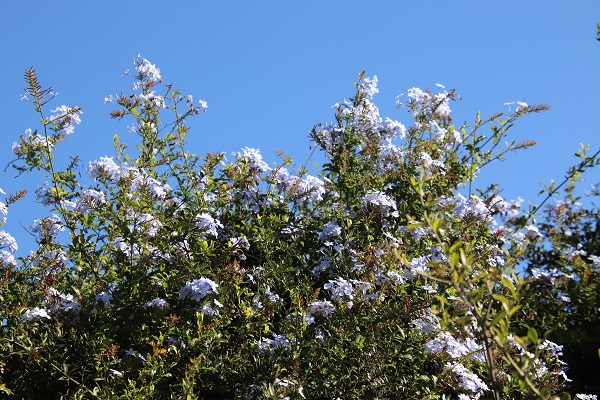 Then there is the Carpobrotus edulis. one of the many in this family commonly known as sour fig. It blooms during the late winter into the spring:

Flowers I look forward to every winter and never tire of is Aloe ferox, sometimes called bitter aloe. It is one of the most widely distributed aloes and grows well in dry areas – blooming from about May through to August:

Lastly is the very beautiful Schotia brachypetala, known as tree fuchsia or the weeping boer-boon. It generally flowers from spring into early summer: 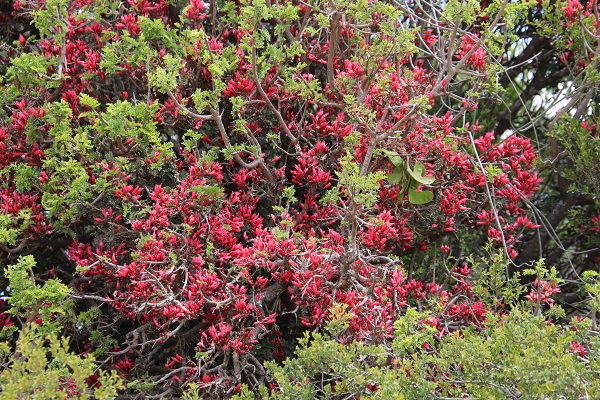 We start our view of scenes from my part of the Eastern Cape with a quick trip to Middle Beach at Kenton-on-Sea, which is only about 40 minutes from where we live.

When driving through the Lothians area, where the rest of the photographs were taken, we come across a few avenues of Eucalyptus trees like this one that were probably originally planted to provide a windbreak on the farms. 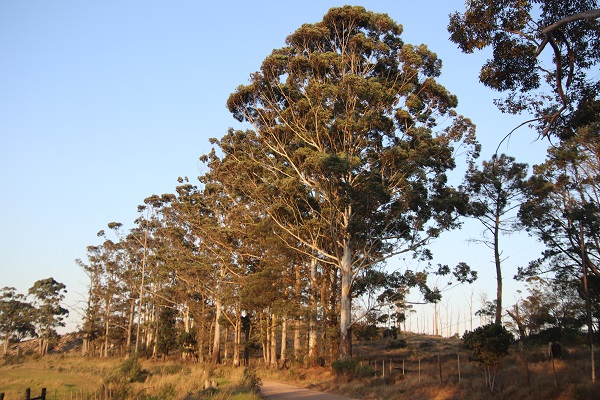 There are a variety of farms in this area so it is common to come across horses, sheep and cattle. Every now and then though we may see a warthog in the veld. 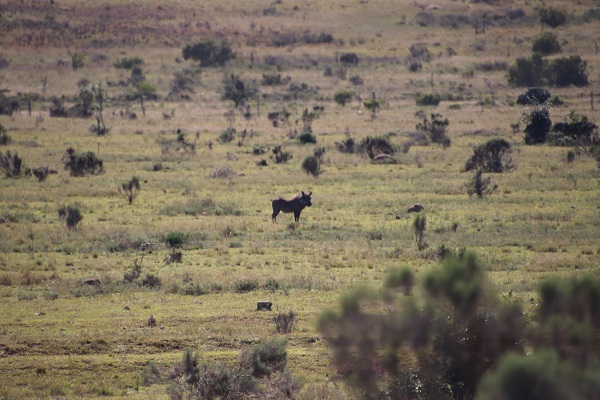 The road I regularly travel on is a dirt road with no clearly defined verges. Instead the wild grass grows right against the edges. 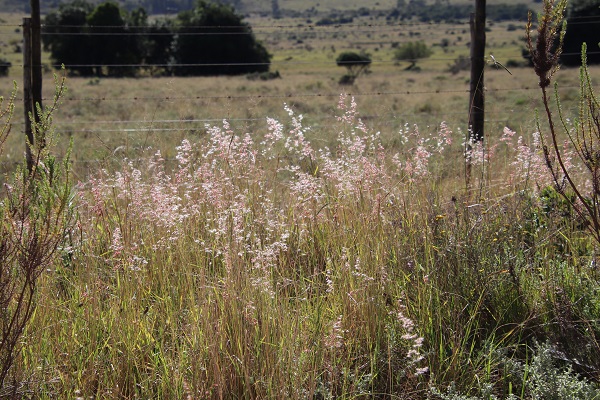 I always keep an eye out for wild flowers and, at this time of the year, purple Senecio macrocephalus are making a fine show all over the veld.

One cannot help noticing the bright orange spikes of the tall Aloe ferox dotted all about the Eastern Cape veld at this time of the year.

Shades of orange are traditionally associated with autumn and as I was walking around my garden to check on the progress of the aloes dotted about, my eye was caught by these bright spots: 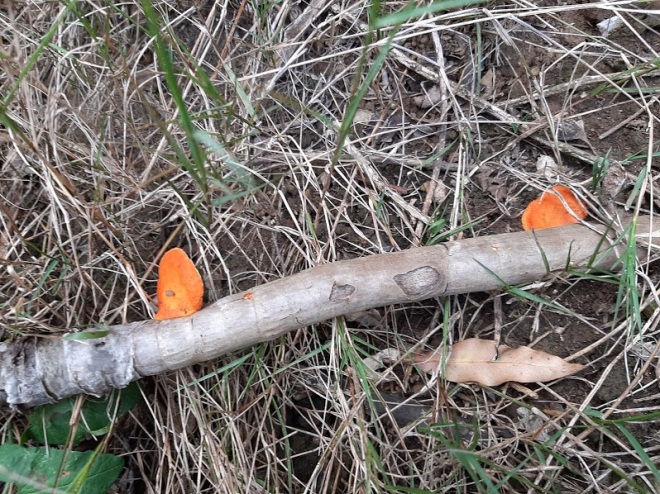 This fungi has appeared on an aloe stem and looks rather attractive when looked at more closely:

Back to the aloes though. I am heartened by the appearance of many tightly closed buds, such as this one:

The tall Aloe ferox in the front garden has been pushing up its swelling spikes unseen until now:

Soon these rather insignificant looking spikes will grow tall – you can see a discarded dry stem from last season still hooked onto the leaves – and unfurl into a magnificent display of colour. Watch this space!