It is an icy, grey day during which winter is stamping its feet in a determined fashion to freeze out any idea of spring unfurling in the wings. What better way of beating the winter blues than focusing on red: 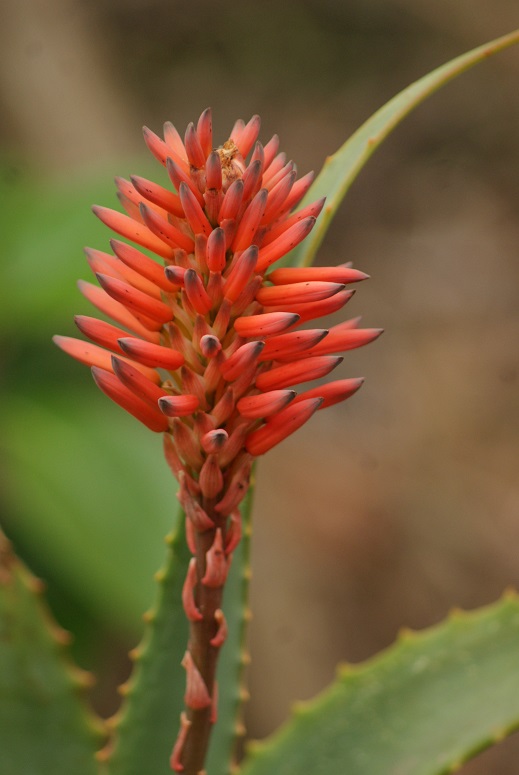 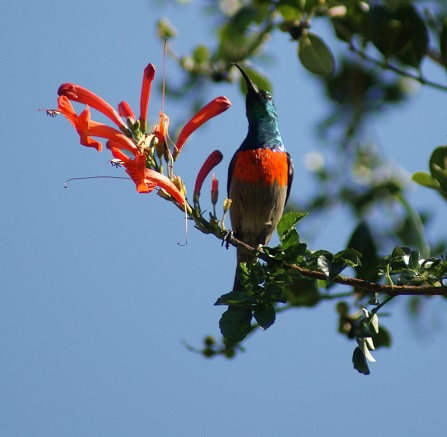 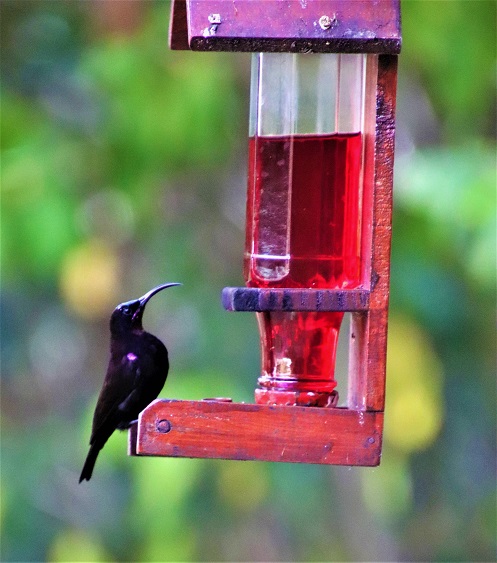 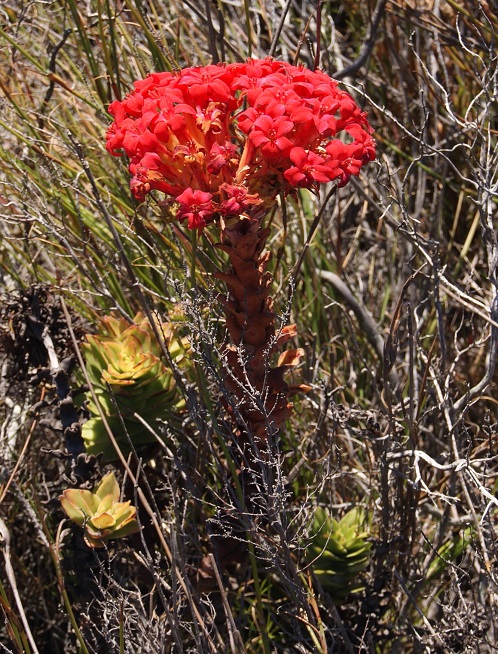 Apart from the blossoms of the Erythrina caffra trees, there is little in the way of natural sources of nectar for birds at the moment. This is why the ‘pub’ in our garden has become increasingly attractive and needs to be refilled every day – if not twice in the day. A few of the recent visitors are:

A pair of Cape White-eyes visit the pub several times a day. One usually waits on a branch nearby for its turn. They are small enough birds for a pair to perch and drink at the same time, which is delightful to see. On other occasions a small flock of them descend on the area, with much chatter has they dart in for a drink when they can.

Cape Weavers have little in the way of manners. They swoop in to drink whenever they feel the need – which is often. The blush on this bird shows the breeding season has arrived.

Here is an example of the dominance of the weavers: a Cape Weaver dislodges Mrs. Amethyst Sunbird.

Mrs. Amethyst Sunbird managed to return, yet was conscious of a Cape White-eye waiting in the wings for its turn to drink.

Lastly, a very welcome visitor to the ‘pub’ is always the brightly coloured Black-headed Oriole. 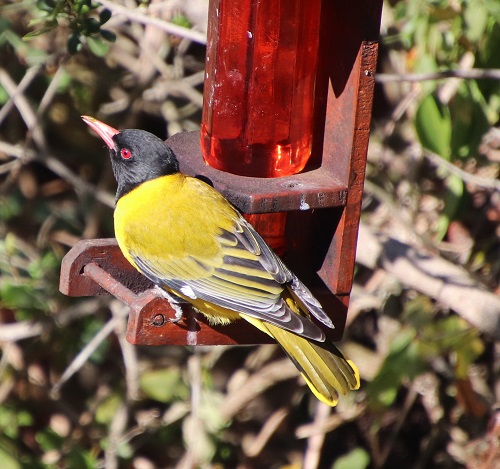 I cannot adequately convey how wonderful it is to hear the sounds of the Cape Turtle Dove in our garden at different times of the day. They used to be regular visitors to the feeders until elbowed out by the sheer number of Laughing Doves and Speckled Pigeons that wolf up the grain within twenty minutes of it being scattered outside. So, I hear the Cape Turtle Doves calling from the Erythrina trees in the back garden and see them pecking for food in the kitchen beds more often than they come to the front to see what the masses have left. Cape Turtle doves remind me of my childhood in the Lowveld and our visits to the Kruger National Park as well as the Kgalagadi Transfrontier Park, where this photograph was taken. 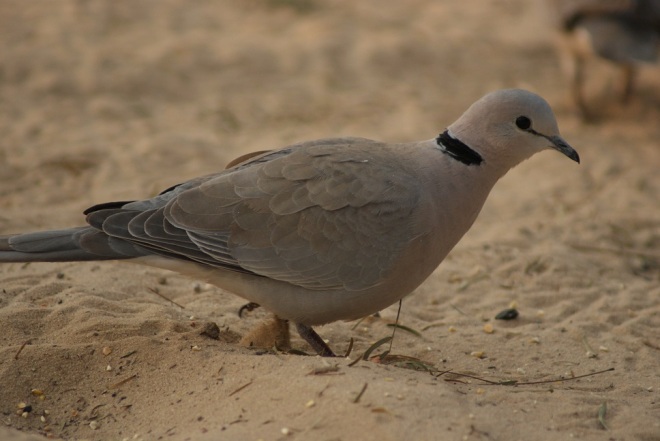 My favourite visitors are the Cape Robins that are among the first birds to greet the dawn and which come to peck at the fruit and other titbits when the garden is quiet and most of the other birds have left to seek food elsewhere. 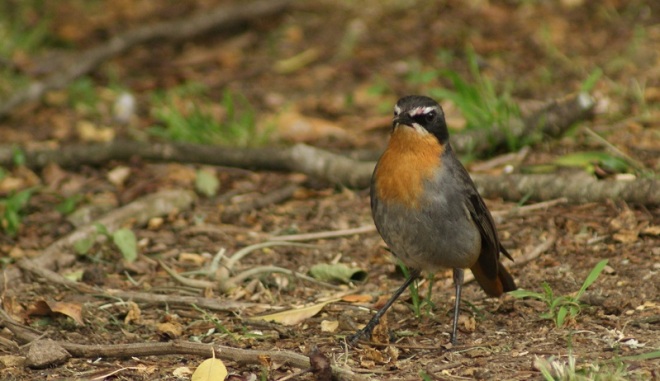 A pair of Greyheaded Sparrows also prefer to visit the feeders after the doves and weavers have left. Some of the weavers are beginning to sport their winter tweeds, yet there are still many males looking as though they are ready to find a mate. A few males have been seen carrying strips of grass to tie onto thin branches – perhaps we need a really cold spell of weather to make them realise that there is still the winter to get through!

Of some concern is that the population of Speckled Pigeons nesting in our roof has increased to the point that they may have to be moved on and we will have to reseal the eaves. They are lovely birds to look at, however the mess they make is awful – our front steps and some of the outside walls are covered with their faeces, which cannot be a healthy situation in the long run.

Redwinged Starlings have been gathering in large flocks over the past few weeks. They fly around in flocks of between fifty and a hundred, sometimes breaking off to fly in different directions and meeting up again. They often settle in the Natal Fig, only to be frightened by loud noises from passing vehicles and a cloud of black rises up noisily to whirl about again: their reddish wings look beautiful against the light.

So do the bright red wings of the Knysna Turaco. How fortunate I was yesterday morning to watch a pair of them flitting around in the trees near to where I was sitting and then to drink from the bird bath situated only a few metres away from me!

A really interesting sight was an African Harrier Hawk (Gymnogene) flying low over the garden before perching in the Natal Fig. It wasn’t there long before I saw it take off with a single Fork-tailed Drongo in hot pursuit. The Drongo chased it right across the garden and back before the hawk changed direction to fly further afield. I am impressed with the feistiness of the Drongo!

I have already highlighted my photographs of the Green Wood-hoopoes that visited our garden last weekend, so will end with a photograph of an Amethyst Sunbird that posed for me briefly, albeit in the shade: 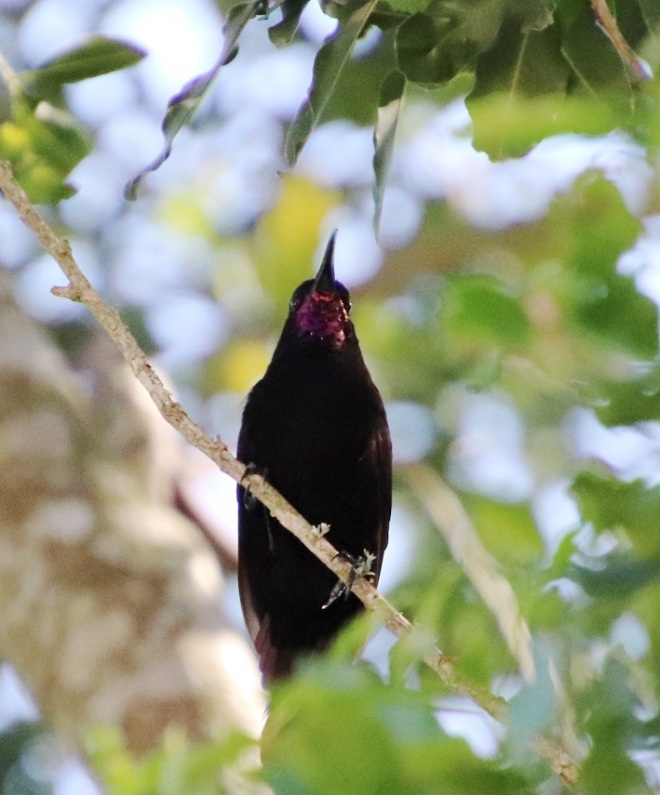 The Olive Thrush was the first to make it onto my February bird list. I have featured these lovely birds several times as they are a joy to watch in the garden. As dry as it is, they still manage to find food by turning over the fallen leaves and keeping a beady eye out for anything that moves in what is left of the lawn. They relish the apples I put out too.

February has been a busy month for me, leaving me not nearly enough time to enjoy the avian visitors to the garden. Two very welcome first-time visitors this month have been a White-starred Robin – the first time I have ever seen one in our garden – and a Brown-hooded Kingfisher. I have heard the calls of the latter for several weeks, but this month it was out in the open more than once.

The Speckled Pigeons are flourishing. This couple was eyeing the seeds on the ground below them.

It cannot be an easy time for the birds now as the plants have dried to brittleness in the scorching heat and nothing new is growing thanks to an ongoing lack of rain. I fill the bird baths several times daily and provide a supply of seeds and fruit. The Bronze Manikins eat the seeds either early in the morning or later in the afternoon, once the main rush of feeding birds has gone.

The nectar feeder has to be topped up regularly too in this hot and dry weather. Here a female Amethyst Sunbird pays it a fleeting visit.

Birds must be tougher creatures than they look, for I see and hear them daily. While this month’s list is shorter than I recorded for last month, I feel privileged to still enjoy their company.

NOTE: Click on a photograph if you wish to see a larger image.