I have written about the Black-backed Jackal (Canus mesomelus) before and am happy to mention them again because seeing them in the wild gives me great joy. They usually mate for life, so when you see one you know the other one cannot be too far away. I watched this pair trotting across the veld a little distance from each other, their heads held low, stopping to sniff at something now and then. Here they are moving close together as they inspect the ground. Note the one on the left appears to have a deep scar on its flank. 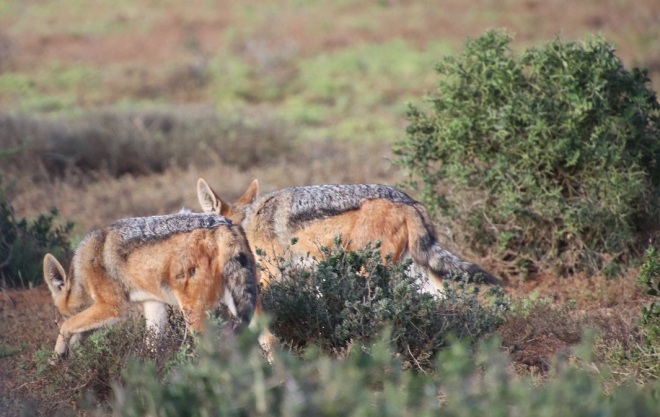 The bitch moved away from her mate in a purposeful manner to investigate the vegetation a little distance from him. 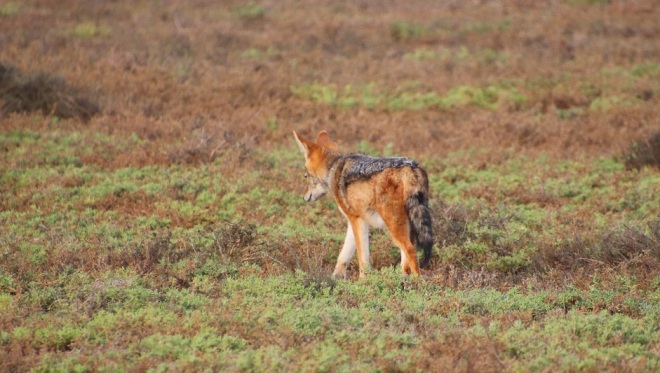 She had personal business to attend to.

Here a different pair of jackals have found some leftovers from a kill to share. 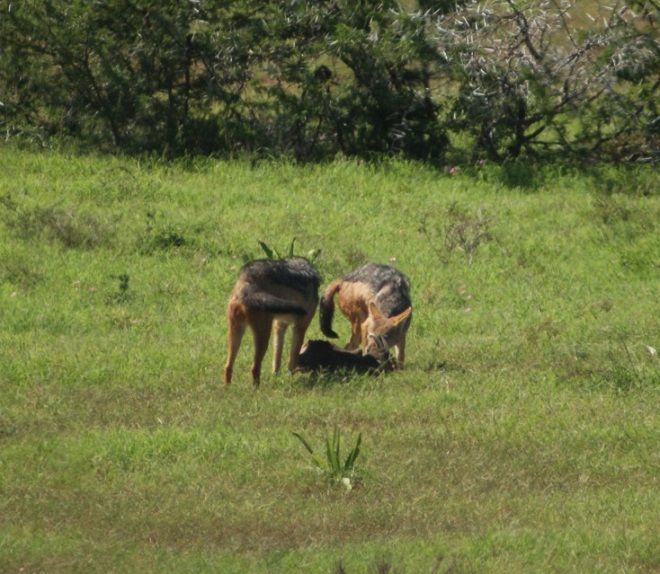 They are mainly nocturnal animals and so the best time to look out for them is early in the morning or late in the afternoons. These photographs were taken in the Addo Elephant National Park.

NOTE: Click on a photograph if you wish to see a larger view.

Farmers do not regard these wily creatures as friends, yet they are a delight to observe in their natural habitat.

Black-backed Jackals tend to mate for life and so, should you see one in the veld, you can virtually be certain there is another in the vicinity. A pair of them trotted purposefully along the edge of Ghwarrie Pan shortly after sunrise one morning. It was at Carol’s Rest though that we observed an interesting altercation between a Black-backed Jackal and a Pied Crow.

The latter had already experienced an unsuccessful attempt to share the small waterhole with an Egyptian Goose that had arrived out of the blue – with no intention of sharing the water with anyone! 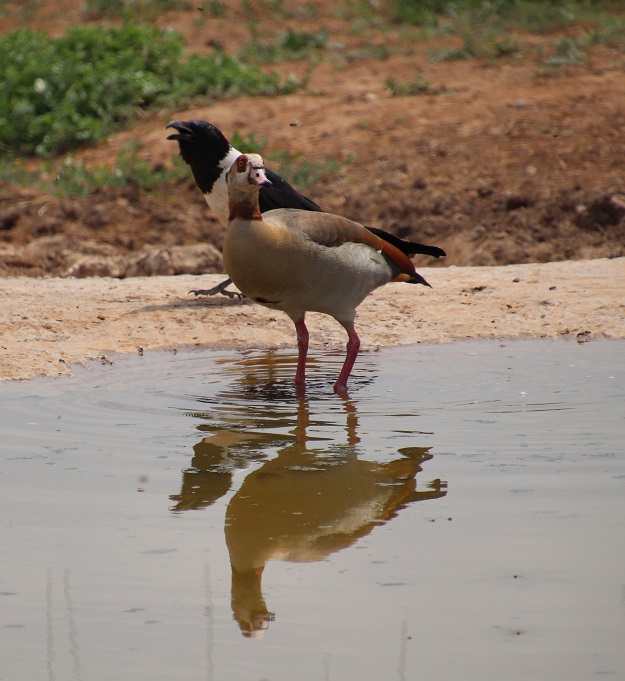 Once the Egyptian Goose had drunk its fill and flown off, the Pied Crow was in no mood to be ousted from its drinking spot again and made sure the approaching Black-backed Jackal was aware of this. Doubtless, the jackal was thirsty too and so it kept trotting purposefully towards the water. The crow opted to make a pre-emptive strike.

It continued to harass the jackal until it gave up and moved away to drink from the overflow a little further down the slope.

The Black-backed Jackal (Canus mesomelus) counts among my favourite animals to see in the wild. I have spent hours watching their social behaviour in the Kgalagadi Transfrontier Park and enjoy spotting them in the Addo Elephant and other National Parks. These omnivores have a special character about them: they look bright, alert and trot in the veld with a rather jaunty air, like this one in the Kgalagadi.

One of my favourite things when camping in the wild is to listen to the high wailing calls and yelps of the Black-backed Jackals from early in the evening through to the dawn. Sometimes you can make out the calls of one being answered by another and then another until there is a chorus of them. This, along with the call of the African Fish Eagle, is one of the iconic sounds of the South African bush. The one below was photographed in the Addo Elephant National Park.

Black-backed Jackals are often regarded as cunning, intelligent scavengers which are quick to arrive at the scene of a lion kill, for example. One can see them darting in and out to get whatever they can of the feast – all the while keeping a wary eye on the lions and hyenas! The kill featured below – in the Kruger National Park – was already a day old and the main feeders had already left it. Only an old and sickly lion was there to ineffectually defend it, with vultures, spotted hyenas and Black-backed Jackals ready to pick the carcass clean.

Based on its size, I think this is a young Jackal Buzzard (Buteo rufofuscus). However, as you can see, this particular bird was not being particularly co-operative when I stopped to check. That it was perching against a bright sky didn’t help either! Jackal Buzzards are endemic to South Africa and, as I have recorded several of them in the area over the past few months, I think it is safe to assume this one’s identity. Unfortunately, I was unable to identify the predominantly rufous chest band on this individual. 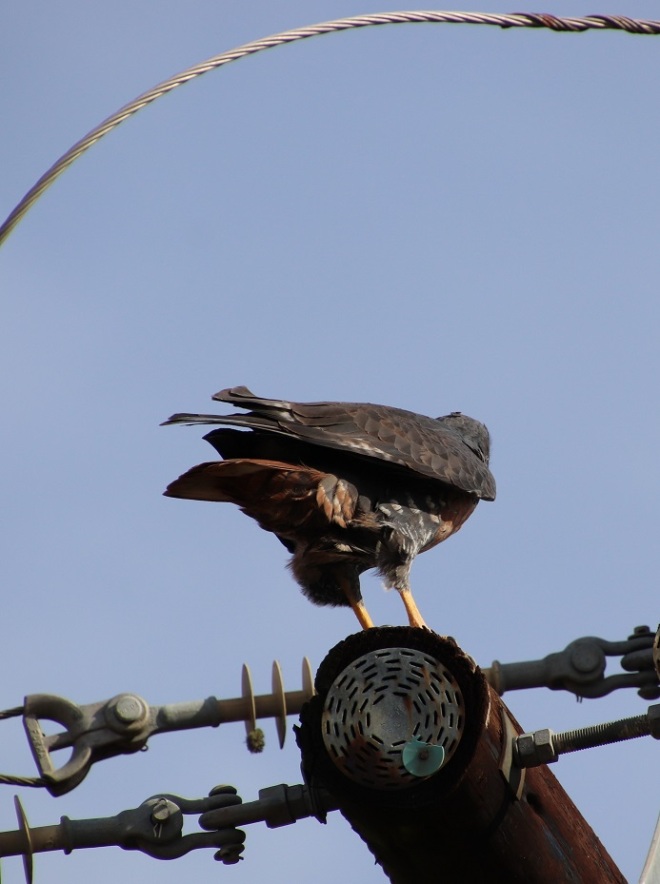 Juvenile Jackal Buzzards tend to be mostly brown in colour, with rufous on their underside and tail. This one’s tail shows the characteristic rufous colouring. 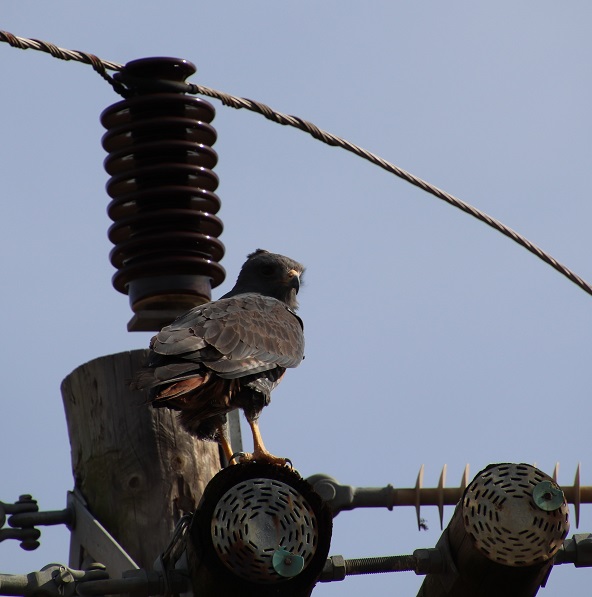 The yellow legs and feet can be clearly seen.

Readers unfamiliar with this bird may be interested to know that its name comes from the loud yelping calls it makes, which are similar in sound to those of the Black-backed Jackal, pictured below. 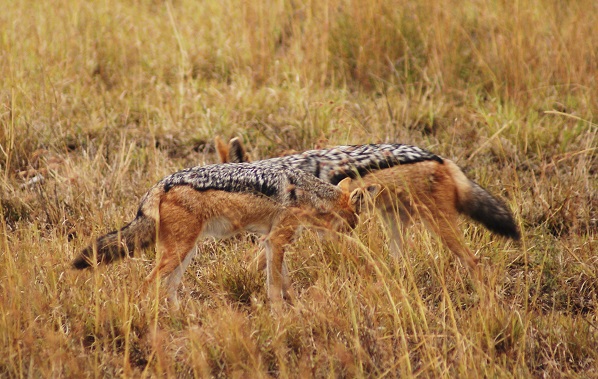 Jackal Buzzards hunt from the air and can often be seen perching on fence posts or electricity poles.

Apart from consulting several bird books, I have found these sites useful:

We decided to break with tradition this year and spent Christmas Day in the Addo Elephant National Park – as did hundreds of others! A long queue of vehicles developed outside the Matyholweni (meaning ‘in the bush’ in Xhosa) Gate at the southern entrance to the Park. Some people donned Christmas hats and there was an atmosphere of cheer as visitors in a festive mood greeted each other in passing. Jack’s Picnic Site was so chockful of people at noon that several families simply enjoyed a picnic lunch in the scant shade of their vehicles. Vehicles were parked as far back as the turnoff to the chalets when we reached the Main Rest Camp. The picnic site there too was filled to the brim with people braaiing or having a picnic in whatever shade they could find. Fortunately, we had booked for the 2 p.m. Christmas dinner at the Cattle Baron.

The weather was gloriously clear and a pleasantly warm 23°C when we arrived mid-morning. By three o’clock in the afternoon though the temperature had soared to 40°C and a strong wind had begun to whip up the dust, so thick in places that it was often difficult to see very far.

This is a good time of the year to see the Spekboom (Portulacaria afra) in bloom and we were not disappointed. The clusters of small, star-shaped, dusky pink flowers created a wonderful display from close to the ground to the trees that had somehow managed to grow tall without being eaten by elephants. 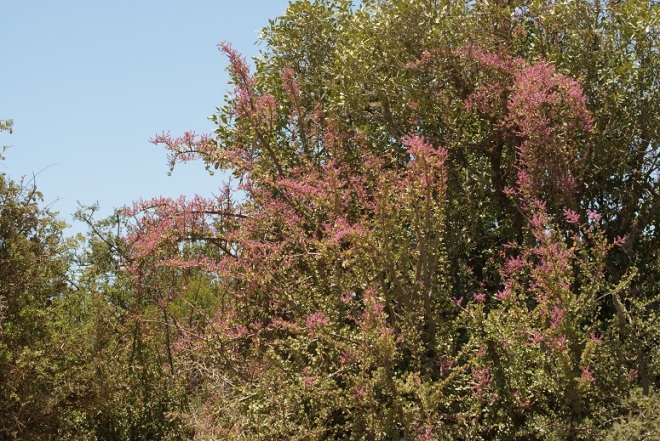 There was an abundance of the latter: we were spoiled with magnificent sightings of hundreds of elephants, mostly near the waterholes of Hapoor and at the Main Rest Camp. In the image below you can see a fraction of one herd moving away from the water. Note the paths that have been made through the bush.

Other elephants were at smaller waterholes and allowed us very close-up views of them. 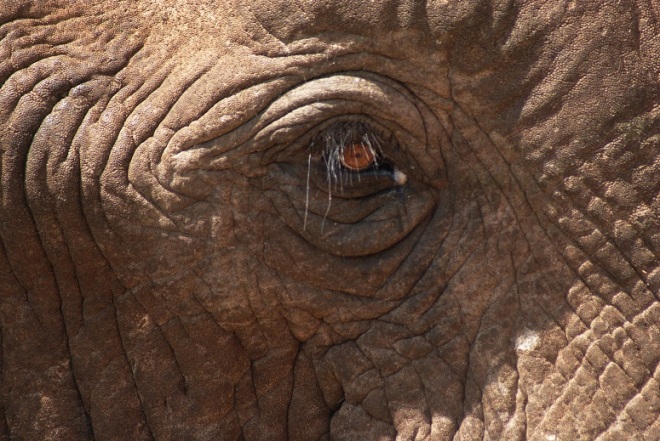 Zebras are such photogenic creatures that it is very difficult to pick out one image from the many photographs I took of them.

Given the heat and the prolonged drought, it was very sad to see this mangy black-backed jackal making its way through the dry grass. This disease is caused by mites (Sarcoptes scabiei) burrowing into the skin to complete their lifecycle. The condition may become chronic and eventually leads to the death of the animal in the wild.

On a much more cheerful note, we saw this very attractive mountain tortoise next to the road as we were heading home at the end of an interesting Christmas Day. 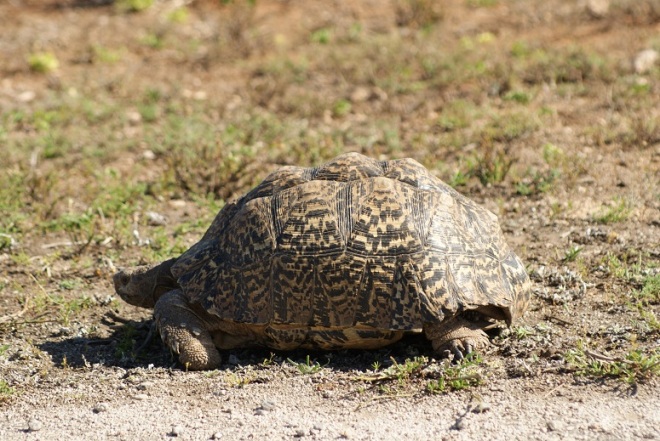