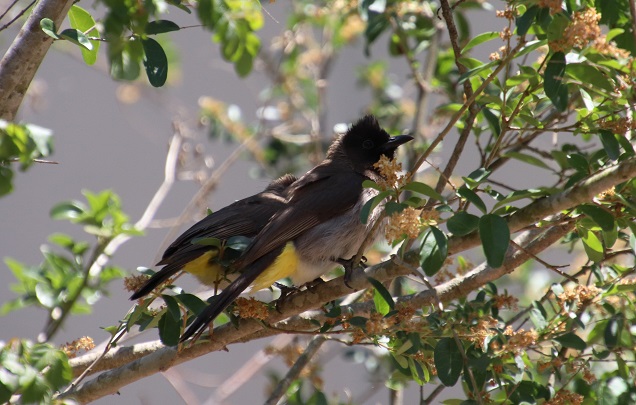 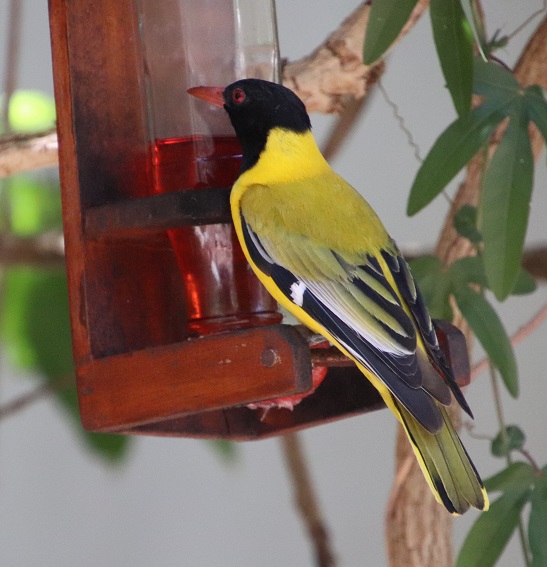 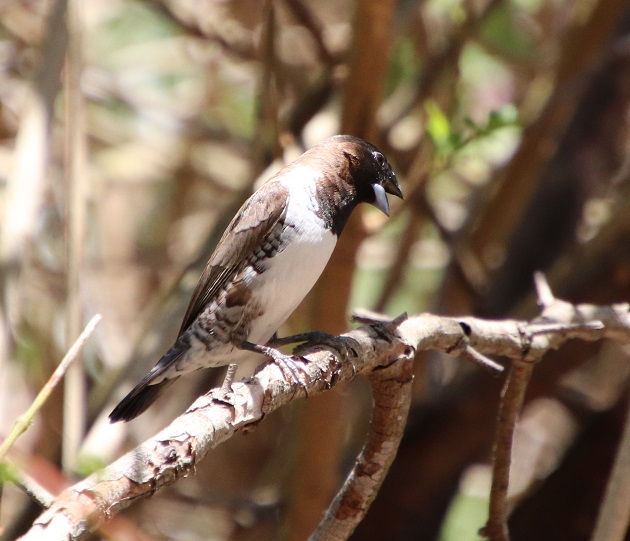 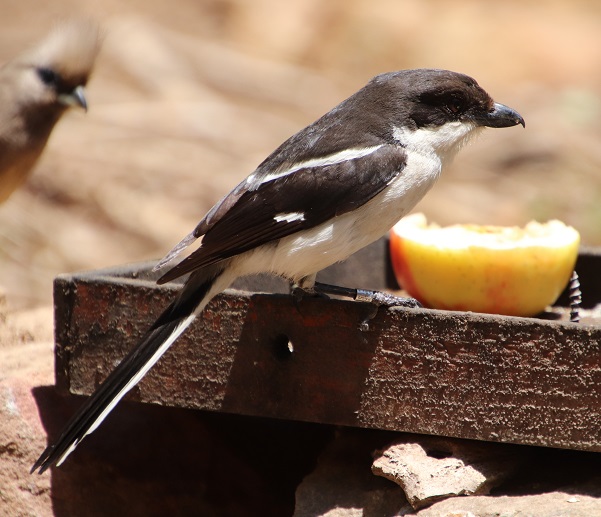 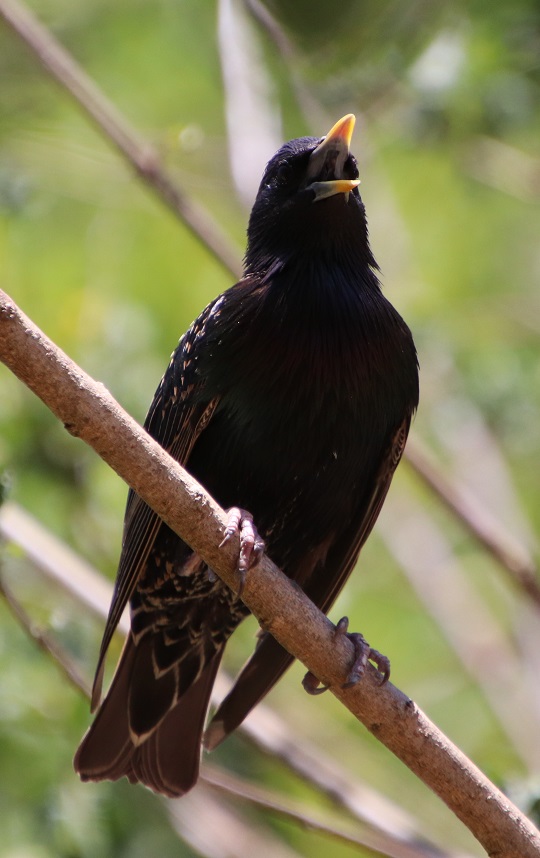 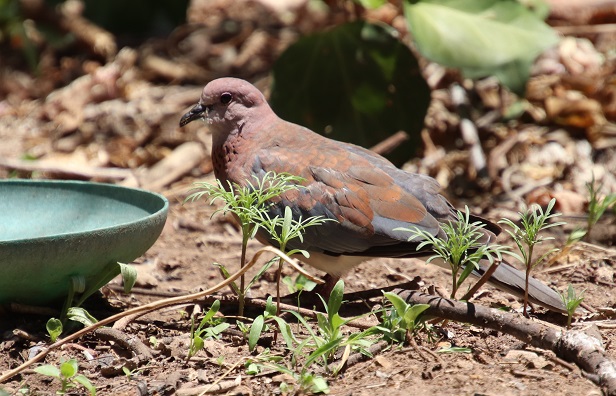 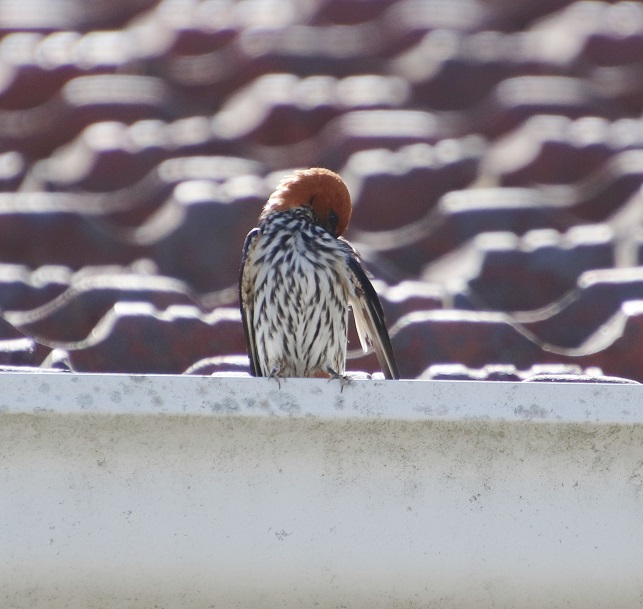 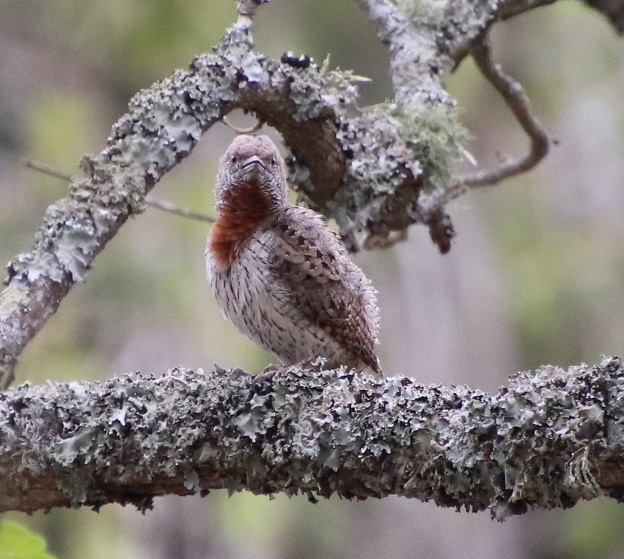 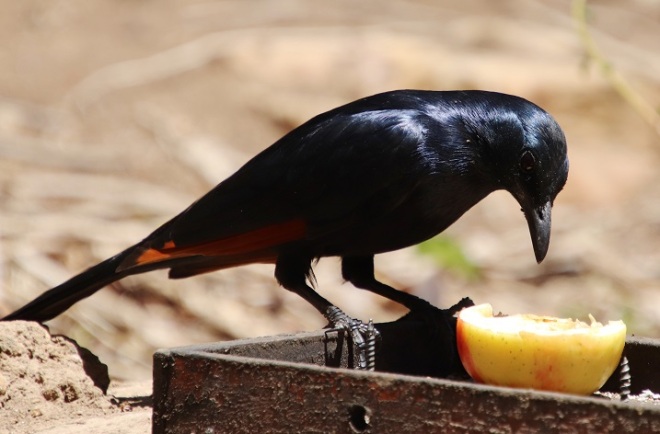 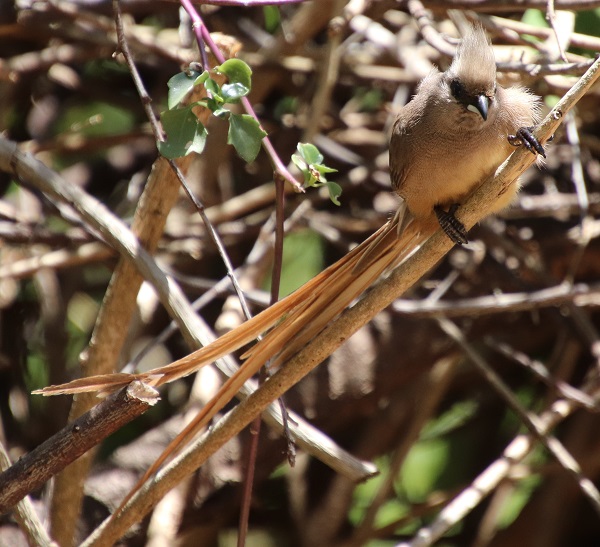 With the temperature rising towards 38°C it was not surprising to find the bird baths in our garden being well attended. During one of the quieter moments I watched a Black-eyed Bulbul first considering and then taking the plunge. 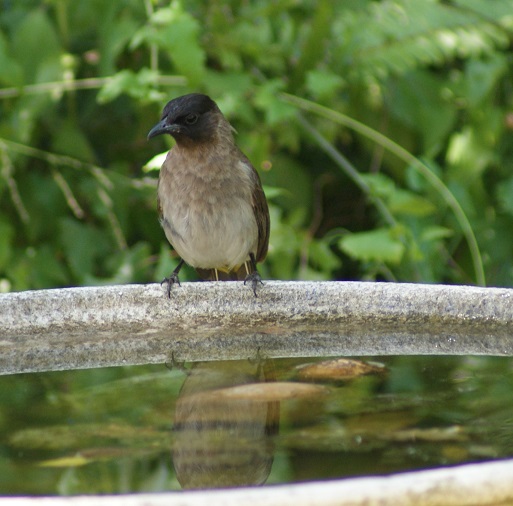 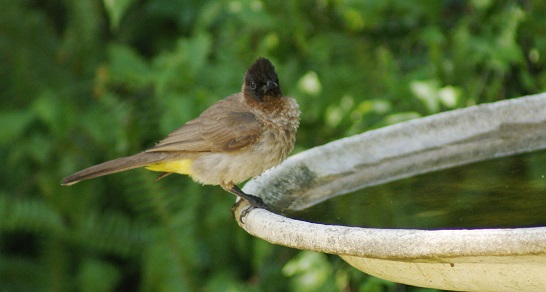 Perhaps I’ll go in on this side 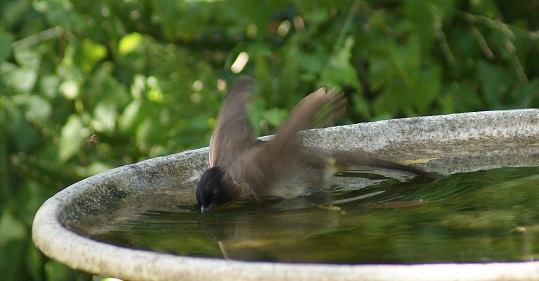 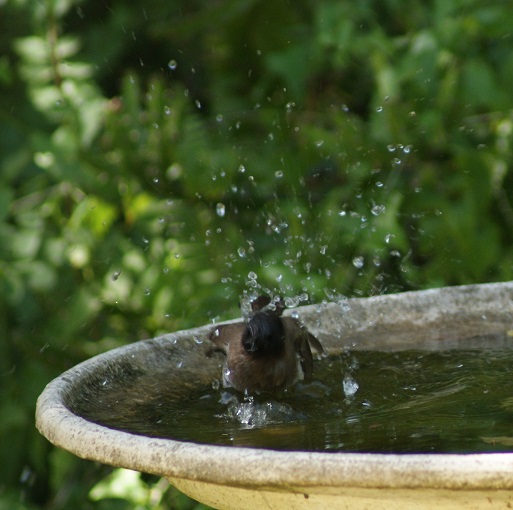 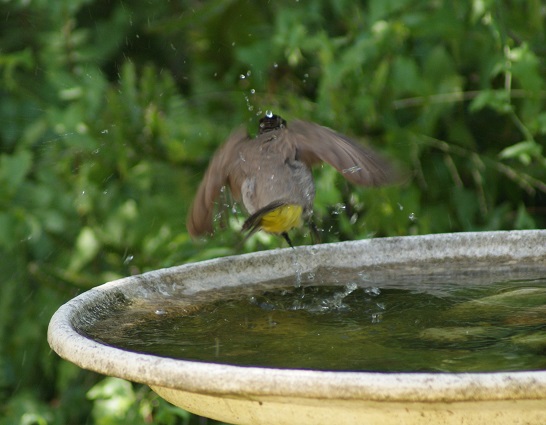 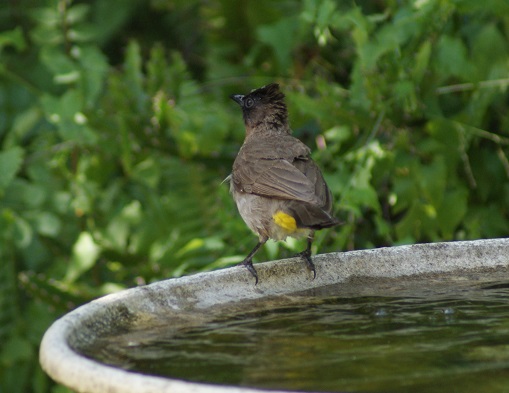 This is going to spoil my planned introduction – I know they are now known as Dark-capped Bulbuls. However, compare them with both the Red-eyed Bulbul and the Cape Bulbul and you will note the real difference is in their eyes and not the cap they wear! So, Black-eyed Bulbul it will remain.

Eyes are said to be the mirror to our souls and are known to be the source of unspoken communication. The term ‘black eye’ brings to mind fist fights, pain and abuse. Yet, seemingly black eyes are impenetrable and can be seductive. Think of Bess in The Highwayman by Alfred Noyes:

Over the cobbles he clattered and clashed in the dark inn-yard,
And he tapped with his whip on the shutters, but all was locked and barred;
He whistled a tune to the window, and who should be waiting there
But the landlord’s black-eyed daughter,
Bess, the landlord’s daughter,
Plaiting a dark red love-knot into her long black hair.

It is not surprising that black has been used as a form of eye decoration at least since the days of the Egyptians.

Now the birds: The dark face of the Black-eyed Bulbul absorbs its dark eyes and incorporates that sharp beak. Rather drab looking birds, one might say, except for the bright patch of yellow under the tail. 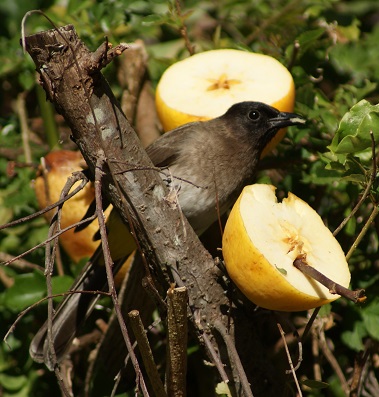 Black-eyed bulbuls are cheery, cheeky, opportunistic and loud. They are quick to investigate a new source of food and are not averse to chasing off any other bird – especially Cape White-eyes – wishing to partake of it. The Black-headed Orioles are the only ones they seem to give way for without hesitation. They are not as intimidated by the Black-collared Barbets though and simply hide behind a branch when approached at the feeding tray.

I have watched them hopping on the lawn, head cocked to one side, before homing in on an item of food. Their heads are never still; they always seem to be searching for something or on the lookout for danger. 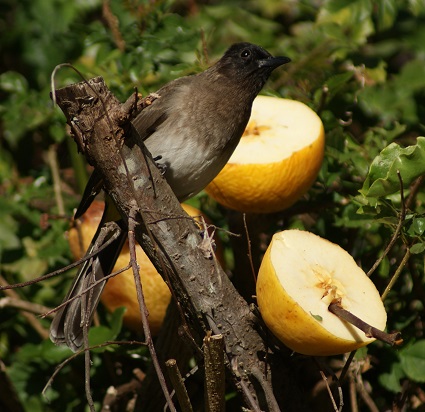 They swoop down to bear away crusts of bread to eat on a branch or greedily gobble the bread or grapes, stuffing the food into their beaks as quickly as possible, oblivious to the presence of weavers and other birds around them, so that they can search for another morsel.

They generally tuck into the juicy flesh of an apple or pear with gusto. I have seen them flitting through the bush seeking ripe cross berry fruit or picking off the aphids on the wild sage. During winter they feed on the abundant nectar of the aloes and can often be observed eating the flower petals of the Erythrina trees. They visit the fig tree too. When it is fruiting season, they tend to pick off a fig and fly away with it to consume while perched on the branch of another tree. 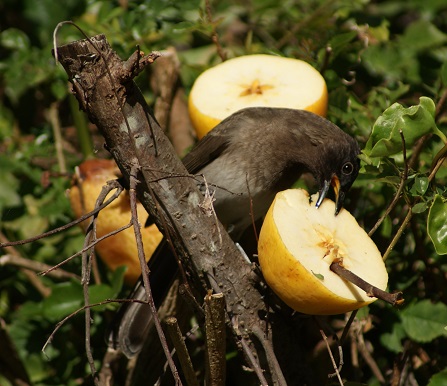 Black-eyed Bulbuls chirrup in between taking a beakful of food. They can mimic the calls of others too and have, on more than one occasion, chased other birds from the feeding tray by sounding an alarm that send the others scurrying while the Black-eyed Bulbuls settle down to feast on whatever is on offer!

There is a pair of Black-eyed Bulbuls that tend to call from the bushes and the treetops during the course of the morning before coming down to the lawn in the late afternoon to forage what other birds might have left: bread crumbs, seeds, or bits of fruit. After eating, they meticulously wipe their beaks on the thin dry stems of the Leonatis leonuris or on the lichen-covered branches of a nearby Pompon tree.

In the past I have observed a pair of bulbuls taking turns to stuff their beaks with apple and flying straight to their nest to feed their chicks. Later, the young bulbuls are drawn to the source of the food where they spread and flutter their wings while opening their gaping mouths and making appealing twitters as the adults feed them as quickly as they can.

I enjoy watching them preening themselves by stretching out each wing in turn to be ‘nibbled’ at. This activity is generally followed by a splash in the bird bath.