Jack’s picnic site in the heart of the Addo Elephant National Park is a good place to stop for lunch and enjoy a break from driving. Each picnic site is separated from the next by a thick hedge of Spekboom and other indigenous plants, so one does not have to wait long to get close-up views of a variety of shrub-loving birds. We were able to admire a Bar-throated Apalis – a bird heard all over the park, but which is not easily seen whilst one is driving. 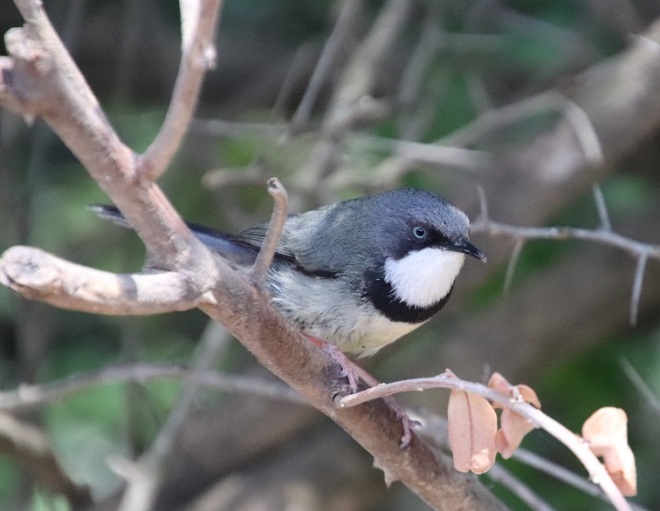 It wasn’t long before a Southern Boubou made an appearance.

A pair of Cape Robin-chats came to investigate the pickings. 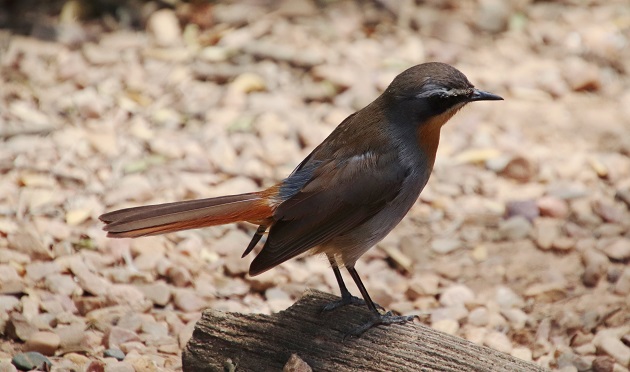 We are always pleased to see a Sombre Greenbul (I still think of it is a Bulbul!), which is another bird more easily heard than seen when one drives through the park.

These birds have become accustomed to the regular arrival and departure of humans, for they appeared in quick succession to comb the gravel for anything edible the previous party might have left in their wake. Within minutes of our arrival they had retreated to the dense cover of the surrounding shrubbery as we settled down to enjoy our food and conversation.

Shortly afterwards I became aware of the Cape Robin-chats calling loudly behind me – I recognised the alarm call from the many times I have heard it in our garden. One of the pair spread its tail feathers out widely, while the other ruffled its feathers as if to increase its size. 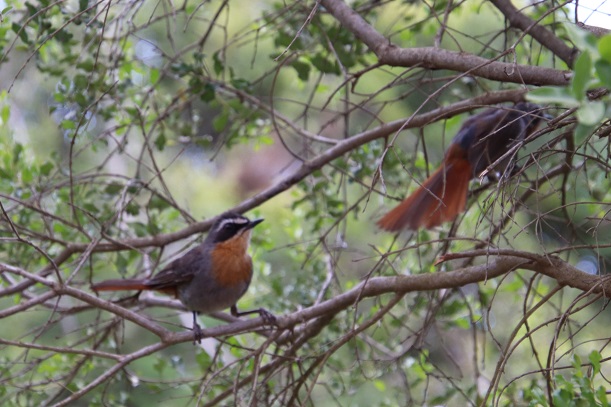 The Southern Boubou emerged from the undergrowth, making a harsh grating alarm call, while the Bar-throated Apalis danced frantically along the top of the Spekboom hedge, snapping its bill and wings – it too was clearly agitated. Something untoward was happening.

I looked up in time to see a Boomslang launching itself from the shrubbery onto the roof shading our picnic table – far too fast for me to focus my camera! We could see no sign of it on the roof, so we continued our picnic until I looked up again and saw its sinuous length squeezed into the space between the roof and the wooden slats below it.

Some of our party felt it was too close for comfort

We decided then than it was time to pack up and continue our game viewing drive. 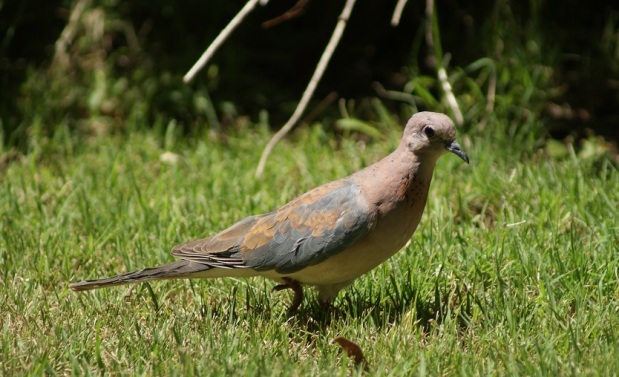 I was comfortable sitting in the shade of the forested part of the garden. The Cape– and Village Weavers were pecking away at the seed I had scattered earlier and would, now and then, latch onto a large (for them) piece of bread and fly up to a nearby branch to consume it at leisure.

My pot of Earl Grey tea was nearing its end when I turned my attention to the Forktailed Drongo up to its usual antics of stealing titbits from the beaks of other birds. It was good to hear the Sombre Bulbuls calling nearby; the Laughing Doves were combing the lawn for seeds and I idly watched Bryan the tortoise amble along, munching as he went. It was an idyllic scene.

The unusually persistent calls of the Cape Robin had barely registered in my languid state until the calls seemed to become louder and more agitated. I realised they came from the thick foliage near the pool, but was too comfortable to investigate – until I noticed the weavers, the Olive Thrush and the Forktailed Drongos swiftly fly towards the sound.

As I approached the pool, I noticed a flurry of feathers as the afore-mentioned birds flew in an out of the leaf cover, all flapping their wings and making a loud noise. I looked up at the leaf canopy from underneath in time to see a large Boomslang winding itself sinuously through the branches. As it looped across towards another tree, the slack, thick cable of its body was repeatedly attacked by robins, weavers, a Black-collared Barbet and even a Speckled Mousebird.

The snake moved swiftly and gracefully, winding in and out of the branches with ease towards a shallow nest balancing precariously in a fork of cotoneaster branches. Neither the mobbing of the birds nor the cacophony of their protests seemed of concern.

I turned away to call P to witness what was happening. My attention was diverted for seconds only … the Boomslang disappeared! As you can imagine, I checked the draping stems of canary creeper very carefully before moving an inch. The agitated birds began to disperse and soon all was quiet. The soporific air of a hot afternoon reasserted itself.

Cape White-eyes resumed their search for insects, the weavers returned to the seed tray, the Laughing Doves tramped across the lawn, and the Cape Robin – which had alerted me to this drama – flew off towards the direction of the fig tree.