While still on the subject of flowers, I want to draw attention again to the blaze of orange trumpet-like flowers that brighten the garden and the veld from the end of summer into spring, with autumn being the best time for flowers, which look particularly beautiful when highlighted by the bright sunshine.

Commonly known as the Cape Honeysuckle, Tecoma capensis is drought-resistant and – certainly in my area – enjoys rampant growth periods. So rampant in fact that I have to be vigilant about cutting it back or it would take over whole sections of our garden. In some gardens it has been trimmed to form dense hedges. Alas, I lack the ability to do that and so it grows ‘free-form’ in my garden – trimmed roughly to keep it in check – where it forms a screen from neighbours, from the road below, and provides ample nectar for birds and insects. One has to keep an eye on it though for over the years it forms a hard woody stem that is difficult to cut. 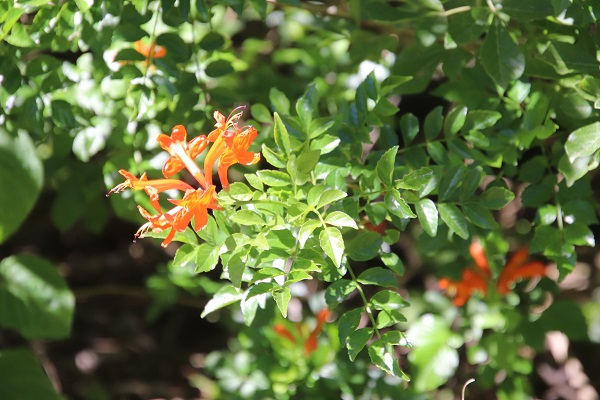 Tecoma capensis is indigenous to South Africa. It occurs naturally in Limpopo, Mpumalanga, KwaZulu-Natal and the Eastern Cape.

I have mentioned before that weavers are notorious for biting off the tubular blossoms of the Cape Honeysuckle to get to the nectar. This time I have caught them in the act:

The one in the centre of the picture has firmly grasped the base of the flower and is about to pull it asunder. The female below is doing the same.

The flower tube is pulled from its base and then squeezed to release its nectar:

When a flock of weavers go to work like this, they do not leave much for the sunbirds, or bees or even the ants. 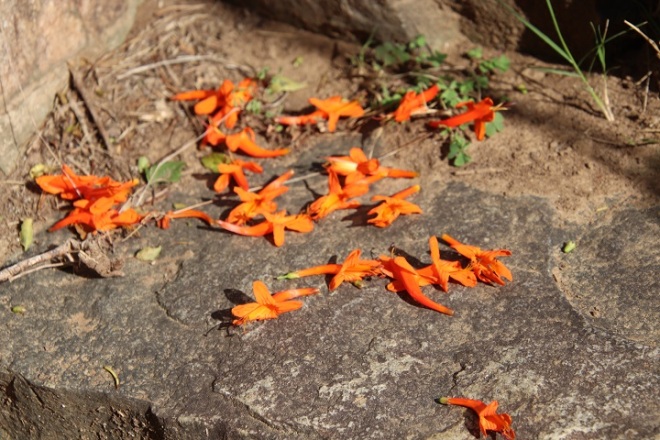 The warmth of orange helps to keep the chill at bay and so I present to you some orange-themed photographs. The first is a bright morning sky as seen from my bedroom window:

Next come three flowers. The first is one of many more aloes likely to be shown here as the flowering season gets underway:

Deep orange Cape honeysuckle flowers are out already, brightening up gardens, hedges and the open veld:

The golden shower creepers are also showing buds and will soon provide cascades of orange too:

The colouring of the eyes of the Red-billed Oxpecker fits into this theme – just:

The veld has been tinder dry for weeks as the relentless drought continues. A grass fire, fanned by hot wind, raced through the mountains around our town at the weekend, engulfing us in a blanket of smoke and ash. Today the Mountain Drive area looks bleak and black. Yet, Earth Day is one that encourages us to look at our environment more closely; to get to know it better; to consider what we can do to protect and nurture it better; as well as being thankful for what we have.

How extremely thankful I am for the 4mm of soft rain that we were blessed with during the night! 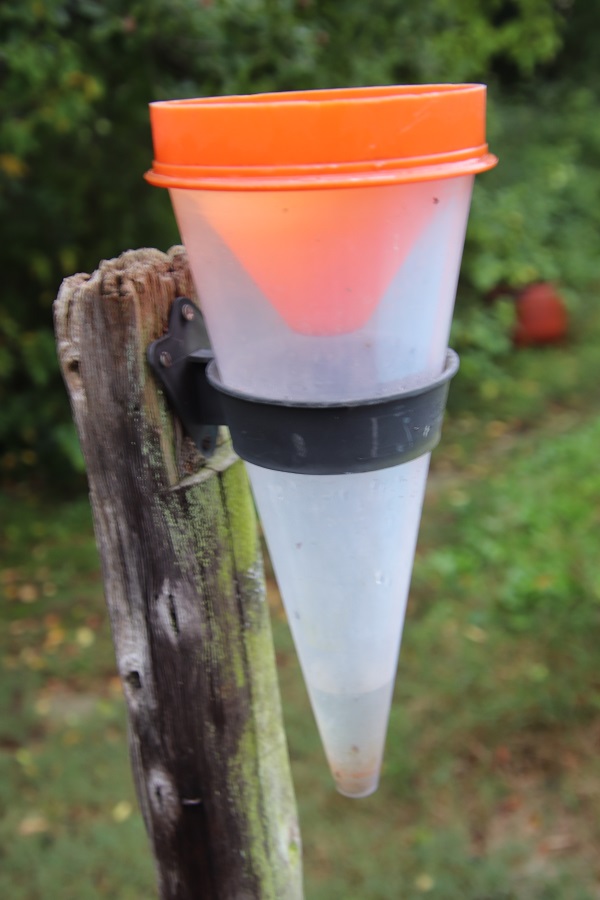 This has encouraged the canary creeper buds to open – these are the first of what should become a waterfall of bright blooms. 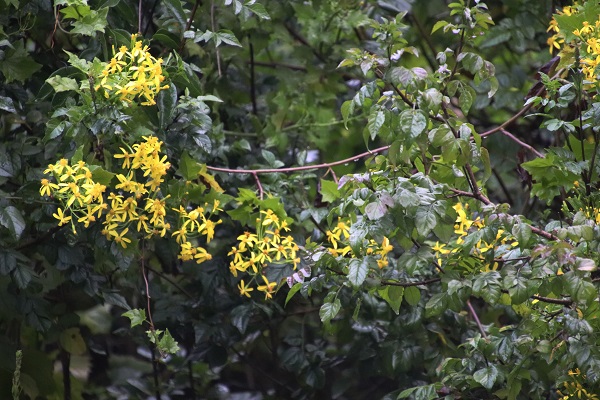 The Crassula ovata is also covered with buds waiting to open. 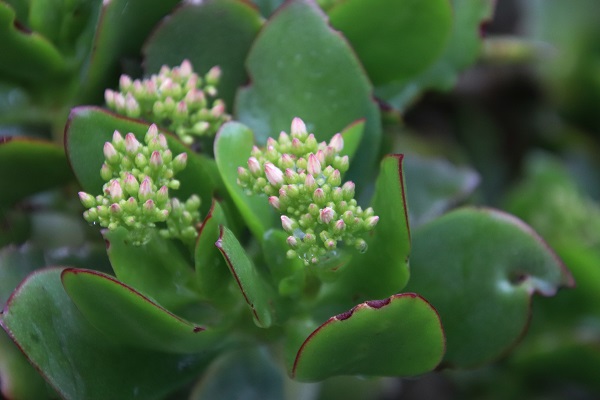 Meanwhile, the Cape honeysuckle flowers are already providing swathes of bright colour and a useful source of nectar. 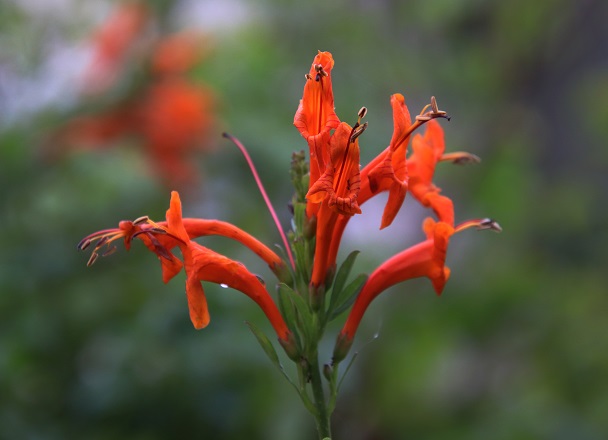 The Virginia creeper is showing off its autumn colours.

In keeping with these autumnal colours, it is fortuitous that an Olive Thrush was the first bird to greet me this morning. 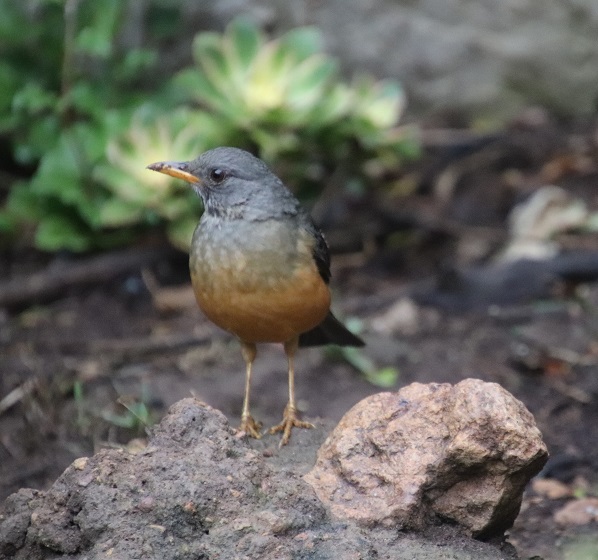 This has been the month for subtle seasonal changes. Whatever the calendar might suggest, nature knows what to do when. So it is that the Pin-tailed Whydah has lost his long tail feathers and the tweed of his winter coat is beginning to shine through his worn out tuxedo; the Cape Weavers no longer carry a deep blush; and the weavers in general are all looking a little tatty. Although the Lesser-striped Swallows departed for northern climes earlier in the month, a few White-rumped Swifts continue to fly low over the garden or can be seen twisting and turning high in the sky against the late afternoon light. Thankfully, the Hadeda Ibises are waking later now that the early mornings remain darker for longer!

A pair of Southern Boubous have become regular visitors to the feeder, usually only one at a time, and I hear them calling to each other during the day. The beautiful orange Cape Honeysuckle is coming into bloom and already the Southern Masked Weavers are biting the tubular flowers off at the base to get at the nectar.

Now that the Common Fiscals are no longer feeding their fledglings I see them less often. The tame one we call Meneer still alights on the garden table now and then to collect its personal handout. Speckled Pigeons seem to breed throughout the year. There are now a lot of them living in our roof!

These two Laughing Doves seem to have run out of things to say to each other.

A Cardinal Woodpecker announced its presence nearby recently with a typical rat-a-tat sound as it tapped at old wood for insects. It took me a little while to spot it through a tangle of shrubbery, where it was hammering away at the trunk of a long dead plum tree.

Green Woodhoopoes pay fleeting visits to the garden to probe old wood, between dry aloe leaves, and cracks for food. This one is a youngster, still lacking the bright beak and the patterns on its tail. It was exploring a tree in the company of several adults.