Do you remember the story of The Emperor’s new clothes? That is the one about the king who was overly fond of fashionable clothing, which took precedence over even the affairs of state. So self-absorbed was he by the new clothes he could show off at every opportunity that he was easily swindled by a pair of weavers who promised they could weave him clothes of the finest cloth – that would be invisible to anyone who was either incompetent or stupid.
Would anyone admit they were incompetent or stupid? Thus it was that everyone involved in the checking process assured the king that all was well, even though they could see nothing on the loom. Well, of course they couldn’t see anything – there was nothing there! In this way the weavers stashed away piles of gold, silk and pots of money whilst pretending to be hard at work.

The silly king believed everyone who assured him of the great beauty of the new cloth and resolved to wear his new outfit at the next important procession. Could he see the beauty of the clothes as he held his arms out to be dressed? No, but then he would not admit this failure on his part in front of everyone else who seemed to be overwhelmed by the beauty of his new garments for that would be tantamount to admitting that he was both incompetent and stupid!

Today I met some hard-working emperors of a different breed: outwardly they give the impression of beings not to be messed with. Sleekly black and covered with rows of bright red spots and, even more menacingly, rows of white spikes that stand out in contrast to their black bodies, these imperial creatures appear to be armoured and ready to withstand the onslaught of anything coming close enough to even sniff at them.

Closer observation shows what looks like a large bright all-seeing eye, only it clearly isn’t the real eye that adds to the frightening appearance along with the suckered feet and sharp mandibles. If my hearing was more acute I would probably shiver in fear at the constant crunch, crunch, crunch, as they collectively chomped their way through leaf after leaf of the cabbage tree (Cussonia spicata).

That might give you a clue as to what these frightening looking emperors might be … Cabbage Tree Emperor Moth caterpillars, which will emerge in due course into the large, rather beautiful looking Common Emperor Moths (Bunaea alcinoe). These caterpillars can defoliate a cabbage tree within a week or two. The ones I saw today were making short work of the attractive green leaves as I watched them. Fortunately, the trees will recover and, hopefully, when the time is right, we will be able to see these emperors donning their new clothes and form. 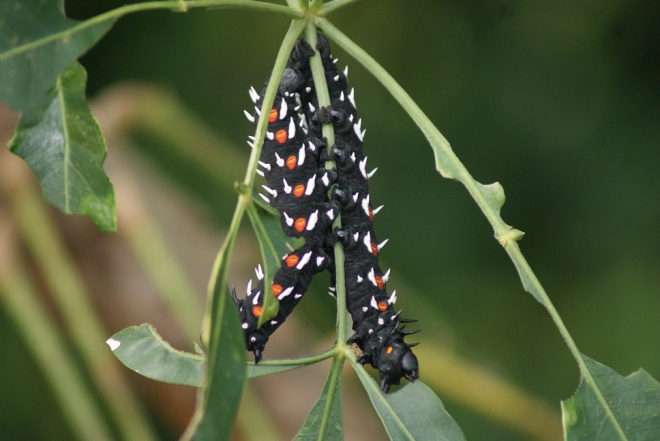