A water bird I enjoy seeing from time to time is the African Spoonbill (Platalea alba). This one was feeding with its characteristic side-to-side motion in the shallow water at the edge of the Domkrag waterhole in the Addo Elephant National Park. 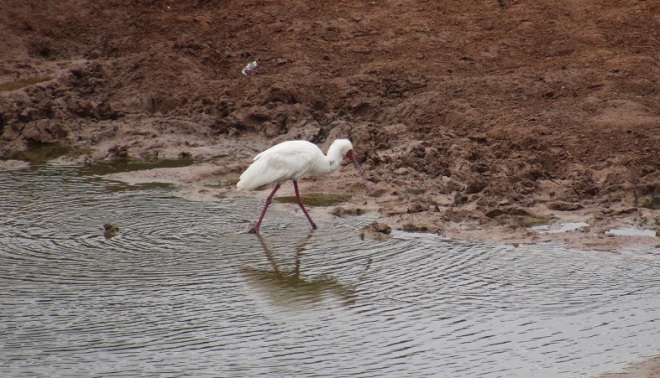 As you can see, it is a predominantly white bird with characteristically red legs, face and bill. Their spoon-shaped bill helps them to find fish, insects, larvae, and molluscs by acting as a hook to catch its food.

There is no doubt that zebra are photogenic – I have a great number of photographs of them – for they are strikingly beautiful animals. I am particularly fascinated by the patterns on their faces as one can tell from these that, even though they might ‘all look the same’, there are indeed unique features about them. Zebra are often described as having patterns similar to our fingerprints; that no two zebra are exactly alike. I commented on a blog the other day that apparently the stripes on either side of a zebra are different. This is an observation I have read about but, as we usually only see one side of a zebra at a time, it is difficult to verify. Hunting through my collection, I came across a photograph of this zebra drinking at the Domkrag waterhole in the Addo Elephant National Park – an opportunity to see one from above. 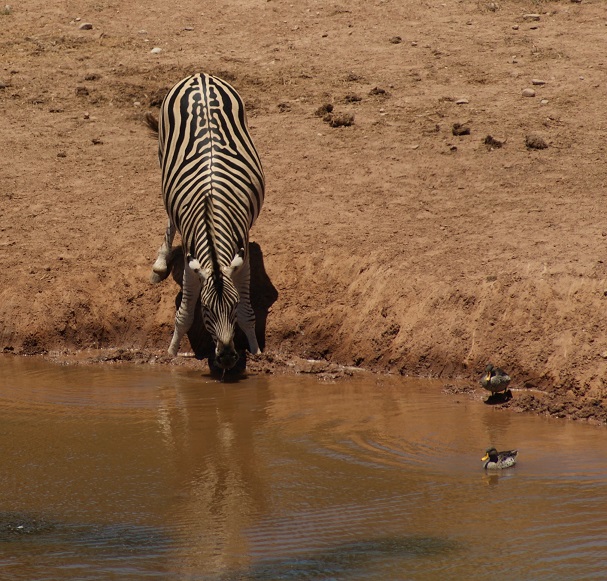 The more I look at these two photographs, the more I appreciate how similar the stripe pattern is on both sides – until you actually follow the pattern closely. We seldom get the opportunity to do just that when we see zebra in the wild. 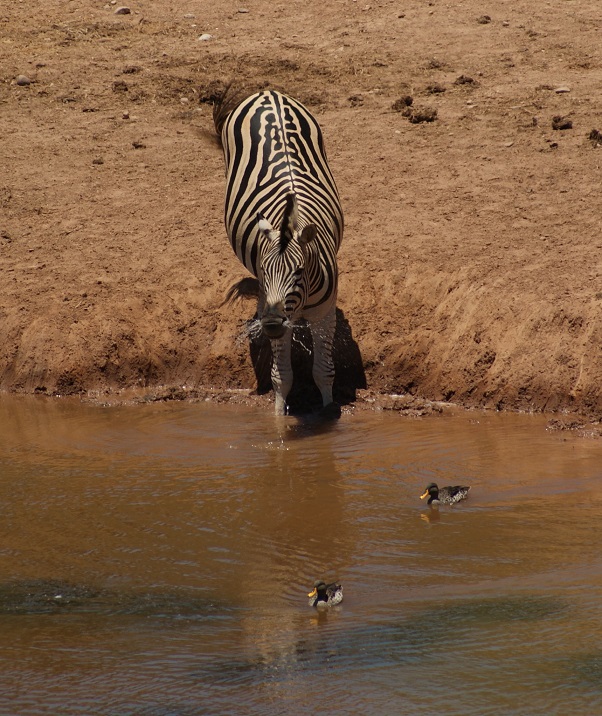 Zebras are distinctive. Their stripe patterns are an indication of just how distinctive they are – each one slightly different from the other.

The Red Hartebeest (Alcelaphus buselaphus) has been featured twice before in this blog. This is not surprising for these plains animals with a conspicuously white rump are always a pleasure to see – especially when their reddish-brown coats shine in the sun. 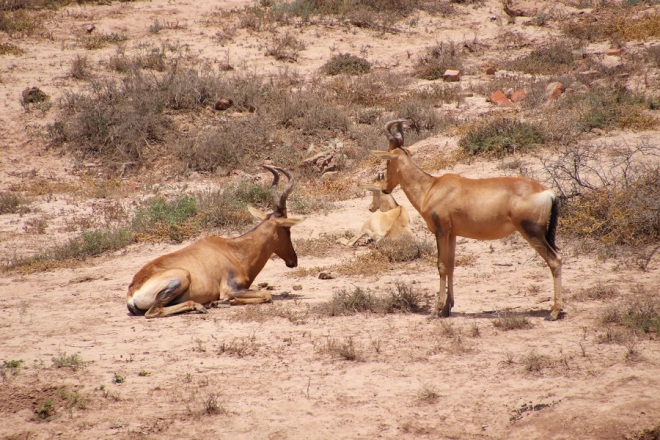 These two adults are standing close to a youngster in the Addo Elephant National Park. Note the different colour of the young one as well as its short spiky horns. Here is a closer view of a different lanky youngster. 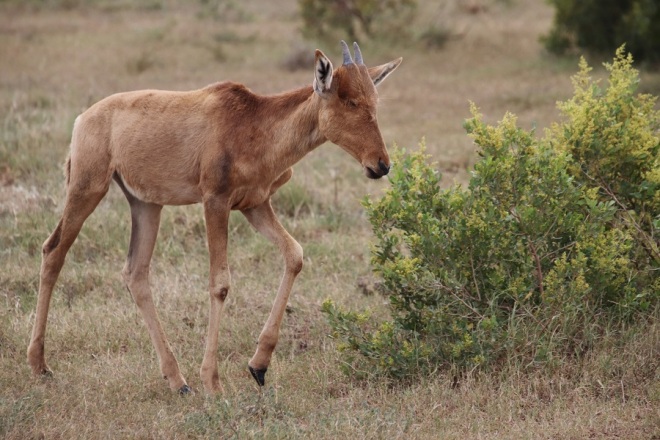 A little further on, an adult picks its way over the dry stony ground towards the water at the Domkrag dam. 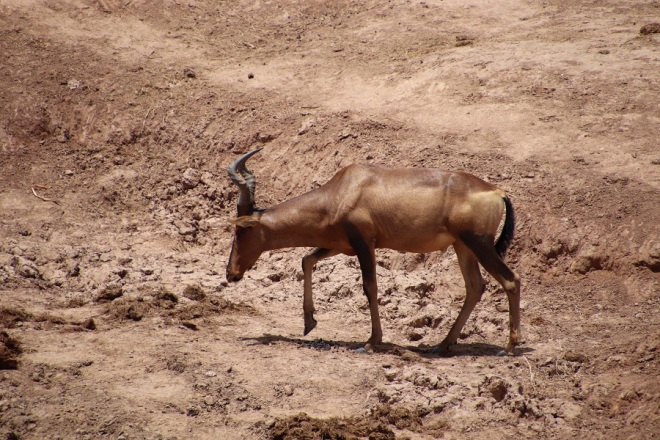 There are antelope droppings near its front feet and elephant droppings on the ground ahead of it. They are frequently seen alongside zebra in the plains. 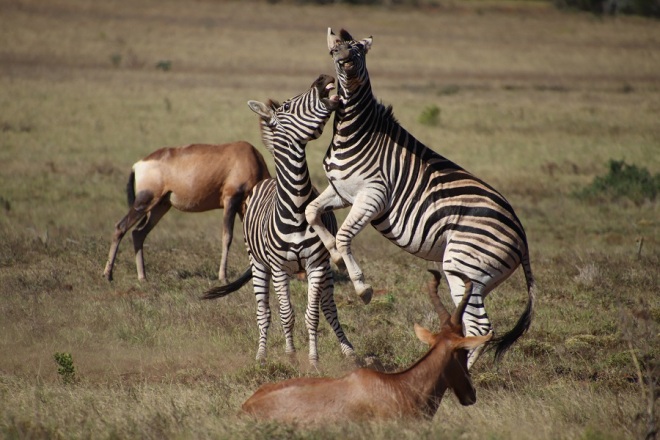 These two appear to be unperturbed by the fighting zebras in their midst. The length and narrow width of the muzzle of the Red Hartebeest make it a selective feeder. Being non-ruminants, zebras are bulk grazers and have wider muzzles that help them to be more tolerant of the available grazing. 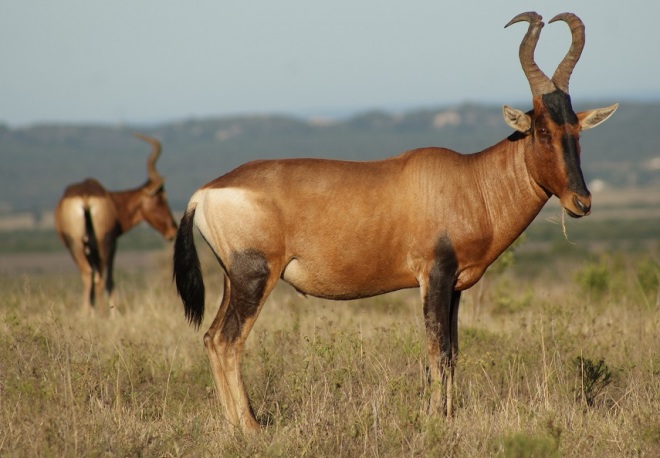 Easter is a reflective time of the year and so I offer the following reflections that have all been photographed in the Addo Elephant National Park: 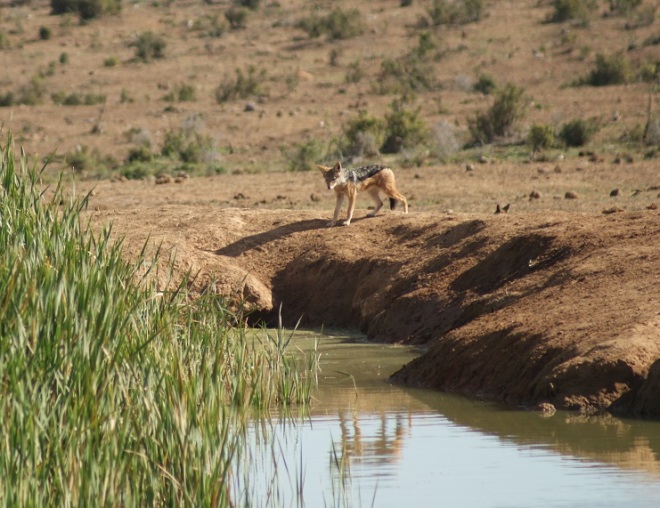 This Blackbacked Jackal was approaching the water at Hapoor in a very contemplative mood – it stood there very quietly for some time, possibly aware of the many elephants splashing just the other side of the reeds – before it made its way down the the water in a slow and cautious manner. It displayed patience such as few of us have when we are thirsty. 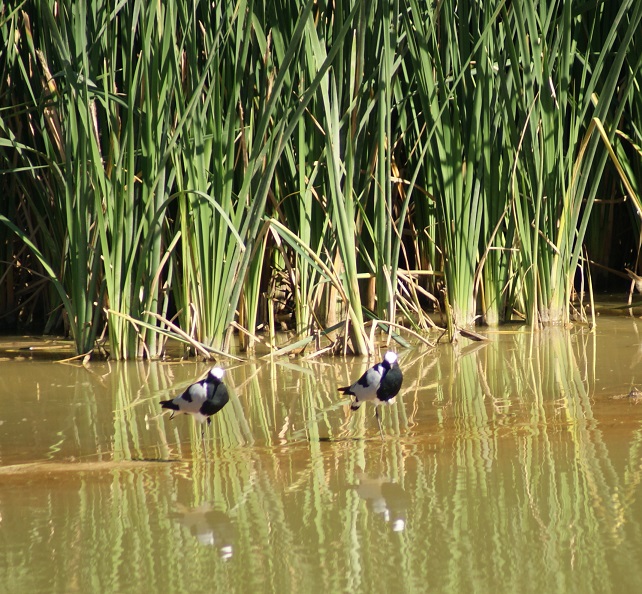 These Blacksmith Plovers (now called Blacksmith Lapwing) are standing on a barely submerged sandbank in front of the reeds at Hapoor – doubtless enjoying a respite from all the elephant activity that this waterhole is well known for. 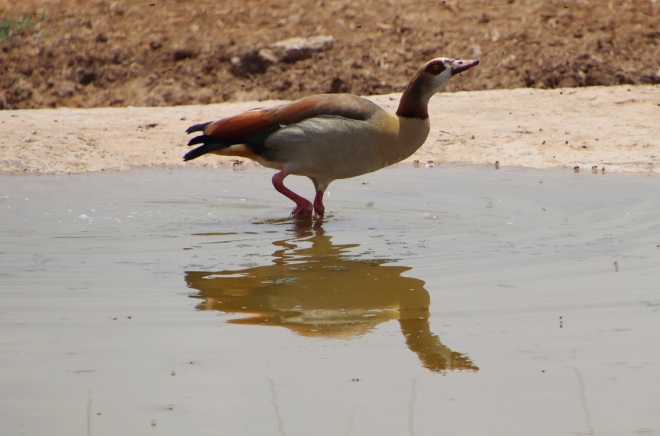 An Egyptian Goose enjoying a drink at the Carol’s Rest waterhole. 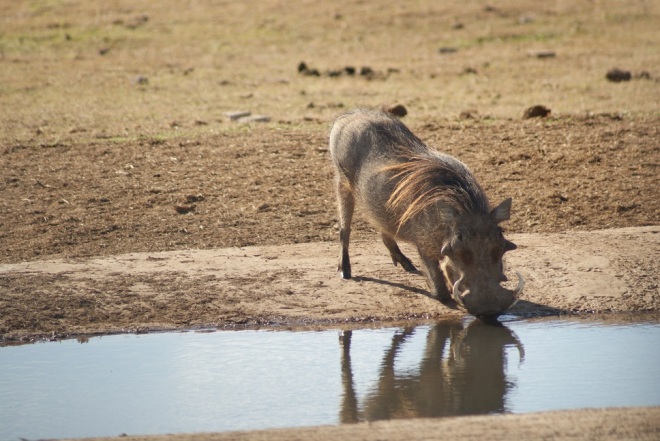 Another thirsty visitor at Carol’s Rest is this warthog. 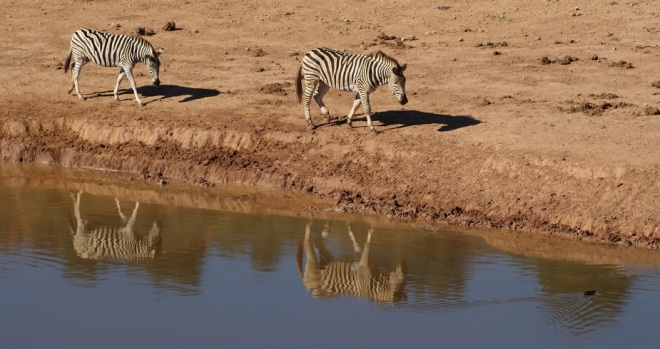 I will leave you with these zebra walking along the edge of the Domkrag waterhole in search of a suitable drinking place.

NOTE: Please click on a photograph if you wish to see a larger image.

Despite its name, one cannot be guaranteed to see a lot of elephants – or even any elephants – whilst driving around the Addo Elephant National Park. Sometimes one feels fortunate to see a lone elephant, such as this one, wading through the shallow water in the Ghwarrie Dam or drinking quietly with only water birds for company at first. 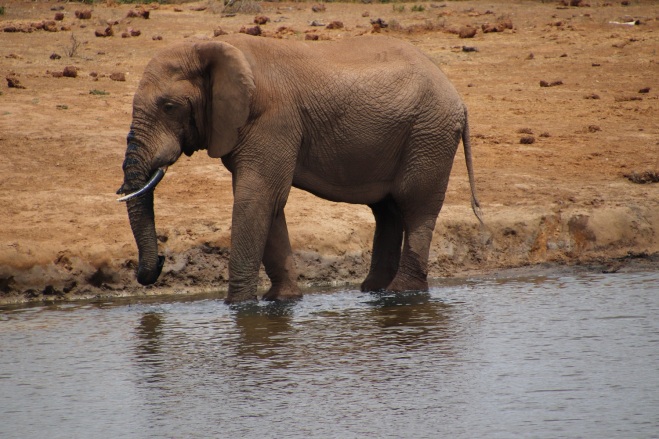 Note the thick, dark mud sticking to its tusk. It was later joined by a lone Cape buffalo that wasted no time in wallowing in the mud.

The situation at Rooidam was different, for here a small herd had gathered, waiting patiently while a young one found a deeper hole in which to wallow. It sometimes submerged itself so completely that only the tip of its trunk showed above the water. You can see, from the elephant on the right, how shallow the water is for some distance from the edge. 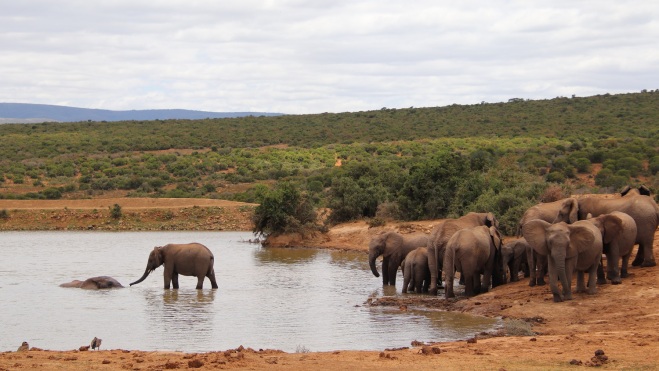 You will notice that most of the other elephants have already covered themselves with mud or sand, which helps to protect their skin from the harsh rays of the sun (as we would use sunscreen) as well as from parasites.

At Domkrag another elephant cut a lone figure as it drank thirstily from the dam. You can tell from the shadow beneath that the sun was high. A strong hot breeze was blowing too which added to the discomfort of the thirty plus degrees heat. 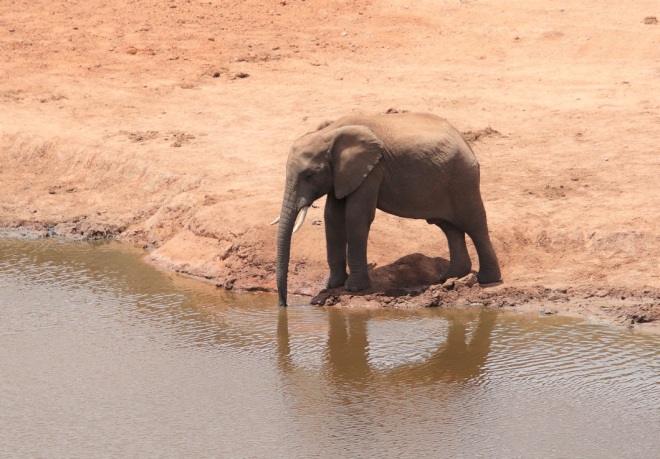 No single photograph can capture the hundreds of elephants gathered at the popular Hapoor waterhole. Far too many vehicles were parked cheek-by-jowl along the edge of the main watering place for another to get in, so these two photographs show a small section of the hundreds of elephants gathered on the other side of that waterhole where, presumably, there must also be access to watering points. 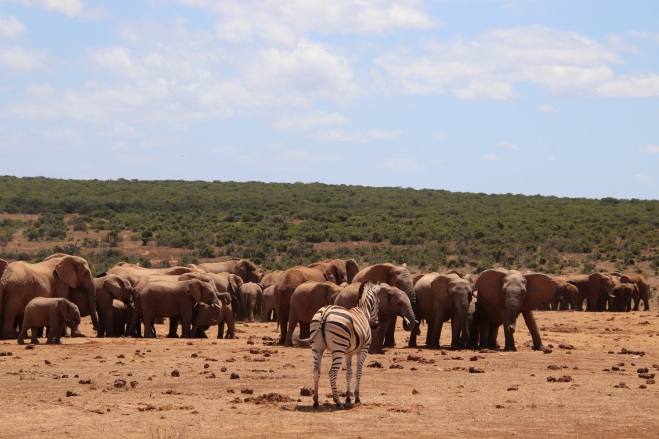 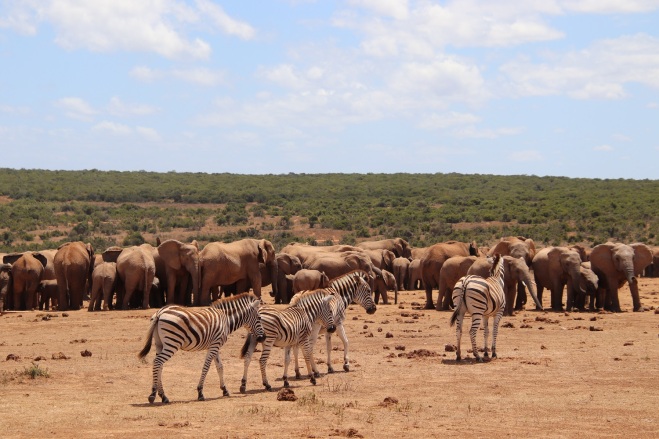 Note: you can double-click on these images for a larger view.