For the past few years the catchment dams around our town have dried up completely during the drought, leaving the town heavily dependent on water piped in from the Orange River via the Fish River. In June last year Milner Dam looked like this:

It has taken months after rain in March  – none of it heavy downpours, but all within the catchment area – for enough water to finally seep through the surrounding countryside so that it could begin filling the dam. This view of it was taken in March:

I felt such a thrill of excitement at seeing the sky reflected off the water! The water level is still very shallow and the dam is still very far from being operational once more. There is less water in it now, two months later, and even less chance of any further rain coming as winter is peeping around the corner. I am hoping though that the dam won’t dry up completely and that more water will come through along with the summer.

I sometimes look at photographs from bloggers in other parts of the world and marvel at the bright colours and beautiful greenery – which I haven’t been able to reciprocate with even during our summers. So, here are some glimpses of green in this drought-stricken part of the country. First up are the freesia buds growing in a pot so that they could be nurtured:

The flowers are over now, but for a few weeks I could enjoy their pretty white blossoms as well as a few pink ones. One of the hardiest plants I have is this asparagus fern growing next to our front steps. It appears to need very little in the way of water.

We live on the side of a hill overlooking our town. This is a view half way up.

A little further afield is this view of the Rietberg on the opposite side from the view we get of these hills from town. 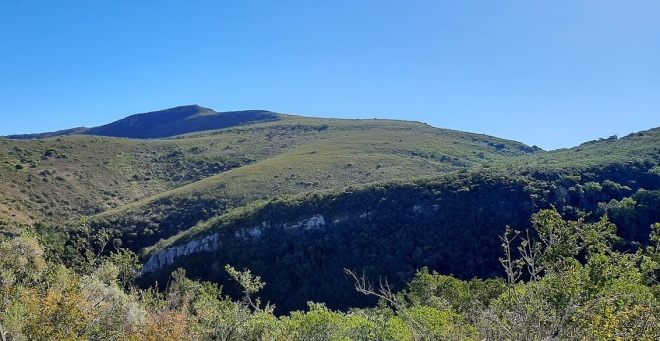 And lastly, a view of the Lothian area – my regular country drives usually follow the road that runs along the escarpment of this valley. 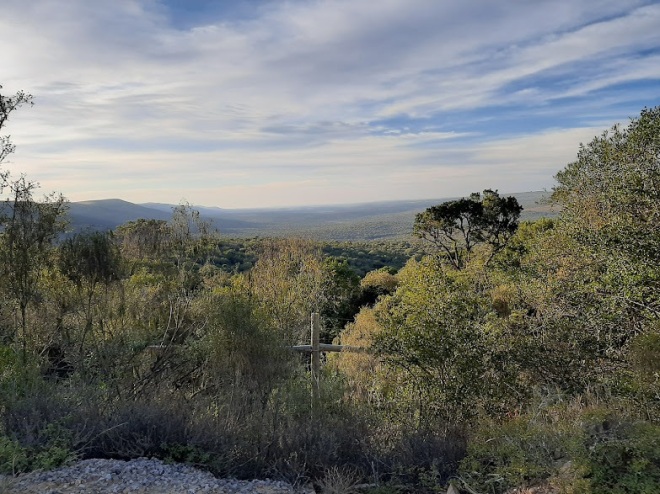 So, our world is not all brown, dry and dusty. The greens in the veld are hardy and delight the eye. Once the rain comes the wild grasses will green – as will our lawn – and soften the landscape once more.

Gardening here is not an easy undertaking, given the drought, the large size of our garden, and that I am mostly the only gardener. There hardly seems time to see to the general needs of the day, so gardening tends to sit on the back burner. After all, the clay soil is baked hard; the summer sun shrivelled any fragile seedlings; there is no water to spare for the garden – especially as we only receive water every second day and often endure several days sans water in our taps. This can be quite discouraging … yet, whilst I have let my vegetable patches lie fallow and I mostly rely on indigenous plants to keep me going, I have not remained idle.

I happened across this photograph taken in May 2015 – probably to brag about the cascade of yellow blossoms from the canary creeper. This is indigenous to the area where I live and grows with no help from me. In fact, until this long drought really wreaked havoc on the garden, I used to prune it back or even pull some of it up after flowering! I wouldn’t do that now: every bit of green that survives without having to be watered is a boon. 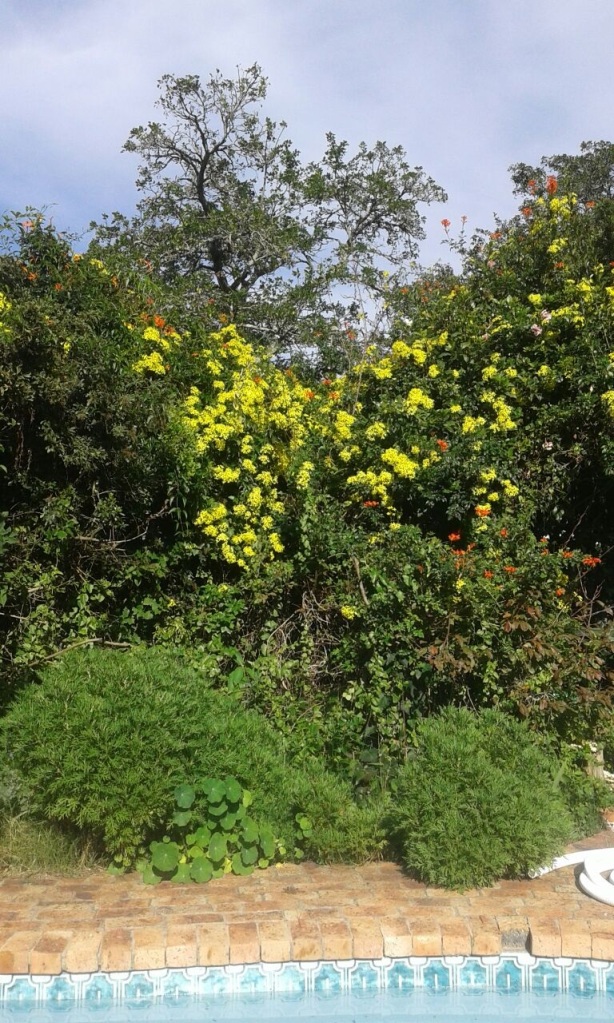 In the background is a tall Erythrina caffra that grows in our neighbour’s garden. It is covered with leaves still. In the left of the photograph you might spot some orange flowers of the golden shower creeper that formed a mantle over the trees that had grown up next to the pool during my working years when I had next to no time for pruning. The orange flowers on the right are Cape honeysuckle – another indigenous plant that (used to) runs riot here. It too used to be cut back or even pulled out once it had flowered. Not anymore! The two green bushes in front would be covered with white daisies from time to time, and you might recognise some nasturtium leaves peeping out from under them.

So many of the bushes and creepers have died that I spent several months (helped on occasion by an itinerant gardener who could wield a saw more easily than me) cutting them back to reclaim a small patch of garden. The daisy bushes have died and in their place I have planted a seedling of a cabbage tree gifted by a friend.

This is the photograph I took today. The Erythrina caffra is covered with its scarlet flowers. The green leaves hanging down on the right-hand side of the photograph are all that remains of the canary creeper – we had very few blossoms this year. The bare branches in the background above the large stones (which have always been there) indicate where the Cape honeysuckle has been cut back to. Many of the photographs I have taken of birds show them perched on these branches. It too has had enough of the drought and is barely hanging on – so far this tangle of honeysuckle has only produced a flower here and there.

I have turned the open space into a bird feeding area on the one side and on the other is where I grow my tiny patch of flowers – mostly from seedlings, although some seeds have poked through the dry soil. I water this patch when I can. It boasts three bird baths, some aloes and a crassula. The flowers of the latter have turned brown now, but looked spectacular only a week or two ago. The empty pots are waiting either for rain or for a steadier supply of water before they can be filled with herbs and flowers. Why all that unkempt grass, you might wonder. The ground is too hard to even get a fork into it, so it too is waiting for the softening effects of a soaking rain. Gardening requires a lot of patience!

Many regular readers have been flummoxed by my reports of the long-lasting drought in this area; of our taps occasionally running dry; the water supply being switched off at night; and now the town’s water supply frequently being switched off every second day. If you live in an area where it rains often – some of you have even complained about getting too much rain – and where you do not think twice about watering your garden; taking a shower – or even washing your car – simply because the water is always there, then our situation must seem very strange.

Grahamstown has always suffered from a shortage of water and, over the years, various plans have been put into place to bring more water to the town. The original town nestles in a valley but with time the suburbs have crept up the hills on the west and east – and the population has increased several fold. In pre-Covid times we also have a huge influx of university students and scholars who fill the boarding houses of a number of schools.

I have mentioned that we now depend on water from the Orange River that reaches us via the Fish River. Of course it is a lot more complicated than that. Here is an explanatory excerpt from an article that appeared in our local newspaper:

[The] Eastern supply system draws water from the Orange-Fish River Inter Basin Transfer Scheme. This water has a long journey, starting at the Katse Dam in the highland mountains of Lesotho, then down the Orange River which flows into the Gariep Dam in the Free State, from there water is diverted through a long tunnel into the Fish River which is diverted to a weir and another tunnel to the Glen Melville Dam north-east of Grahamstown.

The western supply system relies exclusively on rain falling into catchments above four local dams. Jamieson and Milner Dams, two very small dams (about 12% of the total western supply) at the top of the New Year’s River catchment, are unreliable during drought and can contribute about 1ML/day.

I drive past the Jamieson and Milner dams almost every week. Both dams, next to each other, are situated on the upper reaches of the New Year’s River and would normally have a combined capacity of 830 000m³. When we arrived here thirty three years ago, both dams were filled to the brim and supplied our town with additional water. You wouldn’t recognise Jamieson as a dam in a photograph as you are more likely to mistake it as a hollow between hills. Look at the photograph of Milner Dam below and know that you are looking at the face of a drought and an aspect of a town with a water crisis:

There was an acrid smell in the air and the usually clear blue sky had turned a pale grey. The sweetish notes suggested a grass fire, although no smoke was visible from our garden.  That was until we drove to the top of the hill.

A veil of thin grey smoke rising into the air was clearly visible against the blue sky that had been hidden from view further down the hill. Judging from the direction the strong Berg wind was blowing, it was easy to tell why. Once on the N2, we could see the thick smoke billowing on the slope of the Rietberge that overlook town.

The extent of the veld fire was more evident from the 1820 Settler’s Monument.

As the sky darkened, the flames racing through the dry grassland were clearly visible – the choking smoke had now been blown right across town, filling the valley and moving way beyond the town. 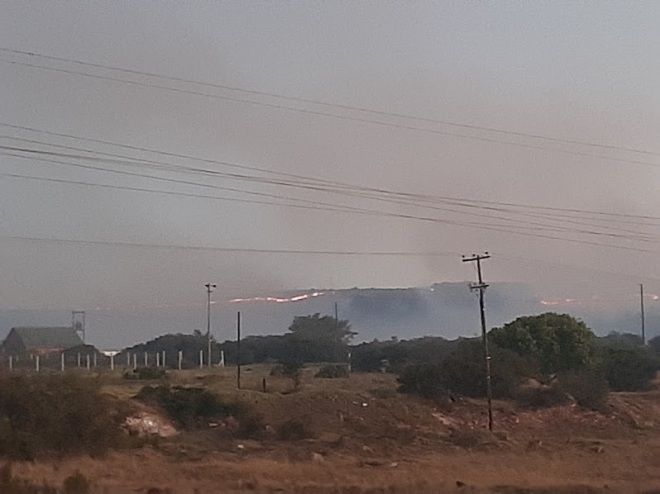 It was apparent that the flames had taken hold and were blackening the mountain in a fury; their hungry journey hastened by the strong wind and the dry conditions of the veld.

The fire burned late into the night. We woke to a black mountain that now looms around us as a stark reminder of fires in the past and of how careful we must all be as the veld is tinder dry right now.