Regular readers will know that I am a fan of Earl Grey tea. Along my tea journey I have discovered that some brands are more delicious than others – a few are to be avoided at all costs! We do not get a wide variety in this country; the two most common brands are both worth having and I keep my supply topped up. How dreadful to find no Earl Grey to drink!

Some will scoff at that remark for the fragrance and sophisticated scent created by the addition of the oil of bergamot orange peel is not everyone’s cup of tea. I was recently gifted a box of Loyd Earl Grey tea bags. 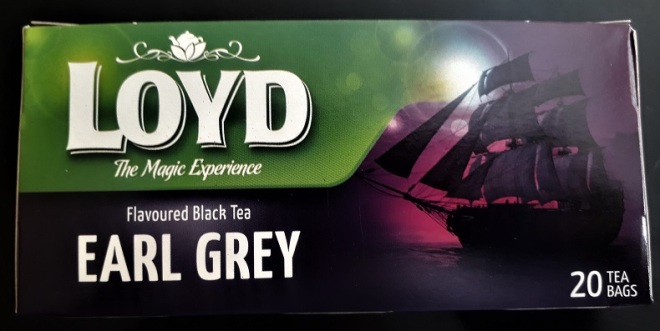 The tea clipper on the box plying its way across the darkening sea is a nod to the historical trips made across the ocean from the Far East to Europe, each ship carrying its precious cargo of tea leaves. If you have visited London, you might be familiar with the Cutty Sark which was among them. So, there is an air of mystery as well as an allusion to the magic referred to in the by-line, the magic experience. When you consider the origins of the tea trade, there is something ‘magical’ about the way leaves from the same plant can be conjured into creating a drink with different hues and tasting experience.

The box informs us that we are about to brew black tea with bergamot flavouring. I wonder what blend of black teas is used. It must be a blend or else we might have been enlightened about the origin of the tea. In fact, we do not even know where the tea is sourced from. What we do know is  that this tea is produced in Poland!

The proof of a tea is in its taste. Brewing a tea bag for the requisite five minutes produces a tea with a good amber colour. 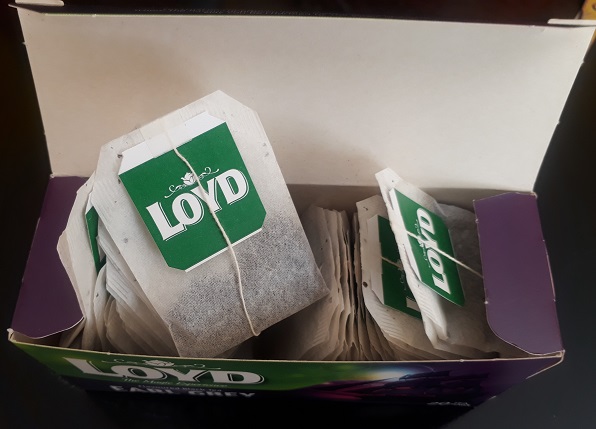 It is a refreshing tea; has a pleasant taste; and is perfectly acceptable as a member of the Earl Grey stable. For those who would like to try Earl Grey but are put off by the aroma and the idea of drinking a ‘scented’ tea, this might be a good brand to start with. As someone who enjoys a strong tea, I find that although this makes a refreshing drink, it lacks a pronounced bergamot flavour. On balance, Loyd Earl Grey tea is worth a try and deserves a place in my tea cupboard.

What springs to mind when you read or hear the word PICKWICK?

Would it be The Pickwick Papers by Charles Dickens? Correctly titled, The Posthumous Papers of the Pickwick Club, this was the first novel that great writer published – not in novel form but initially as a series of monthly instalments published by Chapman and Hall. This is an excerpt from the trial, which I have selected for the delightful drawing alongside.

If you click on this picture you will find the text easier to read.

It comes from an anthology of my mother’s entitled Humorous readings from Charles Dickens by Peter Haworth and published in 1939. Such connections interest me, so forgive my digression: I see he was the Professor of English at what was then known as Rhodes University College – now Rhodes University – in Grahamstown, which my mother attended as a student and where I now reside. I am guessing it was one of the texts she studied at the time.

If reading Charles Dickens is not your cup of tea, would the word PICKWICK ring any tea bells in your head?

Pickwick seems such an English name that I was taken aback to discover that this blend of mostly Sri Lankan teas actually comes from the Netherlands! Not only that, but it was originally known as Douwe Egberts – a name I readily associate with delicious instant coffee that we can purchase here. The mystery was solved when I read that it was the wife of one of the directors at Douwe Egberts, who suggested this very English name after having enjoyed reading none other than The Pickwick Papers, so there is a connection after all!

Note the dew drops (freshness) and the picture of a tea clipper on the cover of the tea bag. In their day these were the fastest trading ships to ply the oceans, so there is a suggestion of speed to underscore the freshness of the product within.

As with so many of the teas I have had the privilege to taste, this was a gift – sadly I have not seen it available in this country for, if it was, I would have no hesitation in purchasing some. This Earl Grey tea was delicious!

Good tea, special tea, out of the ordinary tea, deserves a special teapot and cup.

Today I offer a trio of teas I have enjoyed from my collection. The first is a natural black tea produced in Mauritius under the Bois Cheri label, which is meant to be akin to English Breakfast tea. Perhaps I have been spoiled by the taste of other varieties, for I found this tea to be a little on the ‘thin’ side so that it requires a longer than usual brewing time to extract a reasonably strong flavour from the tea bags.

As the box suggests, the Bois Cheri tea plantations were established in 1892. It also promotes the fact that this tea is rich in antioxidants. There is a widely held belief that antioxidants can help remove free radicals and decrease cell damage in the body, which apparently makes tea one of the healthiest drinks available.

Another gift was this truly delicious Lapsang Souchong tea produced by Taylors of Harrogate. This intense and smoky tea has always been a favourite of mine, although I have learned to carefully choose who I offer to share it with as the smoky aroma is not appreciated by the unadventurous. 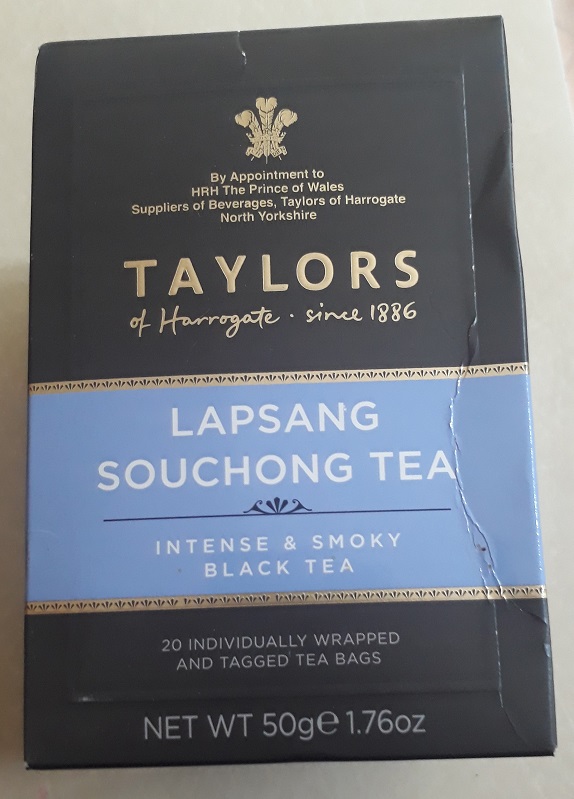 Taylors have been producing tea since 1886 and describe their Lapsang Souchong tea as coming from northern Formosa, where the leaves are dried on bamboo over smoking pine wood fires. This is what imbues the leaves with that delicious rich, smoky flavour. I think the tea bags inhibit the full flavour one gets from loose tea, nonetheless, this tea is the ideal companion to reading a good book!

Closer to home is the Earl Grey tea that is blended for Woolworths in South Africa. Despite my preference for loose tea, these tagless teabags are so full of flavour and aroma that I bought another box on a recent trip to Port Elizabeth.

I have often extolled the virtues of Earl Grey tea, so suffice it to say that I endorse the by-line on the box which, rightfully, claims that this is a deeply aromatic tea with a bold bergamot citrus flavour.

There was a brief period when Earl Grey tea of any brand was unavailable in our town – a situation that has fortunately been rectified. Feeling rather desperate for some, I was delighted to find this box of Closemyer Earl Grey tea lurking on a shelf in between organic herb teas, almond flour, and chai seeds among other items. Not having tried this brand before, I bought it.

Naturally I boiled the kettle and eagerly opened the box as soon as I got home … and was assailed by a distinctly chemical smell! This smell was so pervasive that it permeated the tiny foil-wrapped tea bags. Each tea bag is so tightly woven so that it initially ‘floats’ on the water like a little buoy … not good news. Well, neither is the taste. I tried it out on family and friends. Verdicts (before even tasting the tea) ranged from “insecticide” to a “very bad cough mixture smell”. The brew itself is pale, thin-tasting, and distinctly artificial.

What ingredients would you expect to be listed on an average box of Earl Grey tea? Apart from a black tea base, surely you would expect to find bergamot? Bergamot being oil from the rind of bergamot orange. Given the history of tea, the Chinese are generally credited with having first developed scented and different flavoured teas. As  Closemyer Earl Grey tea is a product of China – surely it would be a top class tea?

I’m afraid not. We all know that the citrusy flavour of Earl Grey comes from the addition of natural or synthetic bergamot oil – the problem with the Closemyer version is that it is overwhelmingly synthetic in smell and taste. So synthetic in fact that the ingredients are simply listed as … Earl Grey tea!

Reluctant to waste good money, I have valiantly imbibed several cups of this tea – with and without milk. The tea is not to be recommended and so I have finally succumbed to the fact that as it brings me no pleasure, the rest of the bags have simply had to be binned.

My collection of teas is dwindling, mainly because we haven’t travelled anywhere ‘tea-worthy’ for some time. It thus came as a lovely surprise when a friend invited me to tea and opened her box of Co-op Earl Grey Fairtrade tea bags that she had received as a gift. Fairtrade is a word that has become synonymous with ethical products. To quote from the box “Fairtrade means fairer trading conditions and opportunities for producers in developing countries to invest in their businesses and communities for a sustainable future.” It is also stated on the box that the leaves come from strictly monitored plantations – which includes the monitoring of employee working conditions. Good for the conscience that.

We are always up for something new, and while this may be a supermarket brand in the UK, it is an ‘exotic’ brand to us. The blue and grey packaging with the sketches of leaves, flowers and an old-fashioned teapot appealed to us both.

While there is nothing new in the ingredients – we assumed the ‘natural ingredients’ referred to was the bergamot – it is always interesting to taste the different combinations of teas blended by different manufacturers. We know that both Malawi and Kenya produce delectable teas in their own right, so the truly ‘exotic’ part of this tea would be the addition of leaves from South India.

We sat outside, enjoying the warm breeze of a late autumn afternoon, savouring both the warmth and the taste of the tea. It is delicious: we enjoyed the full flavour of slightly smoky black tea infused with oil of bergamot. A calming drink, it was the perfect backdrop to a wonderful afternoon of catching up and enjoying each other’s company.

As this tea is not available in this country, we made the most of it – and poured another cup!

Something Over Tea
Create a free website or blog at WordPress.com.