We might have potholes you can almost swim in; we might have dry taps now and then; we are often sans electricity; we have cattle and donkeys roaming through the town … streets are breaking up; sewage bubbles to the surface in places; and clean water pours down the streets at times. This beautiful town is creaking at the seams and yet … fibre is coming to town.

Trench diggers have been working for months, from one side of town to the other, readying the ground for the laying of fibre. They reached our area last week – the netting along our pavement is hiding the open trenches, which were covered over only a day later. 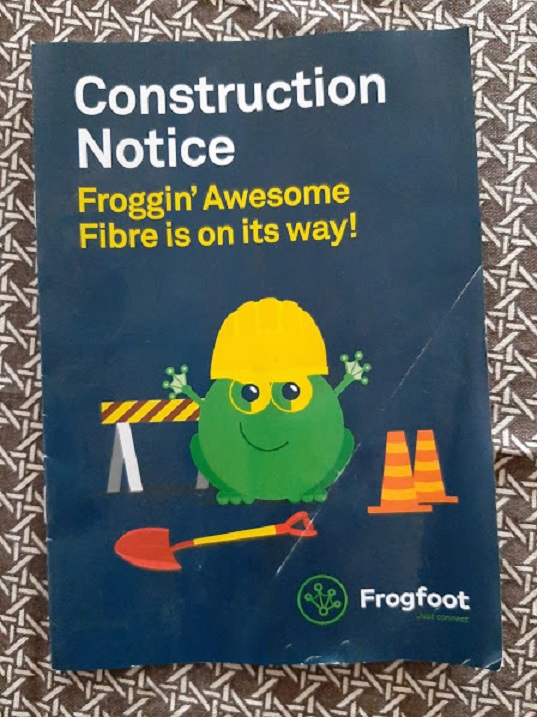 Some people have complained about the constant digging, the sound of machinery, and (quite rightly) the litter that gets left behind as the workmen make their way through the suburb. The time will come though when this will all be forgotten and they, in their turn, will connect to fibre so that their internet speed and capacity can improve. The picture below shows the section next to our drive that has been cordoned off before a moling machine was used to tunnel under it to feed the fibre through without damaging the driveway. 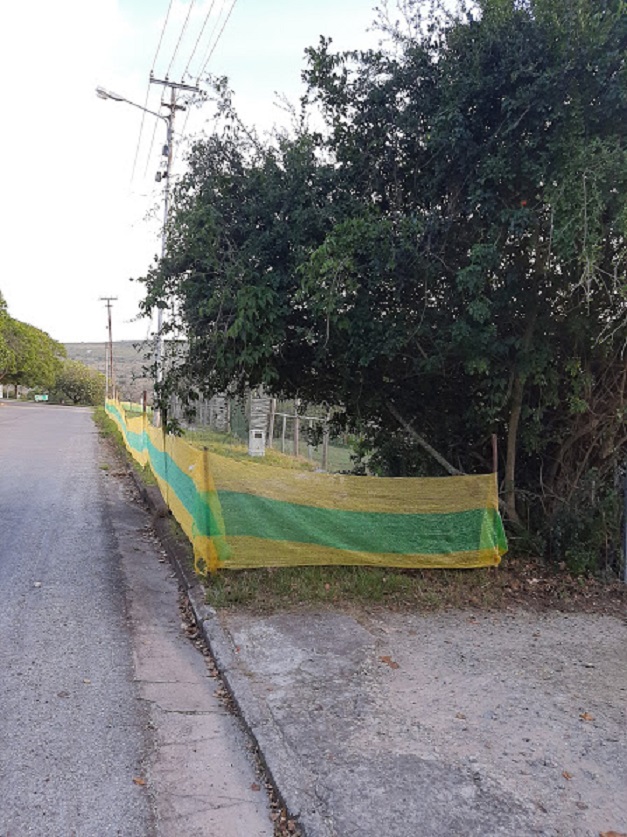 Yes, our town is fraying like a piece of old cloth. Despite all its problems, it is still a beautiful place to live. Now, the town is seamed with a fibre network filled with potential. Time will tell

These are some of the views I enjoy while driving along the Highlands road in the Lothians area not far from town: 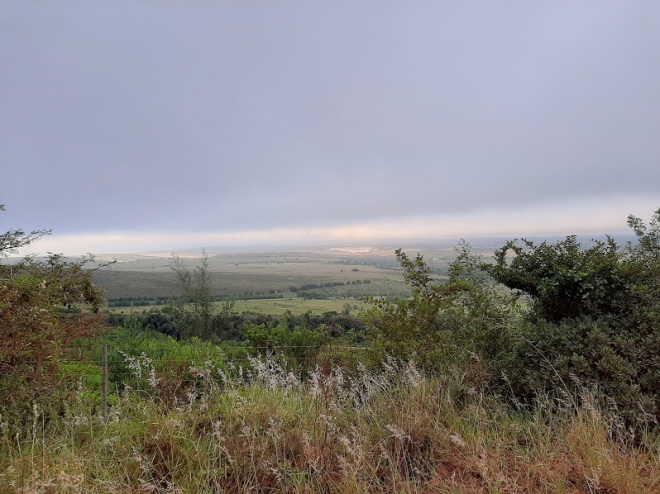 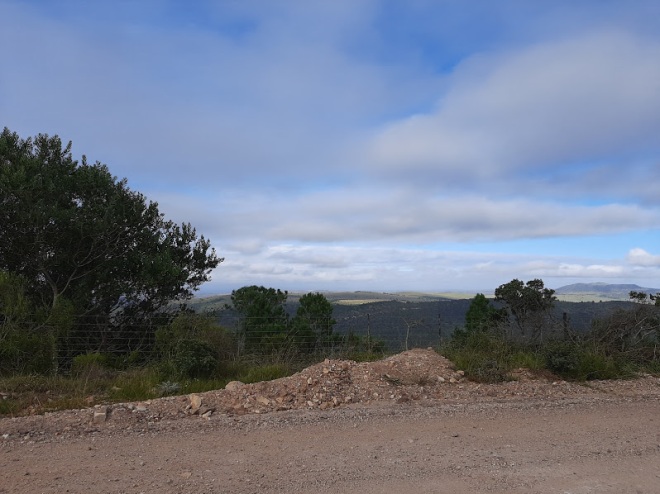 It is along this road that we sometimes see a variety of wild animals as well as cattle, horses and sheep. It is a tranquil place to be: the area is filled with birdsong, butterflies, insects and spider webs. It is a place to forget about COVID-19 and to relish living in this beautiful country.

There was a time during the Anglo-Boer War (1889-1902) when the Boers adopted guerrilla tactics to harass the British forces. As the advancing commandos of Generals Jan Smuts and P. H. Kritzinger had attacked towns in the Eastern Cape, Grahamstown called upon cadets from local schools to assist with defending the town. Trenches were dug around the perimeter of the town.

This happened during March 1901. For about ten days these trenches or schanze were manned by school cadets from St. Andrew’s College, Kingswood College and Graeme College. Unmarked remnants of these trenches can still be seen if one has a careful eye.

None of these boys saw any action and not much information is readily available about their contribution to the defence of the town. What we do know is that the St. Andrew’s College cadets (Detachment No 4) manned their post on the fringes of the old golf course for ten days before standing down. It transpires that Kritzinger’s forces only reached as far as Carlisle Bridge, about 127Km away. In 1997 the school erected a marble tablet to commemorate this event.

Those St. Andrew’s College cadets voluntarily forfeited their soldiers’ pay, having voted to put it towards the building of what is now known as the Drill Hall.  This memorial can be located at 33°17’51.90”S; 26°30’14.60”E. The trenches they dug, though overgrown, are still visible.

Apart from the several flowering trees that are brightening our landscape, here are four interesting trees I have taken note of over the past week. The first one is a very old tree showing the scars of its long life. 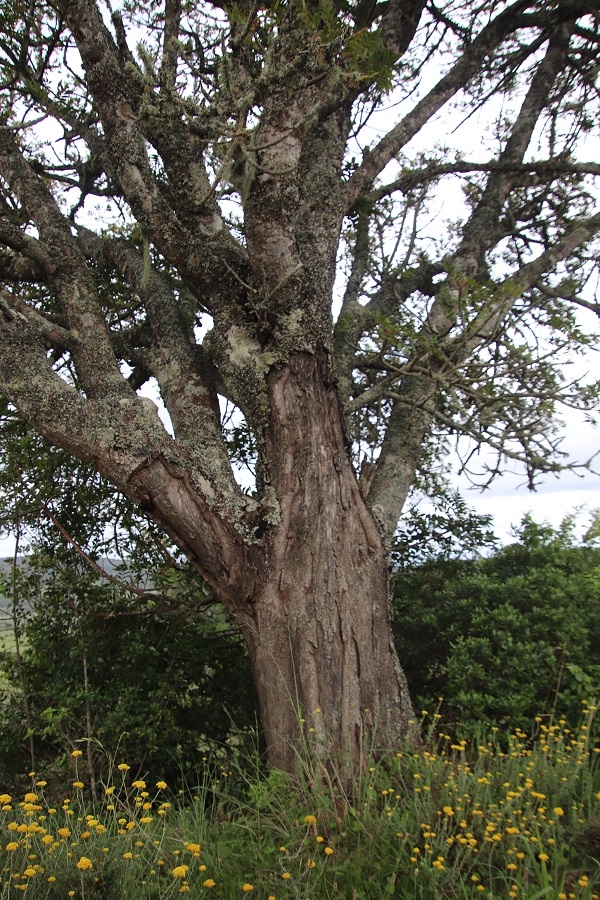 This sturdy old tree grows next to a country road I frequent. It is covered with lichen and has produced several tangled branches during its lifetime. Like many large trees, it seems to represent solidity and a determination to face all obstacles.

Then there is a rather pre-historic looking tree that grows on the hills around Grahamstown, the Oldenbergia grandi.

I have featured the flowers of the Burchellia bubalina before. This is a young bush – one of many blooming at this time of the year: along the road, next to rocky outcrops, and on the local hills.

Lastly, here is a windswept tree growing on the edge of the Rietberg that forms one of the hilly borders of our town. 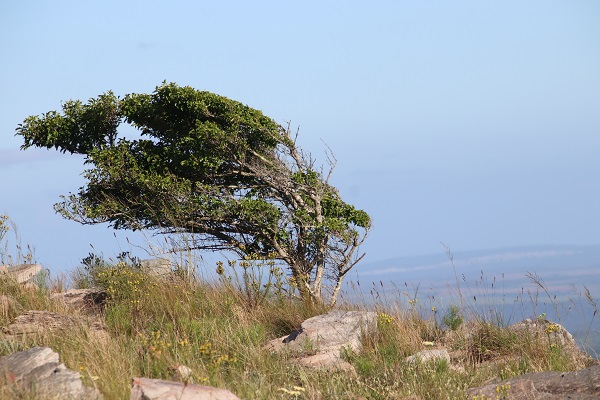 This one grows on the pavement outside our garden, so we have been able to enjoy the beautiful purple-mauve blossoms of the Jacaranda – a colour that is very difficult to capture accurately on film. 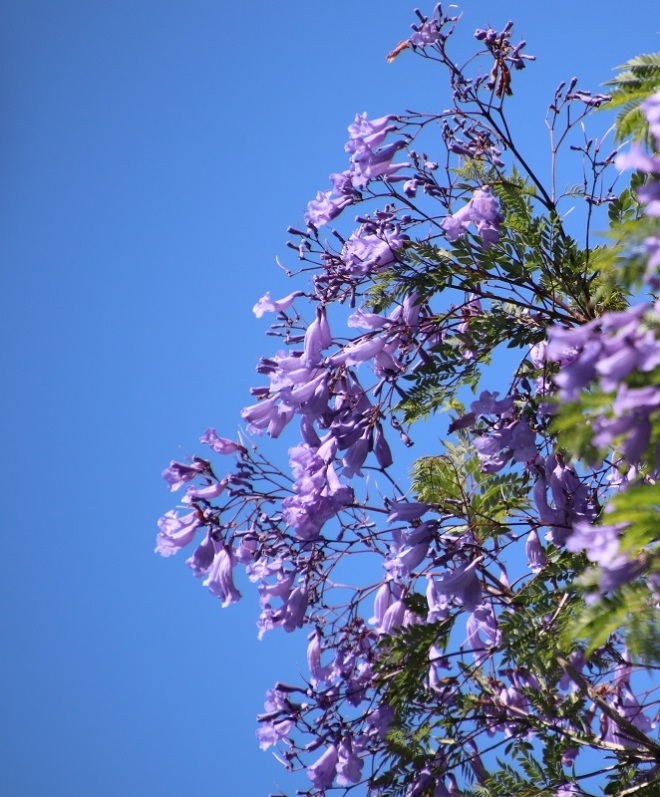 Jacarandas were brought to South Africa from Argentina in about 1880 for ornamental purposes – particularly for public spaces, such as streets. Those planted along our street look their best when they are in full bloom at this time of the year and carpet the ground underneath them with their lovely blossoms.

Here is a better view of them – the ones on the left-hand side of the street are Brazilian Pepper trees. 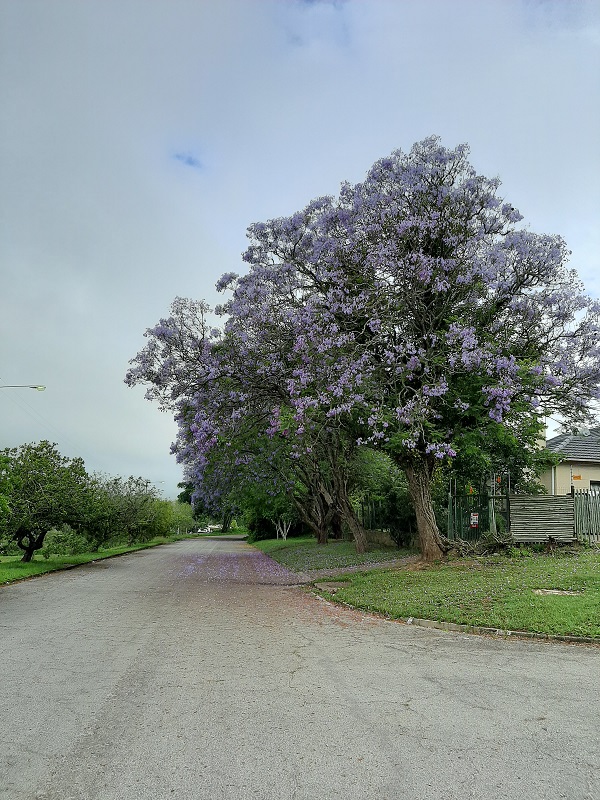 The carpet of flowers look very pretty early in the morning, before vehicles have driven over and squished them.

Jacarandas have been planted as street trees in town too. The dark shapes you can see in these trees are seed pods that have already formed. 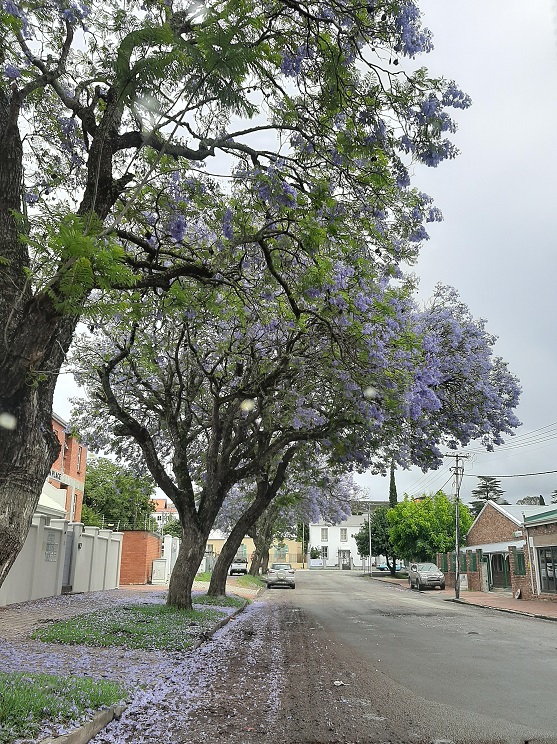