Kudu (Tragelaphus strepsiceros) are such common antelope where I grew up, as well as in the Eastern Cape where I now live, that I am taken aback at how relatively few photographs I have of these majestic, regal-looking animals. They are awesome to watch as they move elegantly through the veld or stand stock-still and look at one, totally unaware of their fine features, silently waiting for you to leave so that they can continue with their meal in peace.

They are mainly browsers.

Although they graze too. 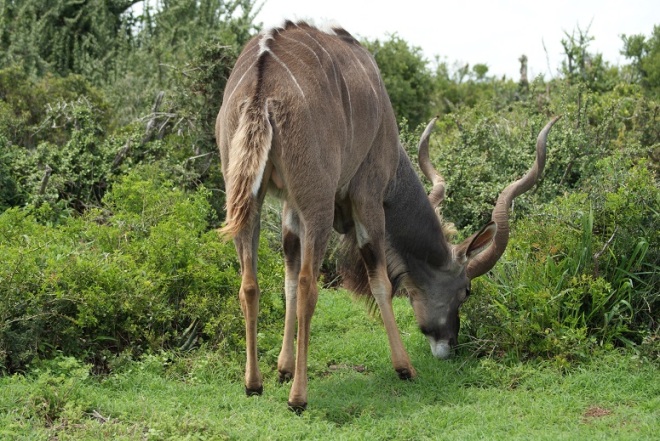 I had a particularly close encounter with a kudu bull whilst walking through the Namib Naukluft National Park in Namibia over forty years ago: I had separated from the group and taken a narrow path through some thick bush that would lead to a dry riverbed lower down. I turned a sharp corner and came face-to-face with the unsuspecting Kudu bull, not more than a meter away. We eyed each other briefly. Then he turned away quietly to go down the path. I watched him but did not follow and allowed the unique experience to wash over me again and again before I joined the rest of the party.

While they are protected in our national parks and game reserves, during the hunting season kudu on private farms and in hunting areas are shot mainly for their meat, although some bulls are earmarked for their magnificent horns.

These horns were presented to the First City Regiment in Grahamstown by the then Duke of Montrose – then Colonel-in-Chief of First City – on the occasion of his departure for Scotland in July 1989. They originated from his ranch in the then Rhodesia. 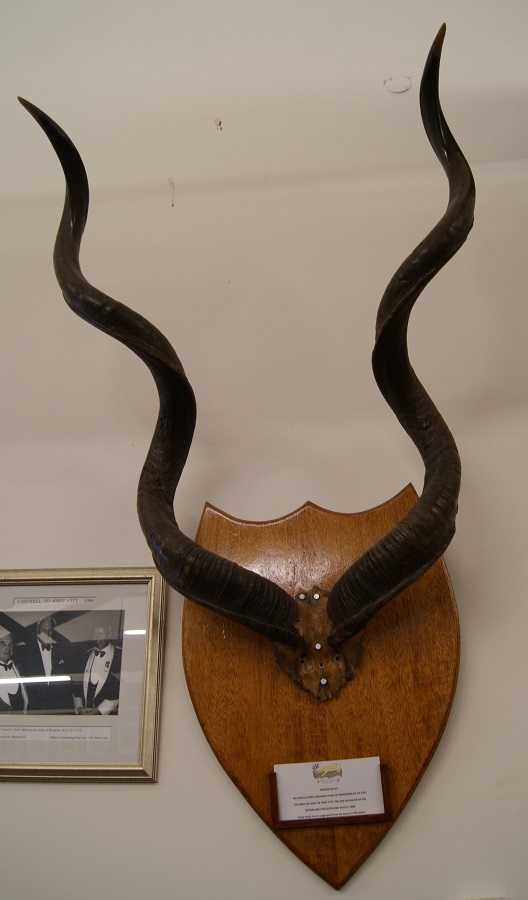 The females do not have horns.

As one drives along the network of South African roads one encounters numerous road signs warning motorists to watch out for kudu – especially at night. 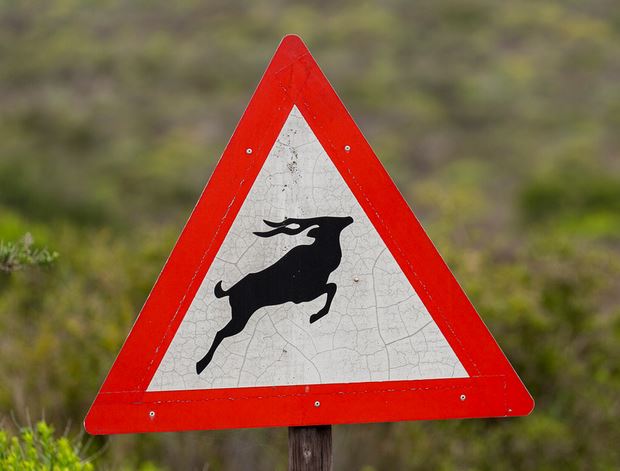 Kudu are the main culprits, although one needs to be on the lookout for other forms of wildlife too. Kudu are large animals, weighing up to 270 Kg and have a tendency to jump into the road at night after being dazzled by the headlights of the vehicle – crashing into the vehicle, causing extensive damage and even death. We once had a young kudu bump into the side of our vehicle early one misty morning. Fortunately, we were travelling slowly and it proved to be a sidelong encounter from which both parties emerged unscathed. The presence of an abundance of kudu creates hazardous driving conditions for motorists in the Eastern Cape and so this encounter served as a sober reminder of the dangers of driving in the country around here between dusk and dawn.

One of the most majestic animals we see is the Kudu (Tragelaphus strepsiceros). They carry themselves so elegantly and look at one seemingly with the confidence born of knowing they are a cut above the rest. Look at the colouring of this beautiful female kudu with its tawny brown body, greyish neck and the stripes on its back. Both males and females have a conspicuous hump on the shoulder. 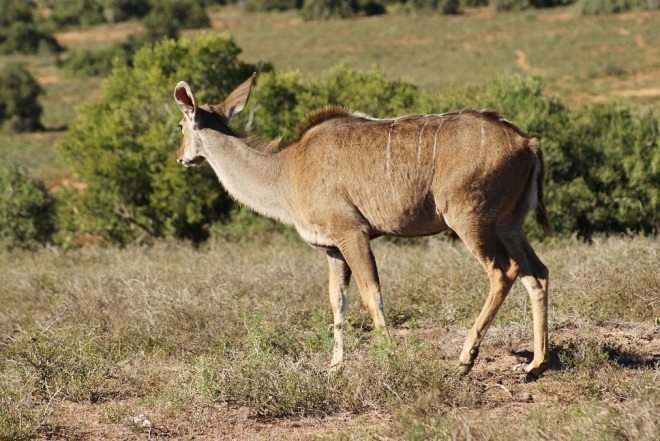 Note the fluffier fur of this immature kudu.

Only the male kudu has horns. You can tell this is a young kudu bull for its horns have not yet started to twist into the familiar spiral pattern. The spectacular horns of the kudu are used to fight each other for the right to mate with females.

You can see this pattern in the image below. Note the chevron-shaped white band across the face too.

Kudu are large antelope and rely on their disruptive colouration for camouflage as the stripes help their bodies to blend into the background – from the perspective of possible predators. They sport a mane of long hair from the back of the head to their tail that helps to disrupt their outline. An interesting characteristic of kudu is their large ears. 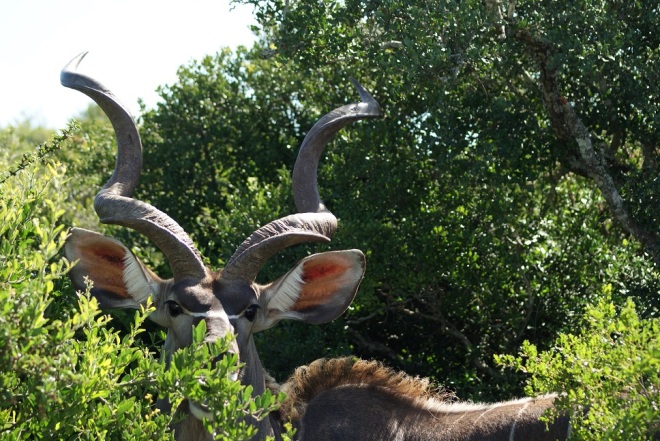 NOTE: Click on a photograph to see a larger image.

Naturally enough, we expect to see Cape Mountain Zebra (Equus zebra zebra) in the Mountain Zebra National Park situated on the northern slopes of the Bankberg near Cradock.

While we saw a lot of them, a variety of antelope populate the area too. Among these are Red Hartebeest (Alcelaphus buselaphus caama):

This is a predominantly grazing species that prefers medium-height grass and so are plentiful in the plateau area of Rooiplaat and Juriesdam.

It is wonderful to see large herds of South Africa’s national animal, the Springbuck (Antidorcas marsupialis), grazing in the veld all over the Park.

We did not see as many Gemsbok (Oryx gazelle) as we have on previous visits. This one was bounding across the grassland with considerable haste. 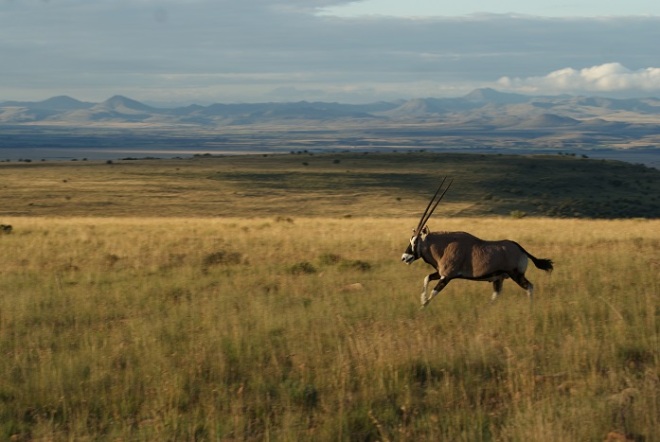 It was very interesting to happen upon a small herd of Mountain Reedbuck (Redunca fulvorufula) and to watch how quickly and nimbly they could run up the steep, rocky, mountain slope!

The Kudu (Tragelaphus strepsiceros) were scattered here and there. They are mainly browsers rather than grazers.

Sizeable herds of Black Wildebeest (Connochaetes gnou) as well as individuals abound in the Park.

Majestic Kudu horns that seem to turn to one in profile:

The urban lifestyle is so far removed from the natural order of things: eat and be eaten. While some may have fruit and vegetables growing in their gardens or on their balconies, the majority of urbanites rely on supermarkets, butchers, bakeries and the like for their daily food. Meat comes wrapped in styrofoam and plastic, bread is pre-sliced in plastic bags, vegetables are ready picked and washed on the shelves – perhaps even pre-chopped / sliced / mixed all ready for roasting or stir-frying …

That is not the case in nature, where the eat and be eaten order applies.

This is what remains of a Mountain Tortoise: 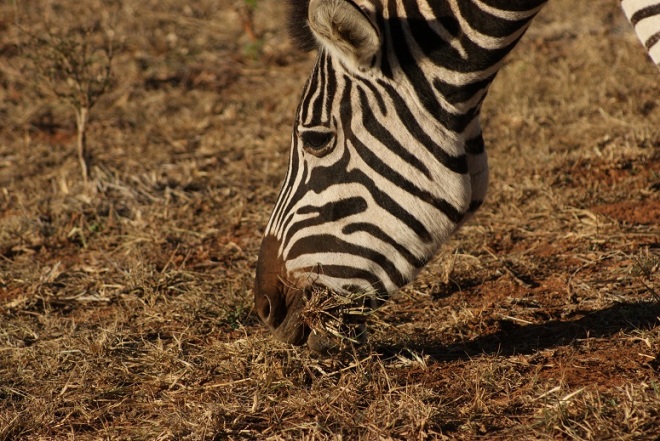 What is left of a Kudu:

The grisly end of a Cape Buffalo that had been a meal for many:

This is a Warthog grazing – note the way it rests on its front knees:

They also rest on their knees when drinking:

An elephant tucks into a nutritious meal:

The Addo Elephant National Park is hot during December. When we entered the gates at eight o’clock yesterday morning the temperature was a pleasant 22°C and three hours later the mercury had climbed to 34°C and well above that by the middle of the day. There has not been much rain of late so the veld is looking dry in most places.

Our first port of call was to Domkrag Dam which is named after an enormous mountain tortoise that used to live in the area. Domkrag is the Afrikaans word for motorcar jack. Apart from Red Bishops flitting in and out of the bank of reeds, a number of water birds were present. I was interested to observe this Spoonbill perched on a dry log in the middle of the dam with only a terrapin for company. Notice how the water has become thick with a growth of algae that clearly shows the trails of swimming birds.

This algae was being collected into a nest by a Red-knobbed Coot.

A group of three warthogs found a clear spot to drink from.

As did a family group of Red hartebeest.

Ghwarrie Pan was clear and calm. A Cape Buffalo had found a peaceful way to keep cool.

Hapoor was, however, the place for observing elephants at close quarters. This waterhole is named after a dominant bull that lived in the area for many years and had a recognisable nick (hap/bite) in one of his ears. It teemed with elephants as they sought refuge from the heat to slake their thirst, spray water and or mud over themselves, and to indulge in social interactions. Some youngsters took special delight in immersing themselves completely in the water and playing with each other while in the dam. 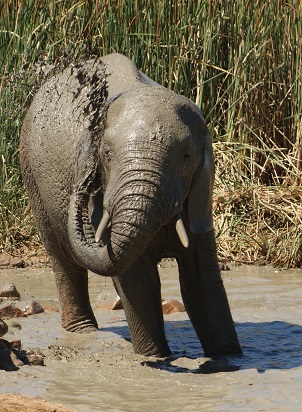 One adult decided to rest his trunk. 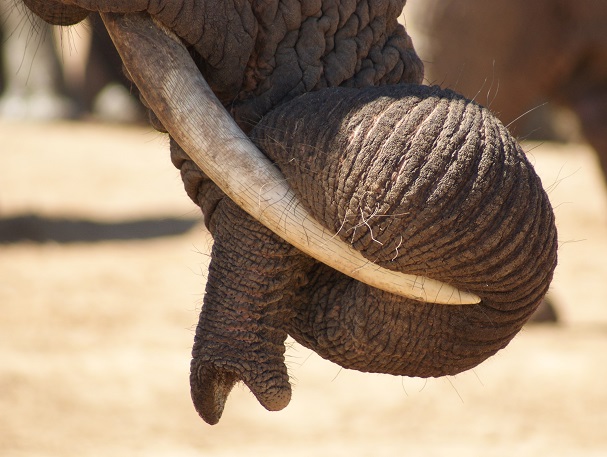 All of this activity was kept an eye on by a Blacksmith Plover and an Egyptian Goose.

It was while driving past Janwal Pan Lookout that we came across this magnificent kudu bull sensibly resting in the shade. 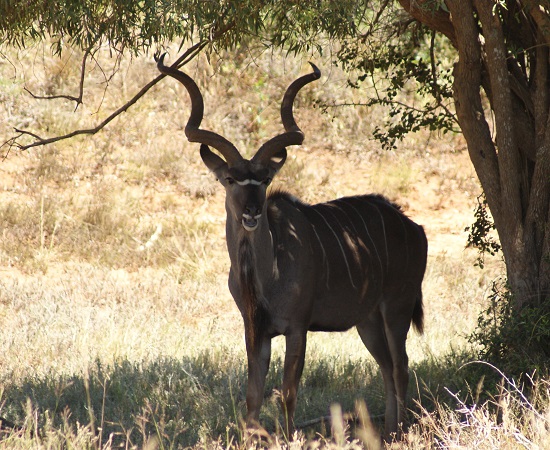 More elephants were spraying themselves at the Marion Baree waterhole. 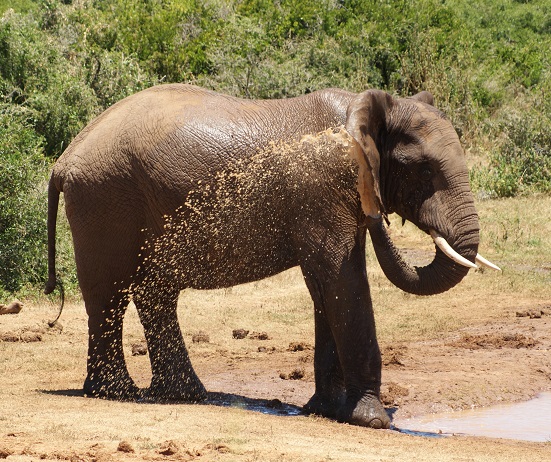 While another was drinking its fill from a small waterhole in the southern section of the park.

The Addo Elephant National Park is dry: not just brown and dry – in places it looks desiccated dry.

Some Schotia brachypetala, plumbago, verbena and pelargoniums make a brave show of their blooms in the swirling dust.

From a distance too some of the grassland areas look potentially attractive for grazers until one sees the bare patches from close up. 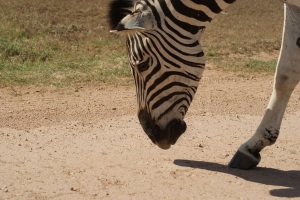 The only vestiges of green show where there has been some water run-off from the road. Even some of the waterholes, such as Rooidam, are virtually dry.

A small herd of zebras were the first animals we encountered. Photogenic creatures that they are, they formed the subject of several photographs before we moved on. Little did we realise then that we would see hundreds more before the day was over! 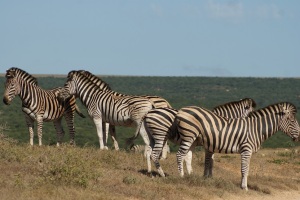 Zebras are so beautiful to look at and they turned out in full splendour, giving us the opportunity to observe – from close quarters – the variations in the patterns of their stripes. Some are broad and bold, while others are paler and thinner. Some stripes are well defined all over the zebras’ bodies, while on other animals the stripes peter out to almost nothing.

It seemed to be ‘necking’ season for all over we came across zebras resting their heads on each other as if in a show of affection.

A number of foals were evident too. Their furry appearance a stark contrast to the sleekness of their elders. Zebras won the day for their dominance in the veld. 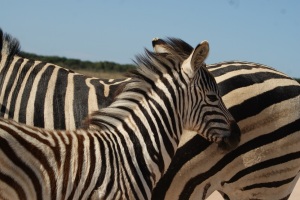 Warthogs came a close second. Family groups could be seen from far away, close to the road, in the sun, or resting from the 28°C heat in the shade. 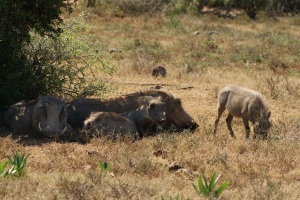 Although we were told of a large herd of elephants at Hapoor waterhole, we saw only single ones. One elephant walked resolutely towards our car, almost brushing past it within touching distance. 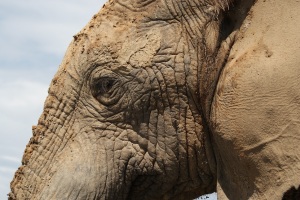 Another interrupted a buffalo enjoying a mudbath. The latter got to its feet and moved away very smartly then stood and watched from a discreet distance as if to say, “What did you do that for?” 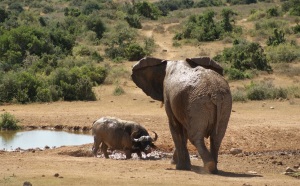 A few kudu were visible in the bush. The bulls appeared to be skittish, however, and moved into cover upon the arrival of any passing traffic. 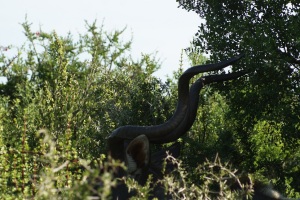 It was a treat being able to watch a black-backed jackal drink her fill from a waterhole, taking her time before trotting off purposefully as if she had a mission to fulfil.Other animals we saw were a suricate, eland and hartebeest. 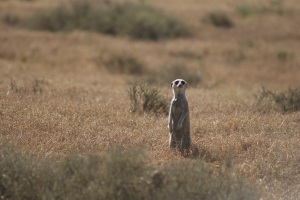 Ghwarrie dam is always a favourite place to visit and, although there were no animals other than warthogs this time, there were terrapins galore as well as South African Shelducks and Blacksmith Plovers.

Both Grey- and Blackheaded Herons showed their willingness to be photographed by standing close to the road, their eyes intent on a possible meal. 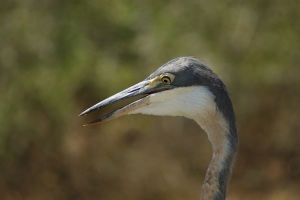 A gusty wind sprang up in the afternoon, showering us with dust and fine grit. Clouds were starting to gather and it was, sadly, time to leave. The last animals to be spotted at Domkrag? Zebras, of course! 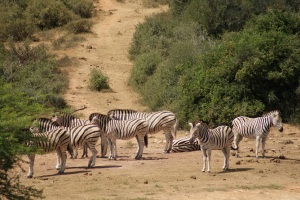 The arid conditions together with the wind and dust are not ideal for birding. I nonetheless saw the following: