Rain, any rain is welcome here at any time for we remain in dire need of water to fill our dams and provide sustenance for the veld and garden plants. I was waiting in the car-park outside our local supermarket when a light shower of rain appeared as if from nowhere.

It rained a little more.

The sun was shining by the time I got home ten minutes later!

The glory of Earth Day is that we are experiencing light drizzle in this parched area of the earth: 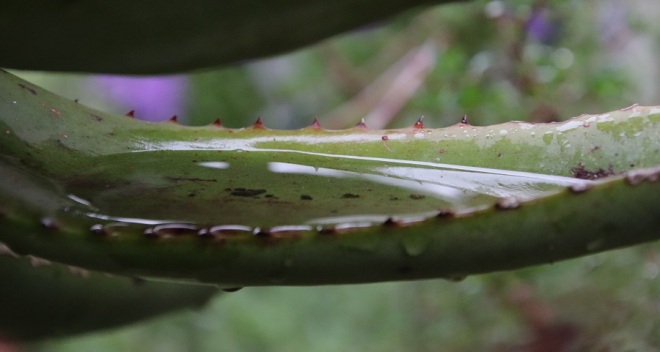 It rained a little one afternoon last week. Not enough to sink into the ground, but enough to change an ordinary view into something different. 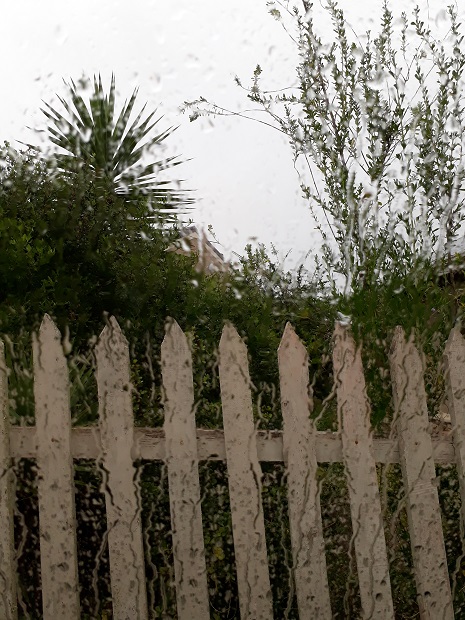 It rained enough to make people walk a little faster across the car park, but not enough to sink into the ground – or green the grass, or perk up the plants for long.

No laundry today, instead the wash line is catching raindrops. 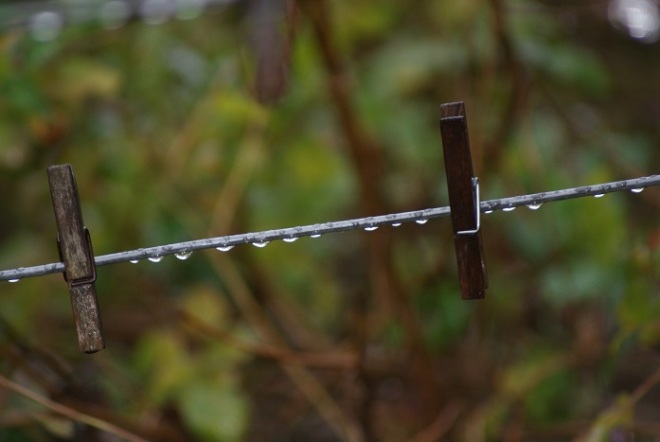 Raindrops are falling from the roof of the shed onto the last remaining strawberry plants below – drip irrigation.

Raindrops are decorating the aloe leaves. 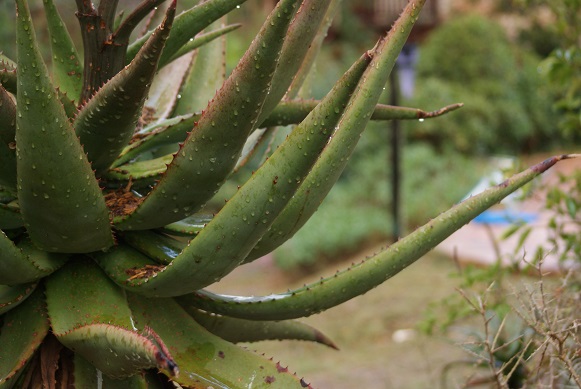 They are dripping from the lemon tree.

Raindrops are clinging to an elm tree waiting to burst into leaf.

This might be the coldest day we have experienced for a long time, but it is the happiest. Some rain has arrived at last, a gift for us all. 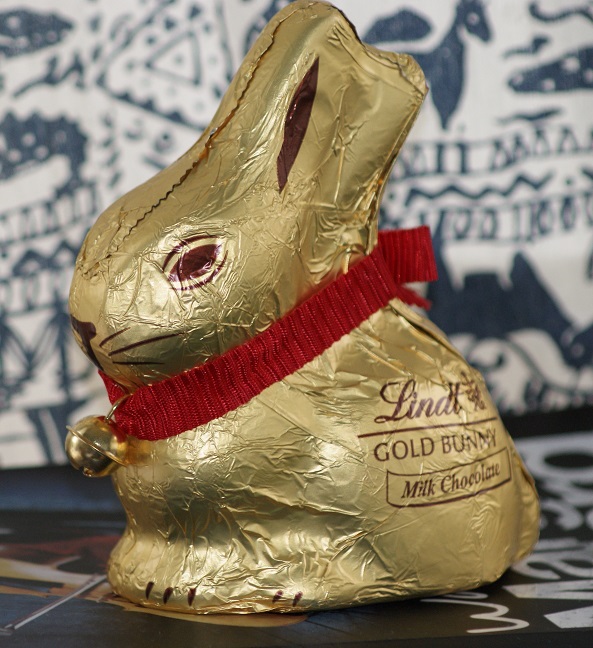 From around the country we heard from friends and family who were swimming / having picnics / enjoying leisurely braais in bright sunshine – real autumnal weather.

In our neck of the woods the weather was different: it rained. Not only did 56 mm rain fall during the day – it bucketed down, bending the branches of trees and flattening the gooseberry bushes. We didn’t see the sun and instead donned warmer layers for the temperature didn’t rise above 12°C – real winter weather.

It was a lovely day to spend indoors; a good soup day. As I drove up the hill after purchasing soup ingredients and the makings of a special dinner later, I couldn’t avoid the impressive sprays on either side of my car as it met head on the river of water racing down the hill.

The gutters on either side of the streets couldn’t cope with the rushing flow of water. The wide-mouthed drains placed at strategic points were either choked with debris or couldn’t cope either. Still, the rain fell. Familiar wet patches appeared on my study carpet: the result of long cracked roof tiles. The local roof doctor left town years ago …

It was time to prepare dinner for our guests: a good lasagne cannot be hurried. Everything was under control. While I was stirring the white sauce, something made me open the kitchen door. I was met with water cascading down the back steps and, looking up, I saw a strong-flowing stream swirling past the garage before bifurcating where the lawn begins. The other stream was splashing its way down the side steps and onto the front lawn.

This had been happening for much of the day, so what made the sight seem so ominous now in the gathering gloom? The rain had stopped. In fact, the rain had stopped at least an hour before – where then was this mass of water coming from with such energy?

I put the white sauce to once side, kicked off my shoes, and took a spade out to the street behind our house. There I shovelled clear the collected mud and debris all the way along the edge of our street frontage to the open mouth of the drain. It was satisfying to see the water flowing smoothly and obediently where it should and no longer threatening to swamp our house – at least I thought so.

Our guests arrived as I entered the kitchen looking bedraggled and red-faced from the unaccustomed exertion. P had had no luck raising the emergency services and, to our dismay, the flow of the water was strengthening once more.
He and our two guests went out to assess what had now been identified as a burst pipe across the road. One guest wielded the spade to create a furrow to divert the main flow of water from its previous path down our driveway.

A neighbour with close connections to the municipality was called and came straight over in the dark.
I assembled the lasagne and placed it in the oven.

The first water main proved to be too rusty to close manually, so the foursome out there sought another further down the street by torchlight. Success: the entire block is now sans water.

We were a grubby lot sitting around the table later. The lasagne was good though and so was the wine.