After the chilly weather of the past few days, this morning is bright and mild. I spent a timed fifteen minutes sitting in one sunny place with my camera. This is what I saw:

A Black-eyed Bulbul (Dark-capped Bulbul) eyed me from the Cape Honeysuckle; it moved to another branch and gave me a good look-over before perching on the nectar feeder for a long drink; then it came down to peck at an apple not very far from me.

A fly that had been buzzing around inspected a brick. 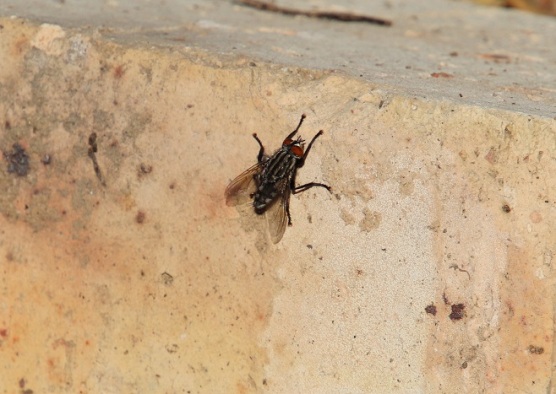 A Cape White-eye flitted through the leaves to first drink from the nectar feeder, then it too came to taste the apple. 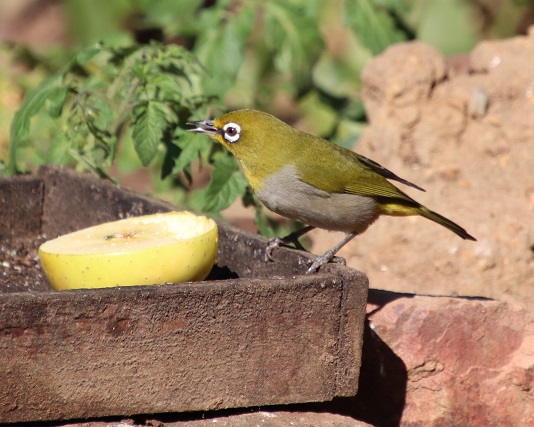 This Cape Dwarf Gecko, one of several around, came out to enjoy the sun with me.

A light plane flew overhead – our sky has been very quiet since the lock-down began in March. 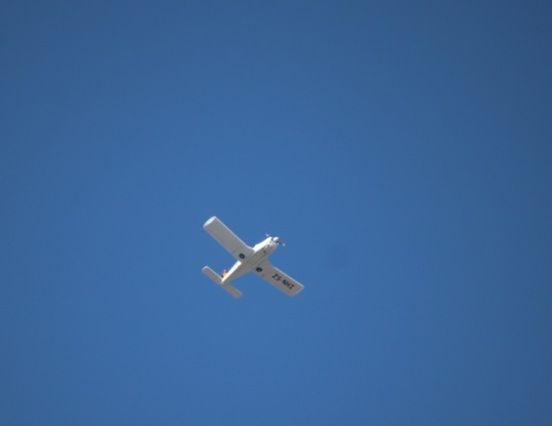 Lastly, just fitting into my allotted fifteen minutes, a spider-hunting wasp alighted on a stone. I watched it move this way and that until it flew into the shrubbery.

Three or four spider-hunting wasps (belonging to the family Pompilidae) have been daily tea-time companions for a couple of weeks. They have been difficult to photograph as they hover above or go in and out of the potted plants on the patio. I have at last captured one on a Cape Honeysuckle (Tecoma capensis) and am showing off its brilliant colours as highlighted by the sun in these three photographs: 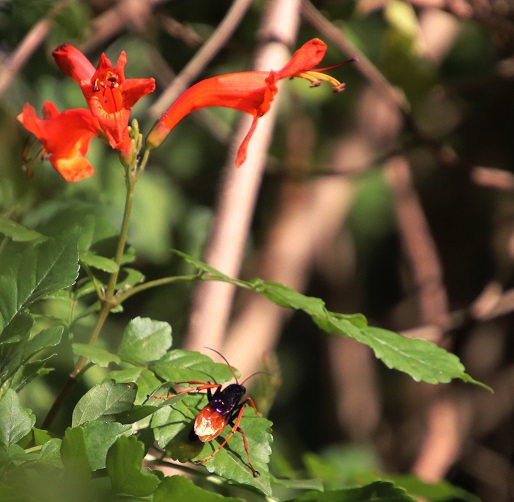 NOTE: Click on a photograph should you wish to see a larger view.

My mid-morning tea in the garden was interrupted by something odd running across the dry grass: a spider-hunting wasp (belonging to the family Pompilidae)! I rushed indoors to fetch my camera … where had the wasp got to? Then I saw it dragging the spider along the brick edge of the swimming pool. 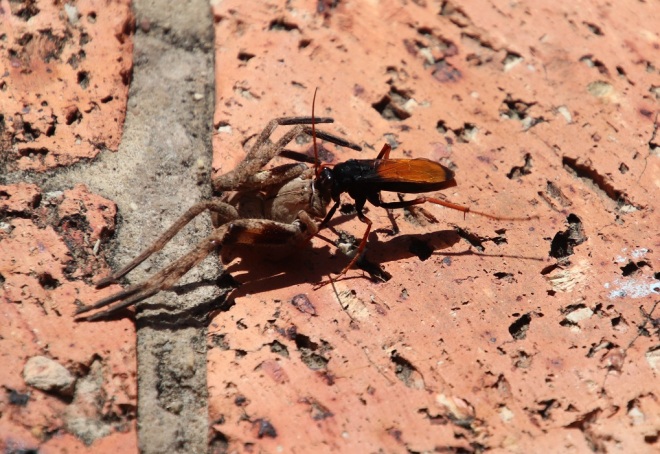 It was battling against the stiff breeze. Although these solitary wasps paralyse their prey with their powerful venom after capturing it, the movement of the legs of the spider indicated that the process was not yet complete.

It was dragging its prey perilously close to the edge of the pool when a gust of wind blew the spider over the edge. The wasp held on tightly. While this is not a good picture at all, it shows the tenacity of the wasp, which continued to carry its prey along the wall like this for some distance. 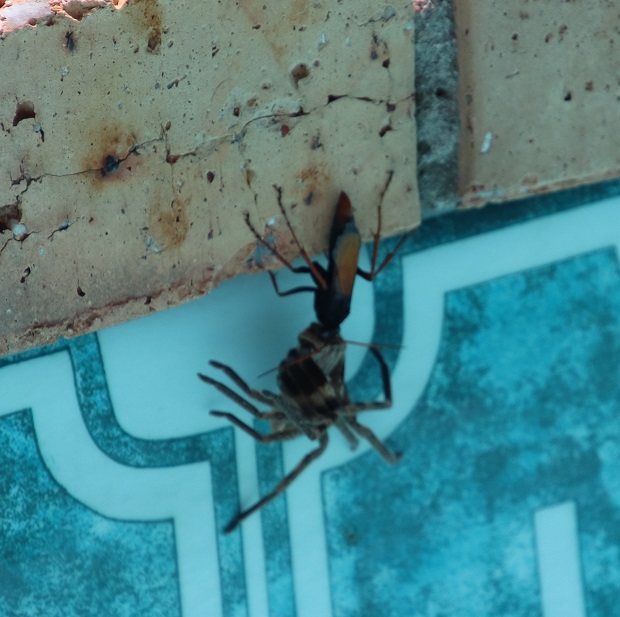 Inevitably, the wasp lost its grip and the spider fell into the pool.

The spider seemed to expand and contract its legs experimentally whilst floating on its back while the wasp flew frantically back and forth, trying to hook onto the spider. Mea culpa, I lifted the spider out of the water with the pool net and stood back to watch what would happen next. Within seconds the wasp had the spider in its grasp once more. 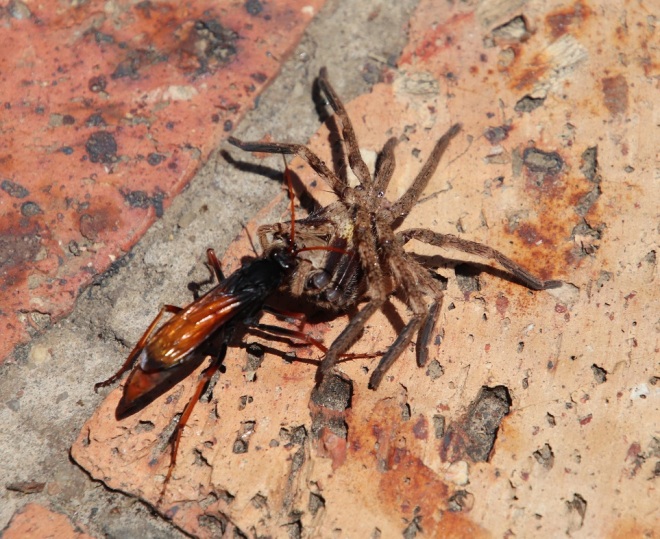 As it resumed its journey at considerable speed, the stiff breeze brought them teetering close to the edge of the pool once more. 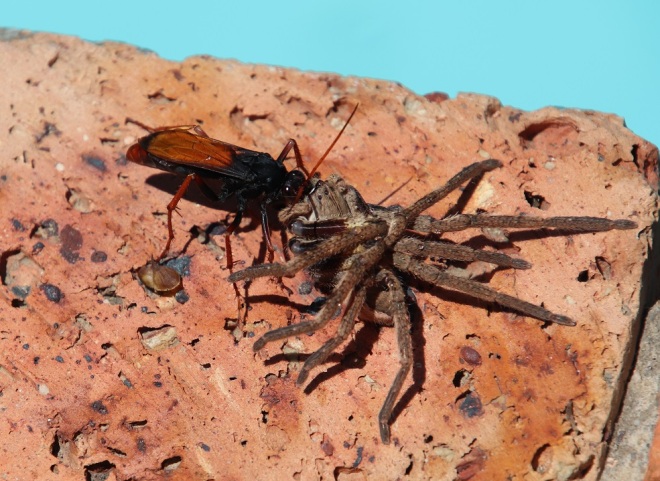 The wasp tugged and pulled against the breeze – the end of its journey was in sight: the site of its prepared burrow in a crack between the rocks at the end of the pool, where it dragged the spider down in a flash! There the wasp will lay an egg in the abdomen of the spider before exiting the nest and concealing its entrance.

NOTE: Please click on the photographs if you wish to see a larger image.

The mud wasp nests I usually find inside or outside our house look like this one on a windowsill:

Sometimes they look like this one on the outside wall of our house: 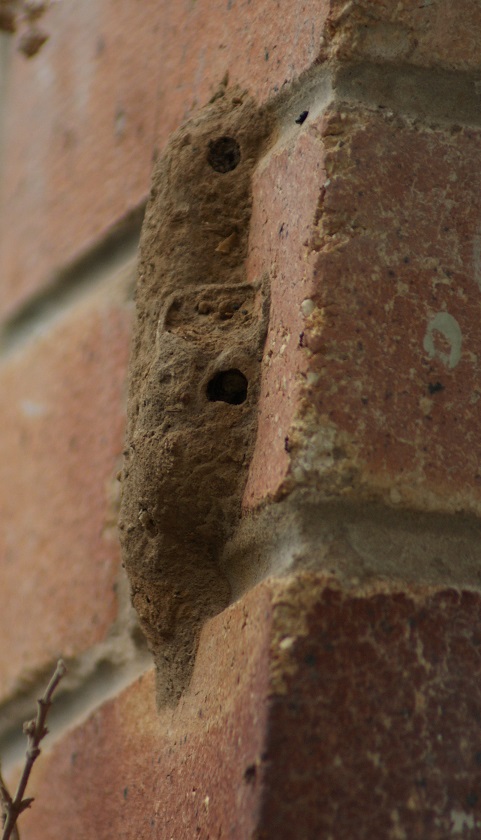 The picture below shows a wasp nest that had been built between a box on top of a built-in cupboard and the ceiling, which probably accounts for the squat shape. You can see ceiling paint on the top of it: 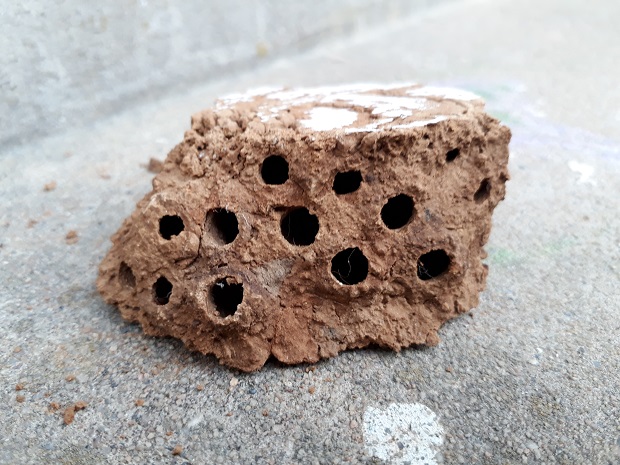 The back of the nest looks like this – note what is left of a spider in one of the cells: 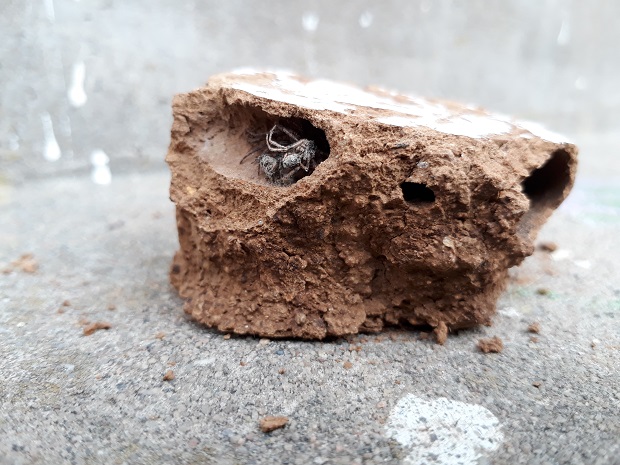 This nest was probably built by a Mud Dauber Wasp (Sceliphron spirifex) which commonly builds multi-celled mud nests attached to walls or even tree trunks. Each cell is provisioned with a spider that has been paralysed in order to provide food for the emerging larvae.

Here is a not very clear picture of a wasp spotted in the garden taking a spider to its nest. 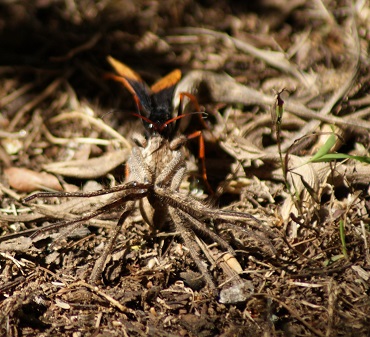 I noticed this spider-hunting wasp while I was watching birds the other morning. What attracted me to its presence was the speed with which it was running around this way and that. It seemed to be looking for something in the grass and leaf litter at my feet. 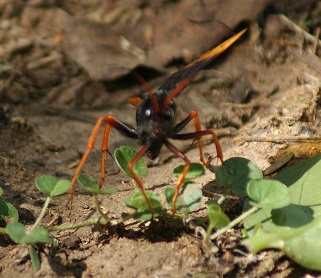 Then the wasp emerged from the leaves bearing a fleshy-looking spider. According to African Insect Life by S.H. Skaife, the wasp stings the spider in order to paralyse it rather than to kill it.

She then takes the spider to a previously prepared hole, lays her eggs on its abdomen, and covers the hole. In this way the wasp can ensure a fresh supply of food for her offspring as, after hatching, the larva feed on the spider until it is time to spin a cocoon.

Looking up from all this interesting activity, I saw an Olive Thrush collecting caterpillars for its young. 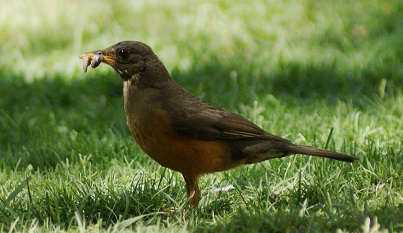 Life, for everything on this planet, is geared towards feeding the next generation.