The trees in our garden are now so tall and thick with foliage that it isn’t always easy to find the nests of birds, even if you know they are there – somewhere. A pair of Cape Robin-chats had me fascinated for days on end as they flew back and forth with food in their beaks … I never could find their actual nest deep in the shrubbery, although their offspring later made an appearance. Two Common Fiscals have plied the food trails to their respective nests for weeks (I think both have actually nested beyond our garden perimeter) and one brought its youngster to the feeding tray a few times before leaving it to fend for itself.

I located the messy nest of an Olive Thrush in a tangle of branches near the wash line, but not in a position to photograph – my neighbour couldn’t get a good photographic view of it either, although we both enjoyed watching the activity around it.This is one taken some years ago:

Much more prominent is the mud nest the pair of Lesser-striped Swallows build under the eaves every year:

The rain came at just the right time for them and they set to work straight away. The sturdy nest they built outside our front door one year has been taken over by White-rumped Swifts. Life is filled with trials for these swallows for this lovely nest, already lined with soft materials, fell down one night and shattered. Days of sad twittering followed until the pair again returned to Plan B and built a nest under the eaves around the shadier side of our house – where they have resorted to building in previous years – and this one has stayed put.

Also easy to see was the flurry of activity among the weavers as they set about constructing nests at the end of  branches of a tree in our back garden: 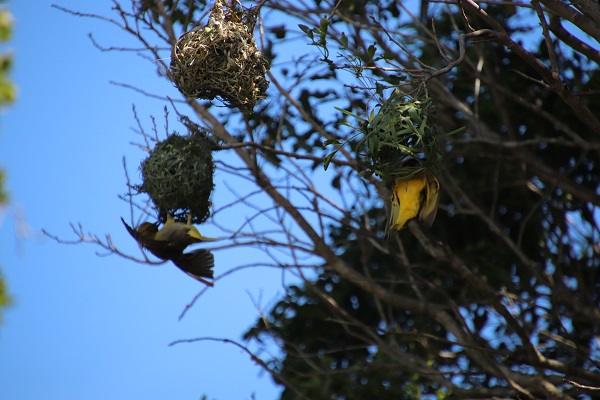 Despite the chattering and hard work going on here, within days these nests had been abandoned and the birds had looked elsewhere to create their happy colony.

A very-hard-to-miss nest, which I have featured before, is the one in which a pair of Hadeda Ibises have successfully reared two chicks:

Both chicks are in the nest here – only their dark tails are showing.

I have mentioned before that weavers are notorious for biting off the tubular blossoms of the Cape Honeysuckle to get to the nectar. This time I have caught them in the act:

The one in the centre of the picture has firmly grasped the base of the flower and is about to pull it asunder. The female below is doing the same. 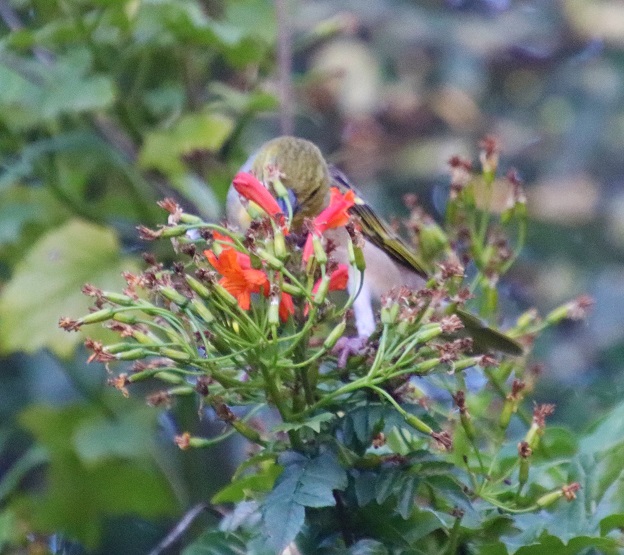 The flower tube is pulled from its base and then squeezed to release its nectar: 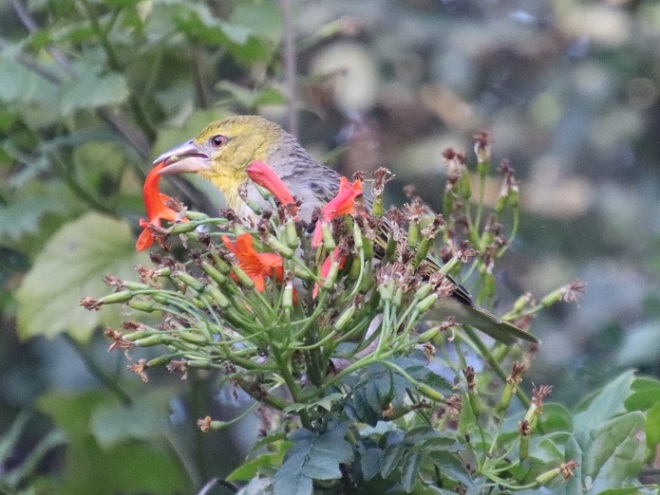 When a flock of weavers go to work like this, they do not leave much for the sunbirds, or bees or even the ants.

I am delighted to report that the African Green Pigeons are back in full force this month. Their characteristic grunting sounds are heard from early in the morning and, if I look carefully at the shaking leaves in the fig tree, I catch sight of some of them most afternoons. An exciting visitor, even though I only saw it once, was a single male Dusky Indigo bird – I have not seen these in my garden for some years. Yet another interesting visitor has been a single female Thick-billed Weaver: she has made several forays into the feeding area and has perched on the edge of the bird bath a few times – never when I have my camera though!

In other news, the ‘tame’ Common Fiscal we call Meneer still comes to collect his handout from me several times a week. These days he usually collects a maximum of two tiny pieces of meat and flies away. His rival, the ringed Common Fiscal, frequently sits in the branches above my head and eyes my offerings, but prefers to go to the feeding tray for his meals.

Depending on what is on offer, the feeding tray can get rather busy at times – look at these weavers having a feast.

While these females might appear to be chatting while they eat, it is not always a harmonious scene. Here a female weaver is telling off a Black-eyed Bulbul. He looks quite affronted. 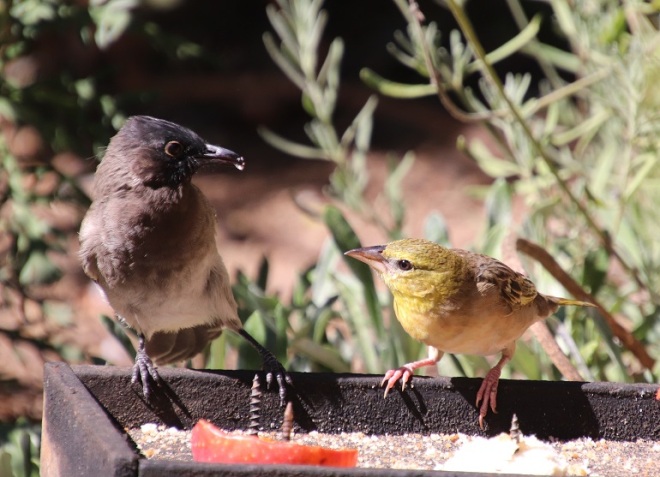 It wasn’t a good day for the bulbuls, for here an Olive Thrush is approaching one in a threatening manner. 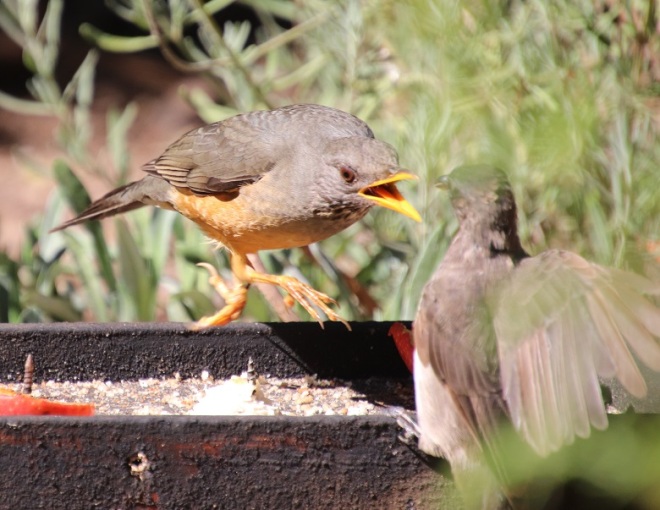 As we still have no rain, there is sunshine aplenty. These Laughing Doves are sunning themselves on the bare ground underneath the seed feeders.

Lastly, a pair of Southern Boubous have become regular visitors. They skulk around in the undergrowth or call loudly to each other from hidden perches. I have only seen one of them coming out into the open to feed at any one time. 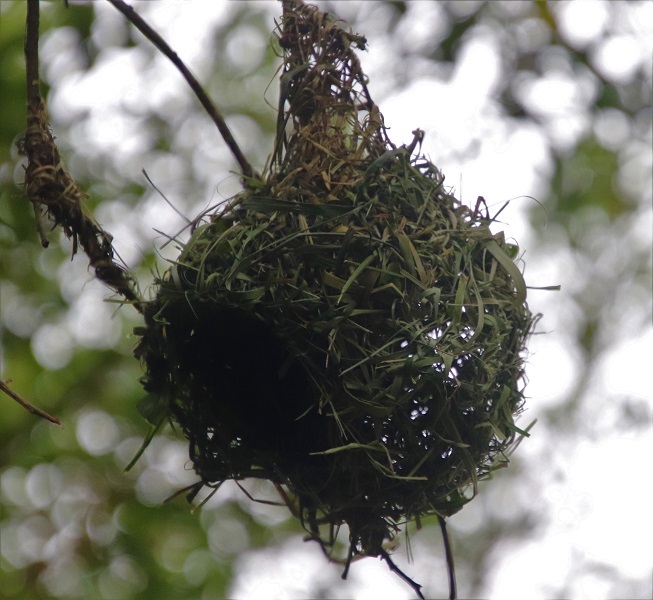 … it was not good enough.

This is not going to be about empty nest syndrome – although my children have all ‘flown the nest’ as it were – but about an empty nest.

Although it is winter now, think back to the mating season when a male weaver wished to breed. He cannot breed without a mate, but even though he is wearing his best mating outfit this is not enough to guarantee him finding one. What he has to do – and do this fairly quickly for just about every other male is doing the same – is locate a suitable site and start constructing an intricate nest that will impress a potential mate.

These birds are not called weavers for nothing. Armed with only his beak, our male weaver has to find suitable material to weave with – usually grass or the long leaves of reeds, although leaves, twigs and even fine roots can be used as part of the construction. The material must be easily available – you don’t want to expend too much energy collecting it – and pliable enough to weave with. He starts making a knot around the twig or thin branch of his chosen site with a long blade of grass. Then he constructs a circular structure by weaving blades of grass in and out with the aid of his beak and feet.

Next, he begins to weave the grass around this ring to form what will become a ball-shaped nest. The nest gradually takes shape as each blade of grass is woven through the rest and tied with a knot to make the nest secure – all done with his beak and feet. Bear in mind too that our male weaver often has to do this while hanging in an upside down position.

Once his nest is secure and nearly complete, the male weaver proceeds to strip the leaves from the rest of the thin branch. As the nest nears completion, our male is happy to display and draw attention to his handiwork – for once a female has approved it, she will mate and may even assist him with finishing off the nest. I have watched both males and females bringing in soft grass and even collecting the fallen feathers of other birds with which to line the nest before the eggs are laid.

All of these activities are completed against a background of a lot of weaver chatting and displaying, chasing other males, attracting females, looking for and eating enough food for energy, finding water … and before we know it there is a brood of young weavers which need feeding. Males might end up constructing – or at least starting – several nests in a season for their females are picky: nests need to be strong and waterproof; perhaps they need to feel comfortable inside; and they certainly must be sturdy enough to withstand the buffeting of strong winds.

Autumn passed with a frenzy of feeding the latest brood; our male weaver is ready for a winter break spent foraging for food and building up his reserves for the start of the next cycle. The chattering of weavers has all but disappeared for the time being. All that is left in a tree now bereft of its leaves and flowers are the vestiges of those initial strong knots with which he began constructing this nest: it is now indeed an empty nest.