The common garden plant, Canna indica (Indian shot), has been declared as an alien invader plant in South Africa, falling into Category 1b of the National Environmental Management: Biodiversity Act which means it must be removed from your garden. To prevent these tough perennial plants from spreading, it is best to remove them carefully, ensuring that all the dense clumps of tubers have also been dug out. Unfortunately, the Canna indica has the propensity to invade stream banks, forests and other natural areas, crowding out and destroying the indigenous vegetation.

Canna indica is a tall and vigorous grower, bearing copious small and narrow mainly red flowers. The green or bronze leaves are also narrow. The flowers are followed by fruits that are at first green and spiny. These turn brown before splitting open and releasing multitudes of black, pea-like seeds with a hard outer coating. This plant spreads by seed and underground rhizomes. 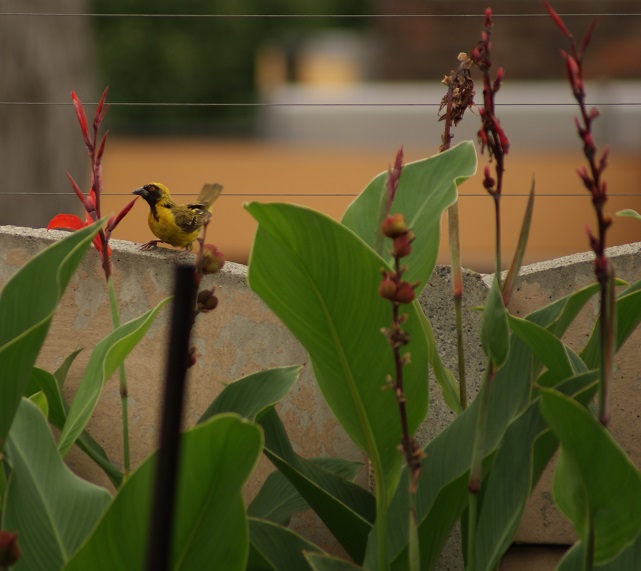 The seed pods are visible.

As with so many garden plants have proved to be invasive, Canna indica was introduced as an ornamental plant – they originate from the Caribbean and tropical America.

We had to rid our garden of several exotic cacti when we arrived – all too large for a previous collector to remove and definitely not child-friendly with all those spikes around! A row of Christ Thorn (Euphorbia milii) lined the front path, their scarlet flowers reminding me of gardens I frequented in my youth, when these plants were very popular. Over the last few decades we have planted numerous indigenous trees and as they have grown and created shade, these Christ Thorns withered so that I was sure we were going to lose them altogether.

Now that the drought has thinned out the vegetation and halted the spring flush of new leaves; now that there is no deep filtering of the sunlight, they are thriving once more and providing a tiny splash of colour in an otherwise fairly colourless garden. They need full sun to grow well and have certainly proved to be drought tolerant.

I need to don some thick gloves to move them to a better spot for, given good growing conditions, they flower for much of the year. These plants are native to Madagascar and have found their way around the world because of their suitability for growing in pots as well as in gardens – and the fact that they need little water to survive.

In keeping with doing whatever can be done to save water, the municipality had a number of large Eucalyptus trees cut down that were growing on the lawn at the entrance to our town. It was awful seeing – and hearing – these tall trees coming down, yet it is well known that they draw on a lot of subterranean water. They had to go. It has taken a long time to get used to a treeless place that casts no shade on hot days. Several indigenous trees were planted to take their place. All good – except that the young, unprotected saplings, have all been eaten by the various members of the Urban Herd that wander through to sample what is left of the lawn. Not one of those saplings have survived. There are a few large weathered logs that defied the chainsaws and were too heavy to move and a few lifeless stumps of the once tall trees. Lifeless?

Nature has its own way of fighting back!

If you have never read The Secret Life of Walter Mitty by James Thurber then now is the time to do it. We all daydream, but Walter Mitty’s escapism is in a class of its own. A memorable line is when he is fantasising about being a surgeon and takes over an operation while commenting seriously “Coreopsis has set in.” This is memorably funny because coreopsis is a flower! 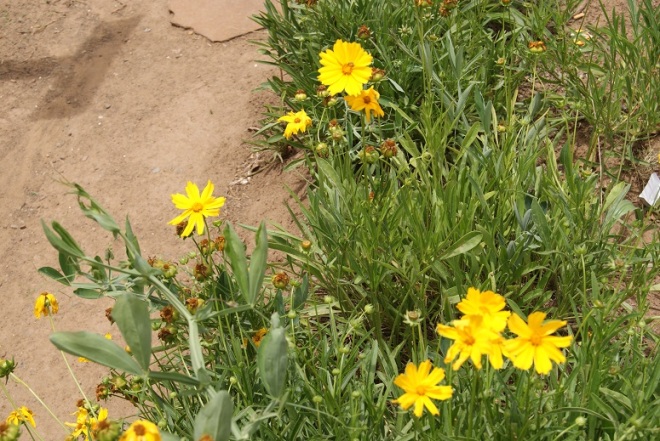 These pretty yellow blooms, commonly known as Tickseed, grew prolifically in our farm garden, so I was delighted to find a tray of seedlings in our local nursery last summer. As they had bloomed so bountifully, I rather hoped they would seed themselves in the garden – especially as one gardening guide helpfully states that “Plants will reseed themselves with a little encouragement.” The drought has put an end to anything trying to grow!

Coreopsis lanceolate were introduced here, like so many other plants, for their ornamental qualities. Even though they have not reproduced in my drought-stricken garden, it has spread so successfully elsewhere that it is regarded as a problem invasive plant particularly in KwaZulu Natal and in parts of the Western Cape. As with so many alien plants the coreopsis both competes with indigenous plants and are poisonous to livestock.

Having said this, local gardeners in other areas are encouraged to plant these late summer bloomers for a splash of colour that will attract butterflies in particular. I am still hopeful that – should we get rain – some dormant seeds might have survived to provide some colour in the garden later on for this drought-stricken garden is sadly lacking colour at the moment and I would enjoy it if the coreopsis were to “set in”!

This is my thousandth post since I tentatively began my blog in December 2013. Apart from trawling through my archives or wanting to find out more about me, the three posts that have attracted the most views since then have surprised me. This might be an appropriate time to tell you how they came about:

The most viewed post is Weeds with a History (https://somethingovertea.wordpress.com/2015/06/09/weeds-with-a-history/) published in June 2015. While only ten bloggers have ‘liked’ it and it took three years before anyone responded to it (thank you Joy!), the post about three of the most common invasive weeds in South Africa (Khakibos, Blackjacks, and Cosmos) has been viewed nearly eight hundred times. Are viewers interested in weeds, or does the ‘with a history’ attract their attention? It came about as a result of one of our many travels through this country when we were climbing up Yeomanry Kopje outside Lindley in the Free State to view the graves of British soldiers buried there during the Anglo-Boer War (1899-1902). As we walked through the inevitable swathes of Khakibos in the long grass it struck me then that these weeds had not existed in this country prior to that war. Having researched the subject, I gave a short talk on it at the Eastern Cape branch of the South African Military History Society. The interest shown there encouraged me to publish the post. 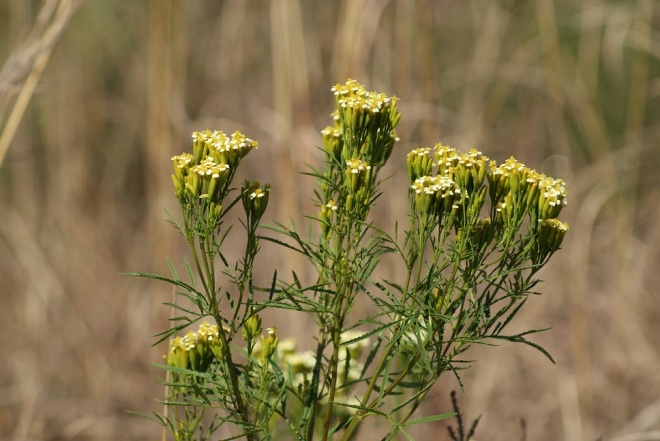 Following close on its heels – and closely related to it – is War Horses: the role of horses in the Anglo-Boer war (1899-1902) (https://somethingovertea.wordpress.com/2016/04/21/war-horses-the-role-of-horses-in-the-anglo-boer-war-1899-1902/) published nearly a year later. I have long been familiar with the Horse Memorial in Port Elizabeth, having first seen it as a child, but visiting the Horse Memorial on the campus of the Weston Agricultural College in KwaZulu Natal brought home to me the role that horses have played in war and in the Anglo-Boer War in particular. This post is very basic – written while I was feeling passionate about the topic but had not yet researched it deeply. Only nine bloggers have ‘liked’ it and Nature on the Edge is the only one to have responded (thank you Liz!), yet it has been viewed nearly seven hundred times. My interest in the topic grew and the more I found out about the role played by horses, the more I wanted to disseminate this. Thus I have since expanded it and addressed the Military History Society, The Grahamstown Historical Society, our local U3A and Friends of the Library – incorporating poetry and a variety of illustrations to embellish the message.

Surprisingly, the third most viewed post is on the topic of Flying Ants (https://somethingovertea.wordpress.com/2016/11/09/flying-ants/), also published in 2016. Although only four bloggers have ‘liked’ it and only Summer Daisy Cottage responded, it has been viewed close to four hundred times. We actually used to receive rain three years ago and I happened upon the alates emerging from the ground, having been alerted to this by the interest shown by a variety of birds in that particular section of the garden. I thought it would be interesting to record what was happening. Perhaps most of the viewers need to look up ‘flying ants’ for their school projects! 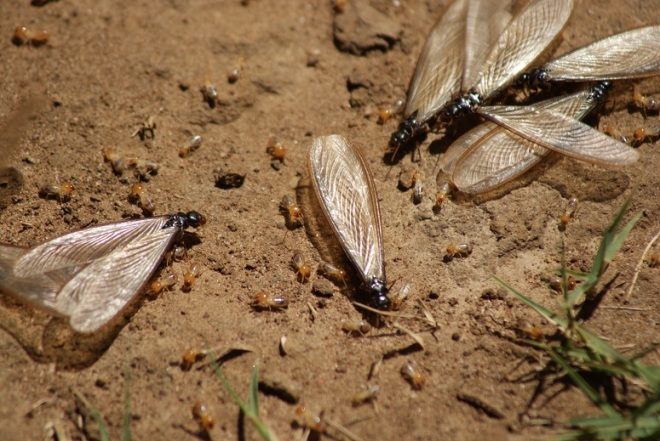 We are fortunate that we can drive only a few minutes from home and be within sight of wild animals. Their presence isn’t guaranteed for it is in their nature to move around according to the available grazing, water, the sun or the shade. Nonetheless, we often see zebra only five minutes away – they share grazing with a herd of cows on a farm – and only a few kilometers further on is a private nature reserve with a greater variety of game. 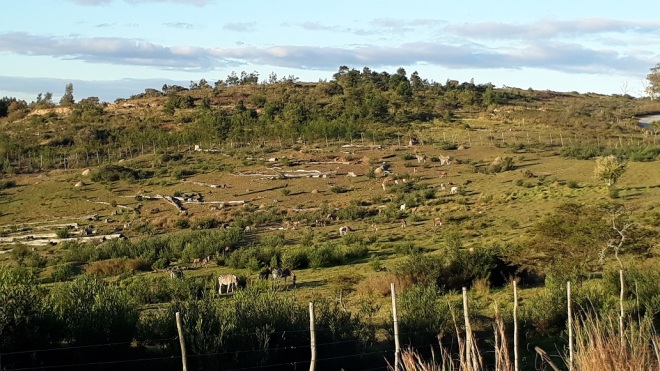 This is a scene I photographed at the weekend, showing zebra and a variety of blesbuck. The latter come in shades of their normal dark brown to completely white – why anyone would want to breed white blesbuck is beyond me. Nonetheless, these animals make a pleasant change from the Urban Herd, donkeys – and moths!

The grey logs are from Eucalyptus trees that were cut down years ago. Many of the scrubby bushes are a re-infestation of wattle, and the odd humps scattered in the background are termite heaps – there are a lot of them around here. At this time of the year the grass has been grazed down to within an inch of its life. Once again, we are sorely in need of rain – do not let that distant hue of green deceive you.

NOTE: Click on the photograph for a clearer view.

In its wisdom, our local municipality planted a row of Brazilian Pepper trees (Schinus terebinthifoliu) along the street that runs in front of our home. I say ‘in its wisdom’ – although, to be fair, this knowledge might not have been readily available forty odd years ago – because not only are their bright red, slightly fleshy fruits poisonous, but the sap of these trees is a skin irritant and affects the respiratory tract! How wonderful to have these as our street trees. 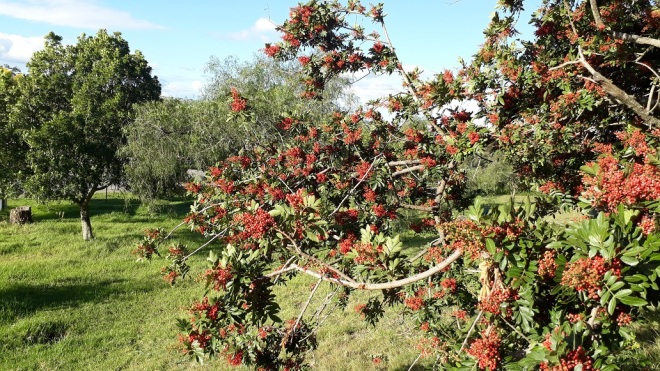 They were probably planted as ornamental trees because they are evergreen with wide-spreading, horizontal branches and the bountiful crop of fruits look attractive. Each of the fruits contain a single seed, most of which are dispersed by birds and animals.

The interesting thing is that this attractive tree is a Category One invasive alien, which means it is illegal to grow it in one’s garden – yet, here is a whole row of them in the street! The Brazilian pepper-tree is native to south eastern Brazil, northern Argentina and Paraguay. It is now classified as a highly invasive species that has proved to be a serious weed in South Africa. Any chance they will be removed by the municipality? Don’t bet on it.

NOTE: Click on the photographs if you want a larger view.