The year has started with its usual nonsense of having to be here, do that, go there, pull this, load that. We need a break – a real one – albeit out in the open. This pile of sand left over from some or other building operation is not only warm, it is soft and good to roll around on. Hey! We almost blend into our background – no-one will take much notice of us! 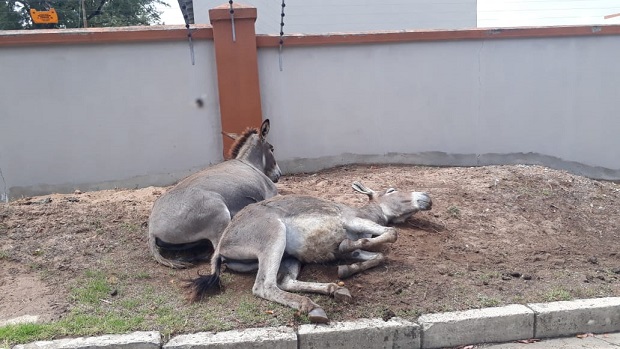 And so it was that I happened upon this pair of donkeys fast asleep on a pavement in the suburbs. When I stopped to look at them they opened their eyes, looked at me then fell back. The one on the right then bestirred itself to have a good back scratch while it rolled – then they both had more shut-eye.

Donkeys roam all over our town. The other day we came across one that had been waiting patiently at a gate, lost patience and began braying and stamping its feet. We assume it is used to being given a carrot or some other food there. Early one morning in another part of town we saw a donkey walking up and down along a stretch of the pavement when a woman came out, still wearing her dressing gown, with a basin of water and a bunch of carrots. “I feed them every morning”, she told us. In fact, driving around the suburbs, I have become conscious of several plastic basins of water placed on the pavements outside homes and imagine these are mostly for the benefit of donkeys.

Yes, these donkeys do have owners. They are occasionally rounded up to pull carts to collect firewood or to transport other goods from one place to the next. One can tell that not all have been treated well for many bear the marks of having been lashed, while others have open sores. An elderly couple were spotted recently rubbing salve on the leg of a donkey outside their home. Other donkeys have their tails trimmed in different ways, to differentiate one from another: I have seen several with the tail hairs cut short around the edges, leaving a long section in the middle; some tails have been cut straight at the bottom; others at an angle – all to make it easier for their owners to recognise them.

We have seen this particular trio of donkeys grazing in the veld on the hill opposite our house and have named them the ‘forest donkeys’. Okay, there is no forest there; there never was, but all the young trees that have been growing since the area was devastated by fire a few years ago have been eaten by herds of cattle that roam the area. 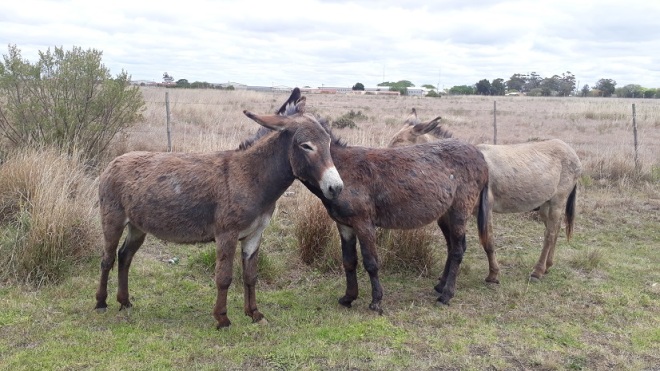 These donkeys are on the road leading to the army base on the edge of town – the buildings in the background – and are next to the aerodrome. The latter is well fenced and we have not yet seen any animals grazing on it. 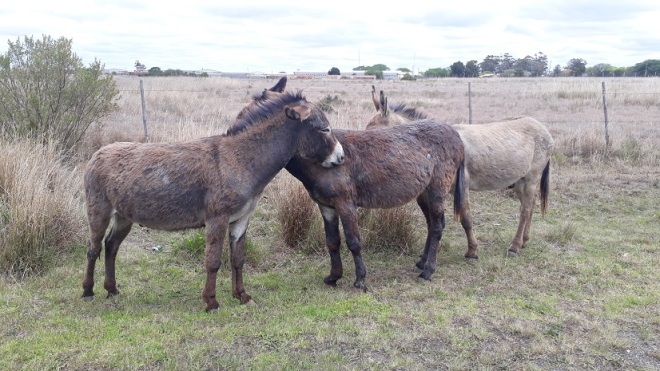 While donkeys do not belong in urban areas, we have become used to their presence and who can resist the plight of these creatures that are used and abandoned at will by their owners. Until this area receives the rain it so sorely needs, many kind-hearted residents will continue to provide water and carrots to help them along.

Apart from the various Urban Herds that invade our town, there are a number of donkeys that are let loose to find their own food along the grass verges – sadly many of them also break open the plastic bags of garbage if they are not collected in time. Some residents have started to place large containers of water outside their gates for the donkeys to drink – where else are they to find water in a drought-stricken town? Sometimes there might be a single donkey such as this one: 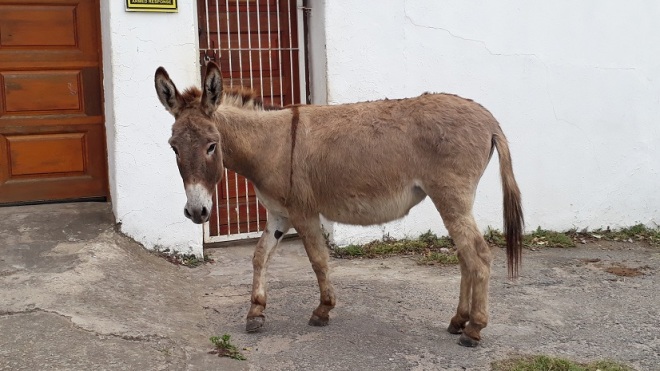 We came across these frisky donkeys in a side street – it is spring after all: 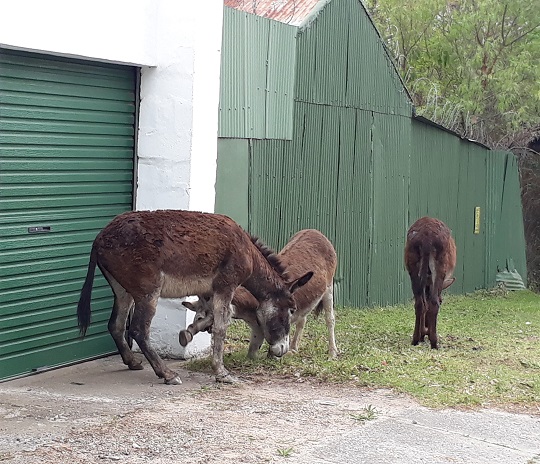 Three is a crowd 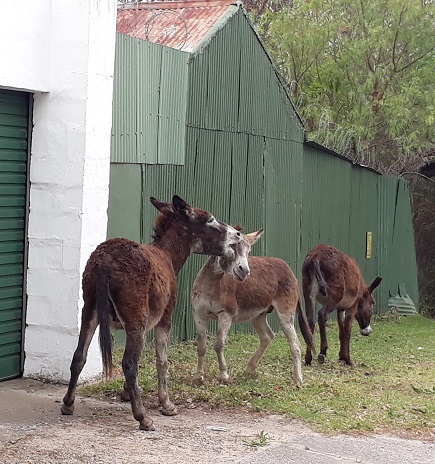 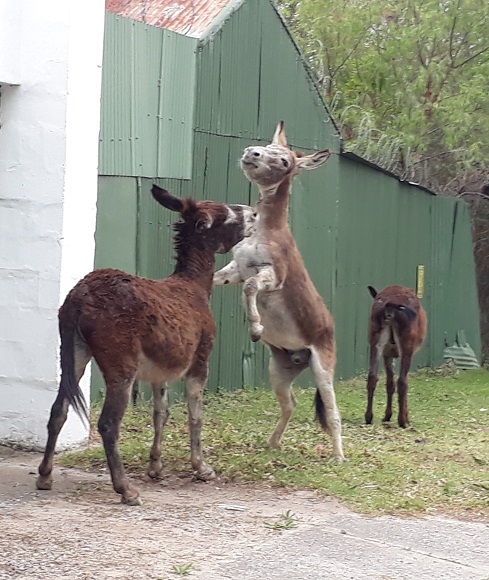 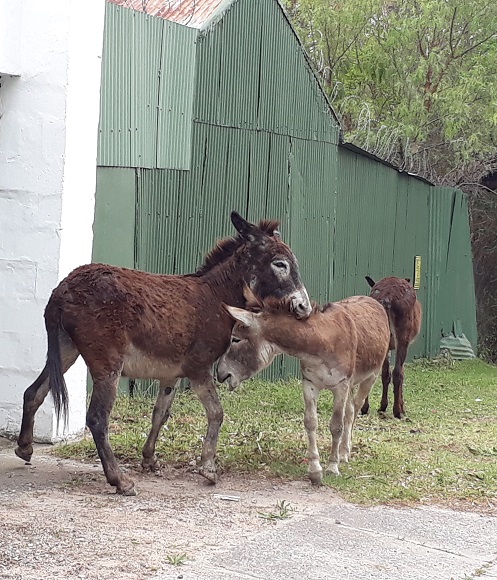 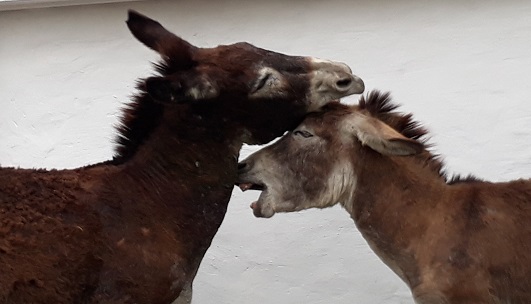 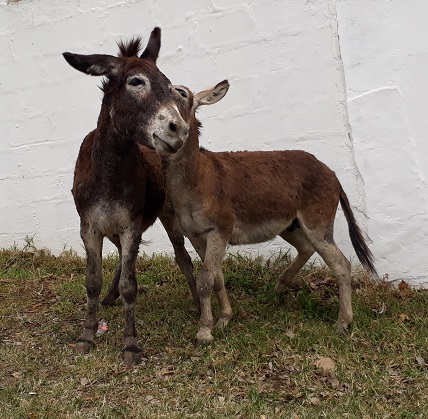 I have often written about the Urban Herd of cattle that roam around our suburbs in ever increasing numbers – there were over forty of them in what I have come to know as the ‘forest herd’ crossing the main road into town the other day in their search for grazing on what used to be a golf course. I have mentioned the presence of donkeys before, but there seems to be a proliferation of them too of late. They are still commonly used as a means of transporting goods. 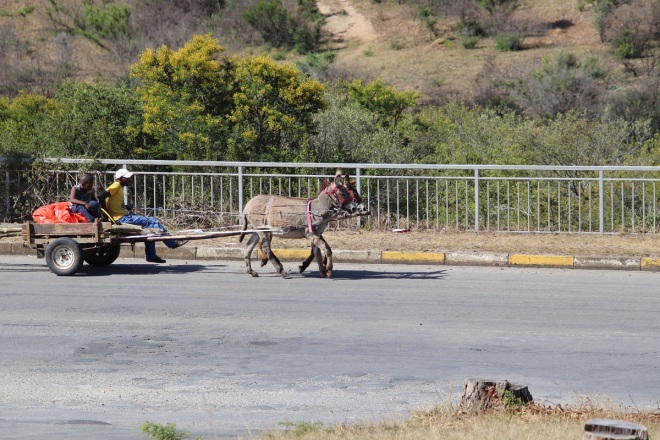 Unfortunately, not all donkeys are treated with the care they deserve.

Starve, scourge, deride me: I am dumb,

I keep my secret still. – The Donkey (G.K. Chesterton) 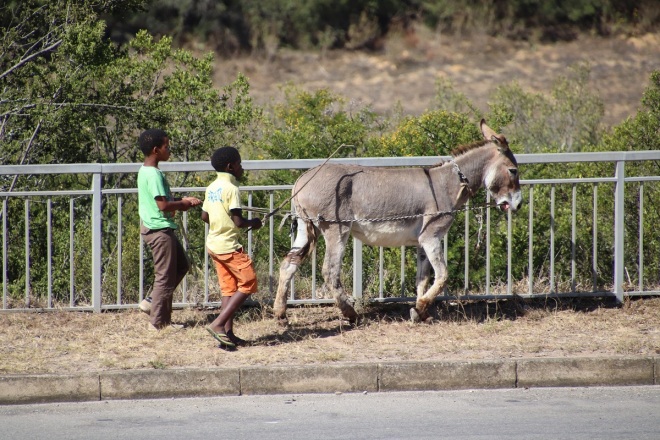 Donkeys also wander all over town, singly or in groups of up to six. They eat whatever they can find on grass verges and, sadly, even tear open the plastic bags of garbage left on pavements for collection. 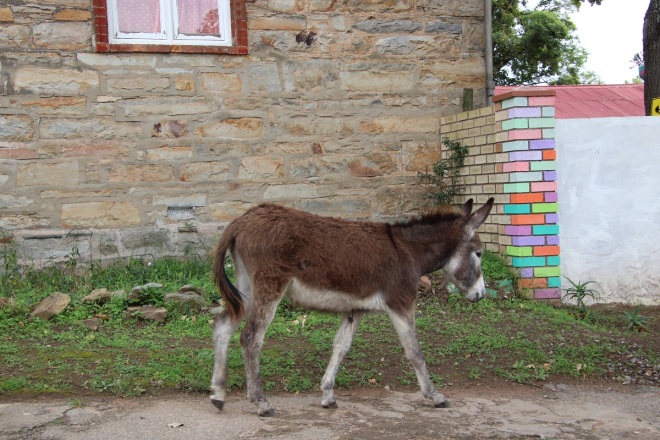 This is one of several donkeys that had been grazing just outside of town. It had stopped to munch another mouthful or two of grass. 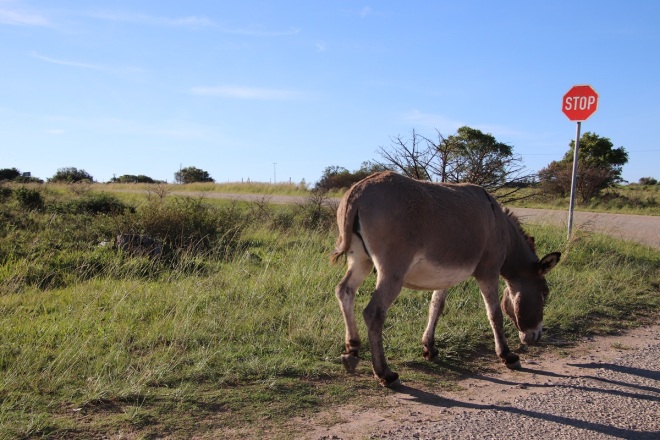 While the rest had already started their walk into town.

Fools! For I also had my hour;

One far fierce hour and sweet:

There was a shout about my ears,

And palms before my feet. – The Donkey G.K. Chesterton.

NOTE: Click on a photograph if you wish to see a larger view. 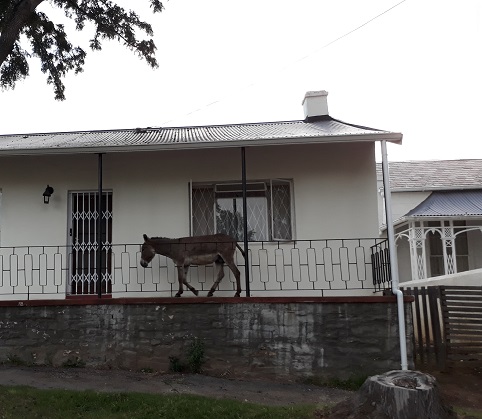 Not actually my veranda, but that of one the older houses in town which opens onto the pavement.

As with the Urban Herd of cattle, we often see donkeys roaming around the streets, usually in ones or twos – sometimes even threes. These ones are eating the kikuyu grass growing on a road verge on the outer edge of town. 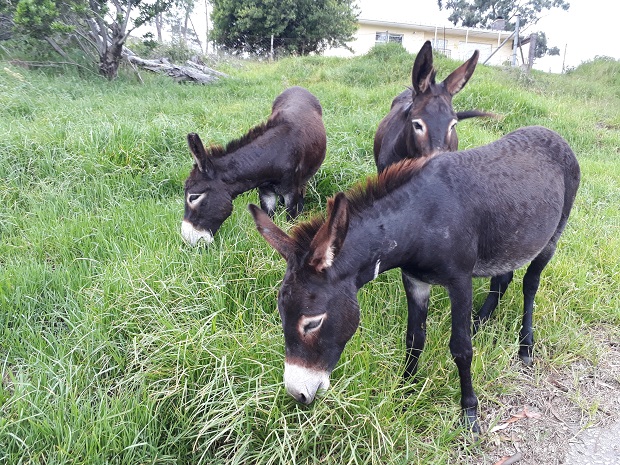 Seeing a donkey on someone’s veranda was unusual enough to photograph, yet, on the same day on someone else’s veranda there were five! 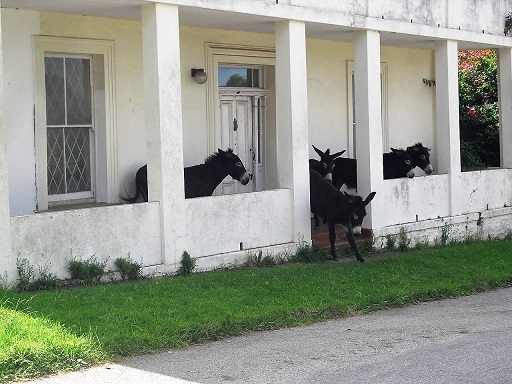 They remind me of a well-known Afrikaans song:

Who can forget that wonderful poem by G.K. Chesterton about the Donkey:

When fishes flew and forests walked
And figs grew upon thorn,
Some moment when the moon was blood
Then surely I was born.

With monstrous head and sickening cry
And ears like errant wings,
The devil’s walking parody
On all four-footed things.

The tattered outlaw of the earth,
Of ancient crooked will;
Starve, scourge, deride me: I am dumb,
I keep my secret still.

Fools! For I also had my hour;
One far fierce hour and sweet:
There was a shout about my ears,
And palms before my feet.

Something Over Tea
Create a free website or blog at WordPress.com.