We are woken at least half an hour before sunrise every morning by the loud greetings of the Hadeda Ibises that roost in the fig tree overnight. Their droppings are splattered on the ground underneath their perches and I frequently find their feathers dropped all over the garden. Less easy to see are their footprints: 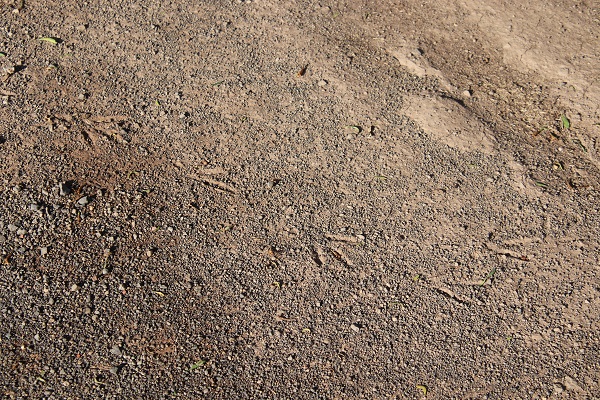 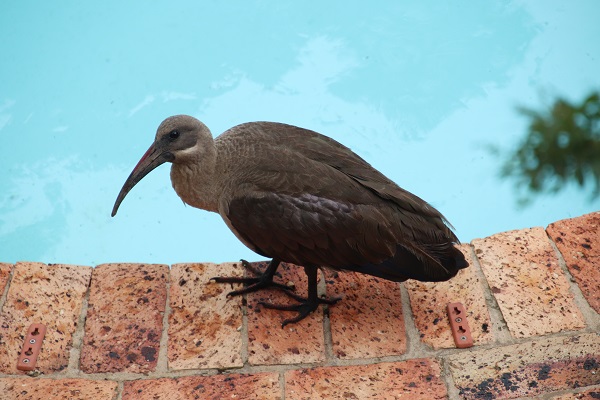 Although we have occasionally seen Vervet Monkeys feeding on the figs, they are not yet common in our town. We are more likely to see them along our roads and in national parks: 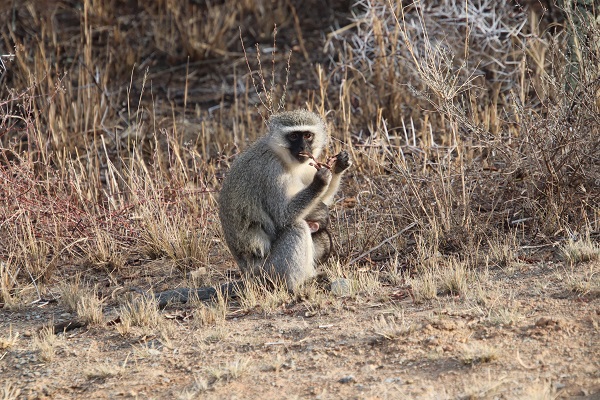 Of course one does not only have to rely on the spoor / footprints to indicate the passing of animals and birds. These droppings are a clear indication of a Chacma Baboon:

Moving to the coastline, it is easy to see where a seagull has been walking along the beach: 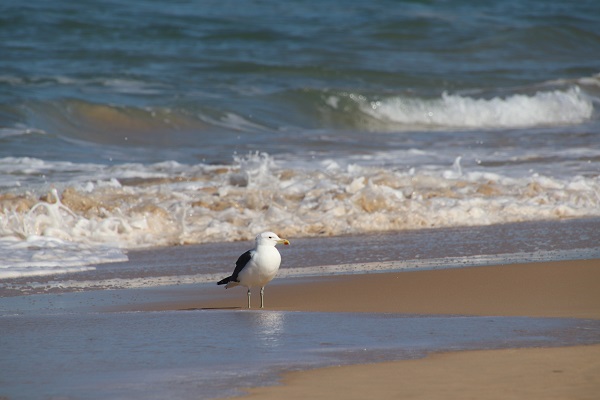 It is good to keep a close eye on the ground when walking to see what else has passed along the way before you.

Hadeda Ibises (Bostrychia hagedash) have appeared several times on this blog. Despite their considerable size, they tend to be overlooked and taken for granted. This might be because we have the dubious pleasure of hearing their waking calls before sunrise every day. They were originally birds of forests and wetlands, and their loud calls indicate an ongoing need to keep in touch with each other. Their distinctive and strident ‘ha-ha-hadeda’ calls can be heard from near and far as they raucously remind all in the valley of their presence – usually about half an hour before sunrise and again when they fly in to roost at the end of each day.

These rather elegant birds are fascinating to observe. They have very sensitive beaks and use the sense of touch rather than hearing or smell to find their food, such as earthworms, slugs, snails, crickets or other insects. I also enjoy watching Hadeda Ibises collecting sticks to build their unwieldly-looking nests: the male usually begins by presenting the female with a large stick. It is the oddest thing to see them flying in with sticks longer than they are in their beaks. Some nests are re-used the following year, with more sticks added to it.

While I only see between one and four Hadeda Ibises walking around our garden at any one time, I have seen up to thirty of them together either on school sports fields or in the veld. It is also good to see them on the edge of a dam.

The trees in our garden are now so tall and thick with foliage that it isn’t always easy to find the nests of birds, even if you know they are there – somewhere. A pair of Cape Robin-chats had me fascinated for days on end as they flew back and forth with food in their beaks … I never could find their actual nest deep in the shrubbery, although their offspring later made an appearance. Two Common Fiscals have plied the food trails to their respective nests for weeks (I think both have actually nested beyond our garden perimeter) and one brought its youngster to the feeding tray a few times before leaving it to fend for itself.

I located the messy nest of an Olive Thrush in a tangle of branches near the wash line, but not in a position to photograph – my neighbour couldn’t get a good photographic view of it either, although we both enjoyed watching the activity around it.This is one taken some years ago:

Much more prominent is the mud nest the pair of Lesser-striped Swallows build under the eaves every year:

The rain came at just the right time for them and they set to work straight away. The sturdy nest they built outside our front door one year has been taken over by White-rumped Swifts. Life is filled with trials for these swallows for this lovely nest, already lined with soft materials, fell down one night and shattered. Days of sad twittering followed until the pair again returned to Plan B and built a nest under the eaves around the shadier side of our house – where they have resorted to building in previous years – and this one has stayed put.

Also easy to see was the flurry of activity among the weavers as they set about constructing nests at the end of  branches of a tree in our back garden:

Despite the chattering and hard work going on here, within days these nests had been abandoned and the birds had looked elsewhere to create their happy colony.

A very-hard-to-miss nest, which I have featured before, is the one in which a pair of Hadeda Ibises have successfully reared two chicks: 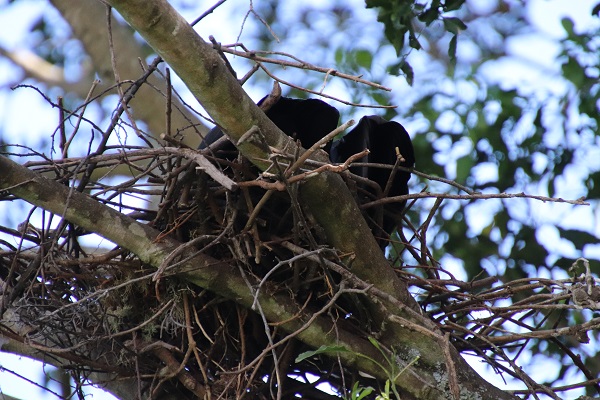 Both chicks are in the nest here – only their dark tails are showing.

We are woken well before sunrise every morning by the harsh cries of the Hadeda Ibises (Bostrychia hagedash) roosting in both the Natal Fig tree that dominates our front garden and the Erythrina caffra that towers over the back garden. Every year too there is at least one nest built in either of these places. This summer it was the turn of the Erythrina tree and we were able to watch the nest progress from the first  few sticks to the final bundle loosely packed in convenient fork in the branches – not far above my wash line. This meant that part of the line remained unusable for the duration of the nesting and hatching period.

For the next few weeks we could watch the Hadeda sitting on her nest to incubate the eggs. Actually, both parents assist during the incubation period; their plumage is similar, making it difficult to tell them apart. Despite the apparently flimsy structure of the nest, it was impossible to see through the grass lining. 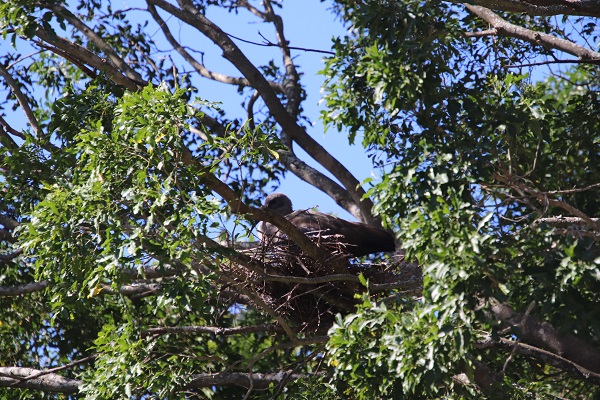 It must have been nearly a month before I came across the two eggshells below the nest. 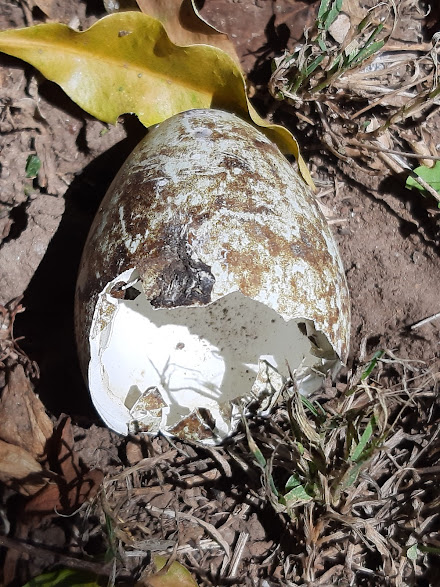 I could thus tell that two chicks had hatched. Would they be successful? Some years we have found a dead chick lying below the nest; mostly though, two and occasionally three chicks have been reared successfully. Time would tell. One day I noticed a chick standing up on the nest – the head of the other keeping a very low profile below it (on the right in the photograph).

The nestlings take roughly a month to forty days to fledge. I kept an eye on them every time I hung out the laundry. At last, both chicks were clearly visible.

Much later it became a common sight to see the mother and her youngsters inspecting the edge of the swimming pool or wandering through the garden. 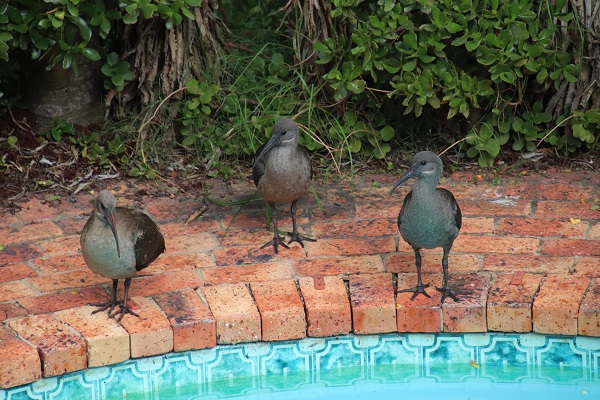 Despite their reputation of being raucous birds early in the morning and when returning to their roosting spots at the end of the day, Hadedas are surprisingly silent as they pick their way through the garden.

The rain received this month has been a glorious change from years of drought – not that the drought is broken. Nonetheless, our garden is green and filled with flowering trees. So quick has been the growth after the rain that even though I have already pruned around the bird feeders, I shall soon have to do so again if I want a reasonable view of the birds!

The White-rumped Swifts have been scything overhead in their daily search for insects and – alas – the Lesser-striped Swallows had just completed their mud nest when it fell down. This intrepid pair have built another one around the side of the house, where I hope they will enjoy greater success and get to rear at least one brood. The Laughing Doves continue to gather in the mornings, waiting for the seed to be put out. Recently they have been put to flight several times by the neighbouring cat which, sadly, has caught more than one of them during the course of the month.

The nest of the Hadeda Ibis has fallen apart since the two chicks have learned to fly and no longer need that sanctuary. Here they are inspecting our swimming pool. They still sometimes choose to lie down on the warm bricks and are occasionally accompanied by their mother.

The nectar-bearing flowers are on the trees and shrubs this month – Tipuana, Pompon, Cape Chestnut, Cape Honeysuckle, and Plumbago – and so I considered myself fortunate to get this shot of a Greater Double-collared Sunbird perched high up in the Tipuana tree. 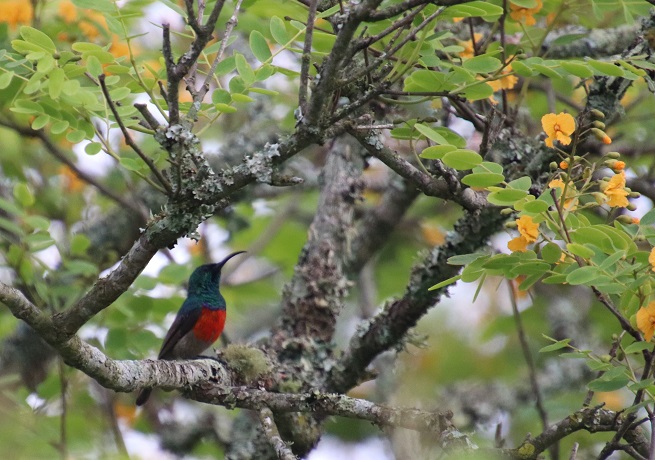 Although I featured Bronze Manikins last month, I cannot resist showing you this one swinging on a creeper in the front garden. These tiny birds have also been enjoying the seeds in the wild grass growing in our back garden. 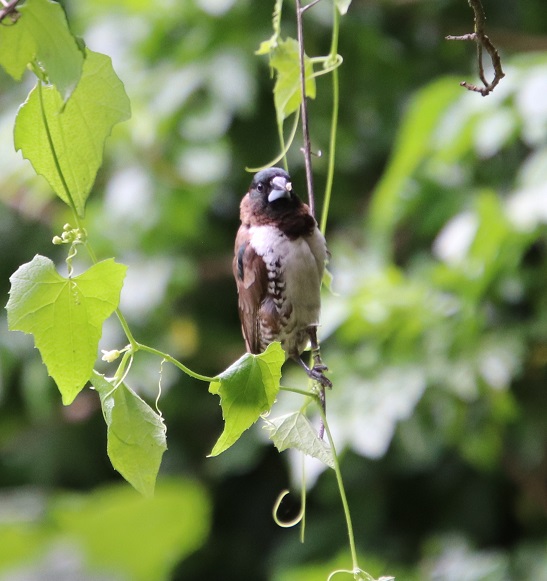 With all the comings and goings of the various Common Fiscals, I have been intrigued observing the progress of this offspring of Spotty. Having been brought to the feeding table several times, it has become more independent and is quick to chase other birds away.

Here it is perched on a branch with Spotty.

A strange phenomenon I have experienced for several years now is the annual December visit from a single Southern Red Bishop. It appears at the feeder for a day or two, then disappears not to be seen again for another year.

Apart from the weavers, regular visitors to the feeder are a pair of Grey-headed Sparrows. This one appears to be telling its mate to join in the seed feast.