Horses played a vital role during the Anglo-Boer War (1899-1902). Such was the demand for them that a large number of horses were imported to South Africa by the British from all over the world, including 50 000 from the United States and 35 000 from Australia – most of them landing in Port Elizabeth. A variety of breeds of horses were used during the war, including English Chargers and Hunters from England and Ireland as well as Australian Walers bred, ironically, from an original shipment of Cape Horses in the 1700s. The term ‘Waler’ was first used in India in 1846 in reference to the horses that had come from New South Wales.

At first glance these large animals appeared to be superior to the hardy Boer horses that were no larger than the average pony. These horses were also descendants of the famous Cape Horses of the 18th and 19th centuries. Some Boers used Basuto Ponies that were well adapted to the rocky, mountainous terrain and were known for their endurance despite their small stature. The Boer horses were exceptionally hardy and nimble for they were used for hunting as well as tending cattle in all types of terrain and weather conditions; proving to be reliable and well suited to the environment the war was fought in.

Of course war horses were workhorses, being used as mounted infantry horses, gun horses, and cavalry horses. Not only were horses ridden by soldiers, they were also used to pull gun-carriages – sometimes through muddy battle grounds or over rough, uneven terrain as well as having to ford rivers and streams. Horses and mules were also required to pull heavily laden transport wagons.

A horse’s life expectancy was around six weeks from the time of its arrival in South Africa. Sixty percent of the horses died in combat or as a result of mistreatment. Apart from being killed by bullets or shell fire in battle, other reasons for their demise included:

The number of horses killed in the Anglo-Boer War was unprecedented. When one considers that over 300 000 of them died during active service – not counting the horses on the Boer side – one can begin to appreciate how important these animals were in that conflict. The war lasted for 970 days, which amounts to about 309 British horses dying a day. The Boer horses also died in in their thousands, many ridden to exhaustion. Not unexpectedly, dead horses were not buried but tended to be left where they fell.

Because their lives depended on their mounts many soldiers formed strong emotional bonds with their horses. That horses were held in high regard by the men who worked with them is evident from the two horse memorials that have been erected in South Africa.

Only three years after the end of the Anglo-Boer War, the first Horse Memorial was unveiled in Port Elizabeth on 11th February 1905 to commemorate the horses which had suffered and died during that war. The inscription on the base reads:

This fact seems to have been missed by members of the EFF who vandalised the monument on 6th April 2015 by toppling the kneeling soldier in front of the horse – offering it water from a bucket.  This picture was published in The Herald 14th September 2015: 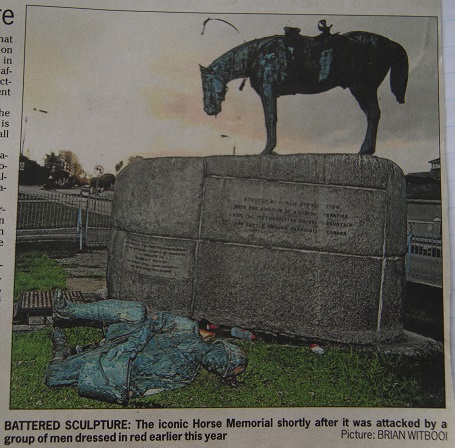 NOTE: On 7th May 2016 I was reliably informed by a resident of Port Elizabeth that the Horse Memorial has been repaired and is back to its former glory.

The other South African Horse Memorial is situated in the grounds of Weston Agricultural College in KwaZulu-Natal. It was unveiled on 31st May 2009 and is dedicated to horses, mules and other animals that perished serving men in war. Weston was the site of the British Army’s Number 7 Remount Depot, in service from 1899-1913. An estimated 30 000 horses and mules are believed to have been buried on the farmlands in the area. The memorial has been designed in a horseshoe shape, mounted by an obelisk-shaped monument created out of old horseshoes found on the farm. The inverted horseshoes of this centrepiece are in keeping with the tradition at a cavalryman’s funeral, where his boots are reversed in the stirrups on his horse. 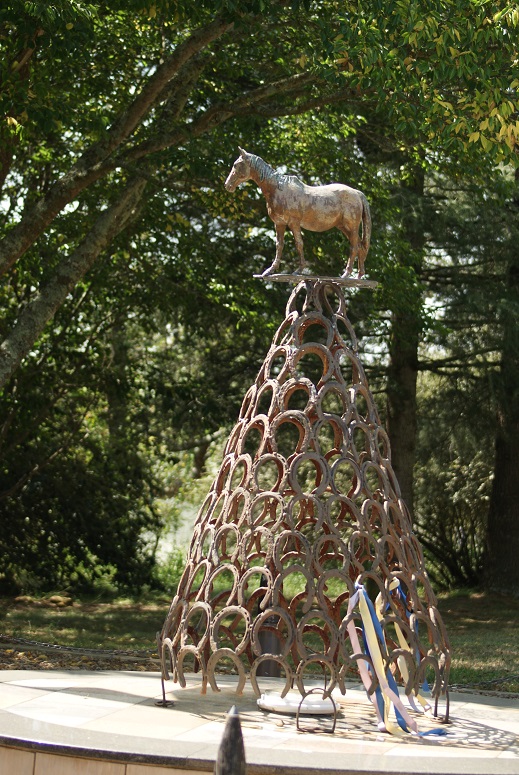 The structure is topped with a specially crafted bronze statue of a horse.

Three examples from the remembrance plaques clearly demonstrate how the war horses were regarded by the men they served: